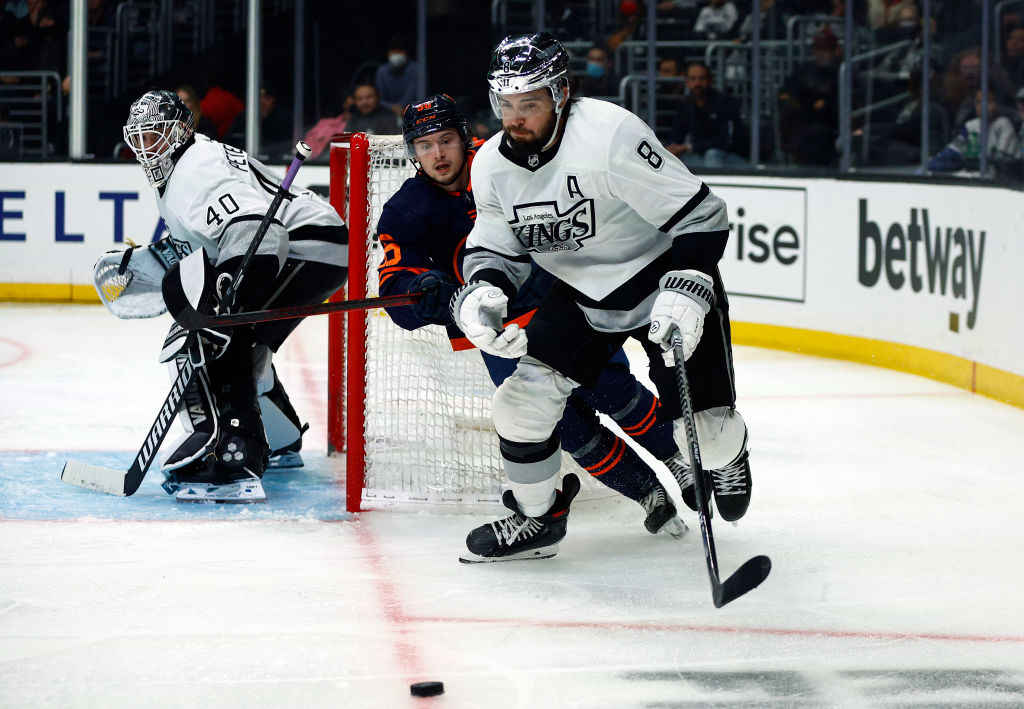 The LA Kings dropped their first game back from All-Star break, a 5-2 defeat against the Edmonton Oilers on Tuesday evening at Crypto.com Arena.

Forwards Arthur Kaliyev and Phillip Danault scored for the Kings, while goaltender Cal Petersen made 24 saves in defeat.

The Kings opened the scoring with the lone goal of the first period, coming off the stick of Kaliyev. After a great shift along the boards by the fourth line, Edmonton goaltender Mike Smith turned the puck over behind his own net, with Brendan Lemieux hitting Kaliyev in front for his ninth goal of the season.

Edmonton tied the game late in the second period, on a play that was originally ruled to be goaltender interference. After Connor McDavid drove the net, forcing a pad save by Petersen, the Edmonton centerman eventually got a rebound to go, after Petersen was taken out, though the contact was initiated by defenseman Mikey Anderson. McDavid’s tally was his 25th of the season.

The Oilers took their first lead of the evening with just under eight minutes elapsed in the third period, with Ryan Nugent-Hopkins getting the go-ahead goal. With Petersen once again taken out of position, this time due to contact with defenseman Tobias Bjornfot, Nugent-Hopkins found the puck in the low slot and fired home blocker side for his seventh goal of the season.

The Kings climbed back into the game, however, through Danault, to tie the game less than three minutes later. Carrying over a good shift between lines, Viktor Arvidsson fed Danault in point-blank range, with the centerman finishing for his 13th goal of the season, tying the score at two.

With less than five minutes to play, the visitors took a 3-2 advantage through forward Kailer Yamomoto. After a mis-exchange between Petersen and defenseman Matt Roy, Edmonton took advantage, with Leon Draisaitl feeding an open Yamomoto in front for his ninth goal of the season.

The Kings were inches away from tying the game, as both Danault and Doughty got looks from the slot in the final minutes, but were denied. Edmonton iced the game with two empty-net goals in the final stages, through Zach Hyman and Evander Kane.

On the start tonight, coming off the long break, and his overall thoughts
I liked the start, I thought physically we were there, we looked rested. I was concerned we’d be a little bit slow or sluggish and I don’t think we were that. Mentally, I don’t think we were as sharp as we have been. Tight-checking game both ways, not a lot of space, not a lot of room and you better be sharp upstairs in those situations and those moments. When I look at the goals they scored, they were all kind of similar. They were on our tape, Mikey’s turnover in the neutral zone, we had a breakaway opportunity with Durzi, Toby chases behind the net and even the last one with the broken stick. It’s 2-on-2 down low and all of a sudden it’s 2-on-0 and that’s just mental, that’s not, not knowing. Physically, actually maybe better than I thought it would be, mentally not good enough.

On the team’s improvements on the penalty kill this evening
We did some good things on the penalty kill, our timing was good, we were sharp in those situations. Sometimes, the penalty kill doesn’t need that fine skill, it can just blow plays up. On the other side of the coin, the power play wasn’t as sharp as it needed to be, I’ve been saying that for awhile. We had opportunities, we slowed it down a little bit, individuals that would normally shoot the puck were looking for passes. Still a work in progress, but the penalty kill did a good job, against a good power play.

On if he felt the team was going to tie the game in the last few minutes
Well, we got a hell of a look. Their winning goal and our pulled goalie opportunity were kind of the same play. Fortunately for them, Smitty got a pad on it and Cal just about got a pad on Yamomoto’s goal. Similar plays, different situations.

On the ceremony for Drew Doughty tonight
We’ve talked a lot about this, on the road in New York and prior to today’s game. It was a great ceremony for a great player, he deserves all of that recognition and more. It’s unfortunate he won’t remember it as a win, but it was a pretty competitive night for him and for others.

Notes –
– Drew Doughty (0-1-1) registered his 431st career assist, tying Bernie Nicholls for sixth on the Kings all-time assist list. He has points in each of the last three games (1-2-3).
– Doughty’s assist came on the night that the Kings honored his 1,000th career NHL regular-season game. Tonight marked the first home game for the Kings since the milestone.
– Phillip Danault (1-0-1) scored his 13th goal of the season, tying his career-high (2019-20, 2016-17). Danault is tied for fourth on the Kings in goals scored this season.
– Arthur Kaliyev (1-0-1) scored his ninth goal of the season. He has goals in each of the last two games. His nine goals rank tied for ninth in the NHL among rookies.
– Viktor Arvidsson (0-1-1) registered his 17th assist of the season and has five points (3-2-5) over the last four games.

The Kings are set to return to the ice for practice tomorrow at 11 AM at Toyota Sports Performance Center.