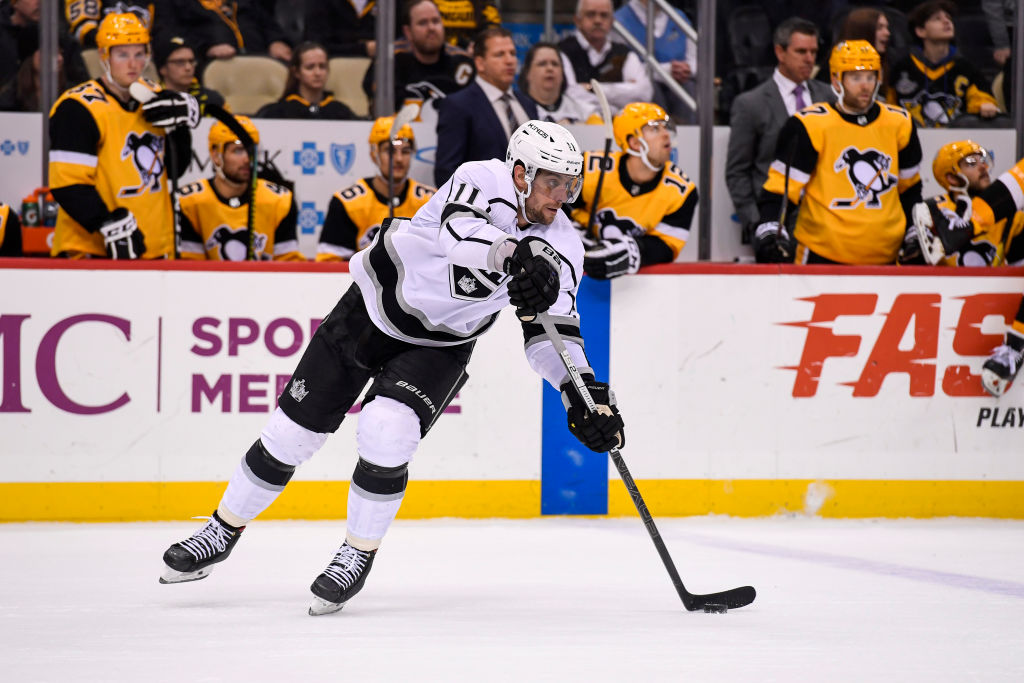 TONIGHT’S MATCHUP: We’ve reached the penultimate game of a six-game road trip, with another early-afternoon puck drop on the East Coast.

HEAD-TO-HEAD: The Kings took the first meeting of the season by a 6-2 margin over the Penguins earlier this month, powered by three goals during an 83-second span in the third period. Anze Kopitar (2-1-3) and Sean Durzi (1-2-3) led the Kings in that victory with three points apiece. Dustin Brown had a goal and an assist, while Alex Iafallo and Trevor Moore had two assists each. All-in-all, the Kings saw 10 players currently on the roster collect a point in the win.

KINGS VITALS: With two games left on the road trip, the Kings have put together a four-game unbeaten in regulation streak, with two victories and two defeats in overtime or the shootout to date.

Considering the back-to-back set this weekend, the expectation is that Cal Petersen will be this afternoon’s goaltender against the Penguins. Petersen, who has five wins from his last six starts, is in line to make his second career appearance versus Pittsburgh. The Iowan made 35 saves on 36 shots in a 2-1 victory in Los Angeles back in February 2020.

With the combination of a back-to-back and an afternoon puck drop, the Kings did not hold a morning skate today in advance of the game in Pittsburgh. With that in mind, no confirmations on today’s lineup, however defenseman Mikey Anderson (upper-body injury) will not play this afternoon against the Penguins. Anderson did not return with the team to begin the second period, with Todd McLellan referencing a puck he took to the face in the first period as the reason why.

Welcome to the lineup, Jacob Moverare and Austin Strand!

The Kings will also be without defenseman Matt Roy, who entered into the NHL’s COVID Protocol this morning. Roy is unavailable for this evening, so enter in both Jacob Moverare and Austin Strand on the backend this evening.

For reference, here’s how the Kings lined up yesterday, marking the second straight game with the same lineup –

PENGUINS VITALS: The Penguins have not lost a game in regulation since they met the Kings back on January 13. Pittsburgh rattled off six straight wins following that defeat, before it collected one point in each of the last two games.

Pittsburgh captain Sidney Crosby enters this afternoon’s action on the verge of joining a historical club, sitting on 497 career goals. When he hits 500, Crosby would become the 46th player to achieve the milestone. Here’s to hoping it comes soon for one of the all-time greats……but preferably not for a couple more days.

Tristan Jarry had started 11 of the team’s 12 games before he got a night off last time out, so we’ll assume he’s back between the pipes this afternoon against the Kings. Jarry made 39 saves in a losing effort a few weeks prior at Crypto.com Arena. All-time against the Kings, Jarry is 1-2-0, with a .890 save percentage and a 3.92 goals-against average.

Per the Pittsburgh team account, here’s how the Penguins lined up last time out against Detroit-

The Penguins currently have two regulars on injured reserve – forwards Teddy Blueger and Jason Zucker. Both players are out long term and neither will participate in today’s game.

Starts With The Start
The Kings entered yesterday afternoon’s game coming off of two, very good starts on the road.

Against the Rangers, the Kings were great in most areas on the ice and frankly deserved to be a goal ahead rather than a goal down. They corrected that against the Islanders on Thursday, leading 1-0 following a tight-checking, strong effort.

For whatever reason, that same level was not there in the opening 20 against the Flyers yesterday. Forward Viktor Arvidsson said he felt that Philadelphia was the faster team in the first period, as well as the more detailed team. The Kings led narrowly in shot attempts and scoring chances in the first, while trailing narrowly in high-danger chances. That period though was one when the puck possession metrics really didn’t tell the story of the game.

We’ve seen what a good first period looks like for the Kings twice over the last week. Yesterday’s start saw the Kings slow to establish the forecheck, not sharp in connecting tape-to-tape passes and not checking to the level they’ve been accustomed to as of late. In Todd McLellan’s eyes, it was that combination of factors that put LA off its usual flow in the first period.

“We didn’t have a lot of pop, we didn’t get our forecheck going at all,” he said. “When we did, we had a chance to hem them in for a little bit but it wasn’t consistent enough. We didn’t check well enough, we missed assignments, we were loose, the first goal was a prime example. Usually, when you’re not checking well enough or tight enough, and don’t have enough polish at the other end, you’re not winning.”

Getting off to a better start will certainly be a key this afternoon against Pittsburgh. While the Flyers played a good game yesterday, the Penguins, 17 games over .500, present a different challenge. With elite offensive talent, Pittsburgh makes teams pay for loose mistakes and defensive breakdowns.

Getting off to that smoother start is something to look for early this afternoon.

Arvi The Assassin
Forward Viktor Arvidsson collected his second multi-goal effort as a member of the Kings yesterday, with the team’s first two goals in the overtime defeat.

Arvidsson has really found a nice home on a line with Phillip Danault this season. Of late, it’s been Trevor Moore on the left on that line, with the trio playing energetic, effective hockey for the Kings.

When playing with Danault, Arvidsson has been on the ice for 18 even-strength goals for compared to just seven against. Controlling more than 61 percent of shot attempts when paired with Danault, and more than 60 percent of both scoring chances and high-danger chances, it’s been a nice match so far, showcasing Arvidsson’s best qualities in the process.

Arvidsson has been a great volume shooter, who is now getting more of those shots to go over the last month, while also contributing as a playmaker for his linemates. At .71 points-per-game now on the season, the Swedish winger is scoring at his highest rate since the 2018-19 season, a total that is certainly welcomed by the Kings.

Work Of Cart
The Kings will face off against their longtime teammate, the newly extended, Jeff Carter this afternoon in Pittsburgh.

“It’s been a good fit all around, and it was an easy decision for us,” Carter said, of signing the extension. “I’m getting to the end of my career here and I want to win. You look at the team we have and the group we have, it’s got a lot of potential to do something special. That was a big part of it and the other side is my family really likes it here, they’ve adjusted well. It’s close to a lot of my wife’s friends and family, and my family as well.”

With 38 games down, approaching 39 this afternoon, Carter is quickly approaching the 50 games played mark, a number which would upgrade the draft pick received by the Kings in last season’s trade. If Carter plays at least 50 regular-season games, the 2023 fourth-round selection would be upgraded to a 2023 third-round selection heading the Kings’ way.

Overall in a Pittsburgh jersey, Carter has 37 points from 52 games played, good for a rate of .72 points-per-game. That’s actually a slight uptick on his career totals, which fall just under .70. Good for the veteran forward on continuing to be a very effective player in his new home.

Arvidsson and the Kings take on Carter and the Penguins today at 1 PM. Brew the coffee, Insiders, we’ll see you soon!

By Zach Dooley
1,828 Comments
Behind the Scenes

By Zach Dooley
160 Comments
Behind the Scenes