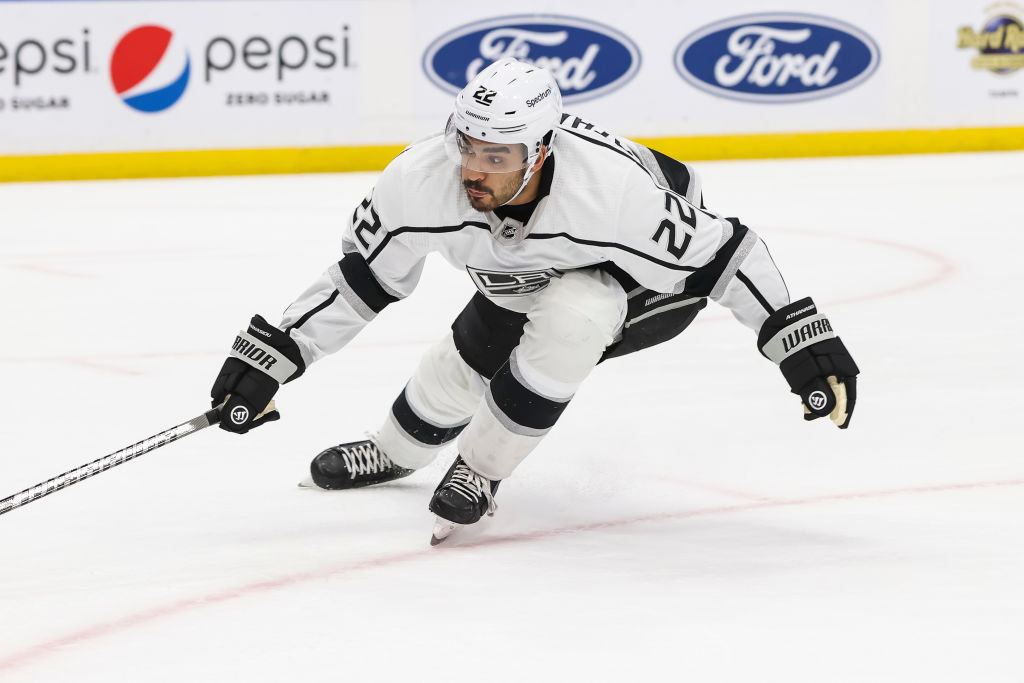 The Kings skated this morning in Philadelphia in a bit of a “clean out the legs” style of practice, getting those who played heavier minutes on the ice for a short, fast-paced and clean skate, while those who didn’t, or likely won’t play tomorrow, took a more intensive skate with consecutive afternoon games.

The Kings enter today off of a 3-2 victory over the New York Islanders, bringing the roadtrip to date to a 2-0-1 record. With games on consecutive nights here against a desperate Philadelphia team and a high-flying Pittsburgh team, followed by the final game before the All-Star Break in Detroit, there are challenges still to come for the Kings, beginning with the “most important game of the trip” tomorrow in Philadelphia, as the next game always is.

The Kings had everyone on the ice and accounted for today, with 14 forwards, eight defensemen and three goaltenders taking part in this afternoon’s practice at Wells Fargo Arena.

Here’s how the group aligned today

Thriving Thrid Line
Both of the goals scored last night by the LA Kings, with a goaltender in the net, came from the team’s newly constructed third line.

Quinton Byfield scored his first career NHL goal in the first period, before Andreas Athanasiou doubled the lead with just 5.1 seconds remaining in the second period. Assisting on both goals? Dustin Brown. A huge swing and a huge contribution from the least consistent line, in terms of personnel, that the Kings have had this season.

Largely, that lack of consistency has fallen outside of the control of those involved. Typically, when injuries or COVID issues have impacted the Kings, those issues have directly impacted that third line most of all, the first line to have things shuffled. Now, the Kings have the three currently assembled pieces healthy and active. A sign of possibility for that unit.

“We’ve thought we’ve had the pieces all year, it’s just meshing them together and keeping them together for a little while, so they get some unity and some consistency,” McLellan said this morning.

For the current pieces on that line, the Kings have finally gotten all three together at the same time. As pieces have shuffled and moved around, all three current members of that line have missed time due to injuries, positive tests and illness. While not necessarily a line that was thought of at the beginning of the season, right now, there is an opportunity for some consistency between Byfield, Athanasiou and Brown. McLellan weighed in on those absences today.

“Brownie has had COVID and was sick, Athanasiou has been in and out of the lineup multiple times, Q’s start to the season and then COVID, it’s been a complete mismash of players, Grunny who fits that line well too, COVID, Lias hasn’t played in a month of Sundays, it’s been tough for them to generate any type of cohesion or unity, because of circumstances that are largely out of their control. Hopefully we can get to that.”

For those on the ice, speaking with Athanasiou today, he felt that things came together quickly with the trio of forwards.

Not that there was much of a choice, with a limited time together, but it was good to see them get off to a good start yesterday.

“I think right off the bat we were playing pretty solid,” Athanasiou said. “I think we only had one practice together, but it’s something you’ve got to do quickly, but that goes with any of the guys throughout this whole lineup. They’re all so good, we all play well together. We move parts in and out anywhere pretty much, and you can see that click happening pretty quick here.”

Andreas The Giant
Speaking of Athanaisou, the skilled, shifty winger made his return to the lineup in a big way last night, with two points in the win over the Islanders.

First and foremost……what a shot! Athanasiou absolutely picked his corner from a sharp angle in the left-hand circle, sniping a shot past New York netminder Semyon Varlamov to double his team’s lead late in the second period. A huge momentum swinger, at a huge time in the game.

“I knew there was a little bit of time left when I picked it up and I was near the bench and I heard them talking a little bit, to shoot,” he explained. “I wanted to see if anyone was going to the net, to throw one maybe down along the ice, but I didn’t see anyone there. It was just kind of throw one on net and it found its way home.”

The higher pace, higher tempo style of play that the Kings have utilized so far this season has meshed well with Athanasiou’s skills and natural abilities. A strong skater, Athanasiou has played with pace his entire life.

With the way the Kings have improved so far this season, and changed their approach, he feels that his style has fit in quite well with the new approach.

“I think it’s been good and I think it complements my style,” he said. I can bring a lot to the table with my speed, offense and defense, and it fits in well with the system we play and the players we have on this team. It works out perfectly, playing with the D and with the forwards.”

McLellan has always seen the high-level skill that Athanasiou brings to the table. It’s hard not to notice it.

For Athanasiou, however, it’s getting that highest level on a nightly basis, and that’s where the coaching staff is focused. Having a healthy and fully contributing Athanasiou iin the lineup is such a massive boost for the Kings, and they’re hopeful of seeing it regularly here down the stretch.

“I think that Dubs, he’s very capable of playing, night in and night out at a very, very high level. He can contribute, I think, anywhere from line one to line three, and on the power play. Getting the consistency in his game is what we’re going to shoot for, now that he’s back and got a game under his belt, he hasn’t had the chance to do that all season. If we can get him playing consistently with his speed and skill, and that hardness too, the grit, I think we have a hell of a player.”

Sutter 1K
Lastly, and we’ll have a more in-depth look at this in the coming days from Reign contributor Jared Shafran, but stick taps to Ontario Reign Captain Brett Sutter on his monumental achievement last night in San Jose. Sutter played in his 1,000th career professional game, with 940 at the AHL level and 60 in the NHL.

Sutter is the ultimate leader, and the ultimate team player, and has played a huge role in helping to develop prospects who are now contributing at the NHL level with the Kings. General Manager Rob Blake has touched on Sutter’s impact in the past, and getting to that mark, playing predominantly in the American Hockey League is an incredible feat.

Per the AHL, Sutter currently ranks 12th all-time in games played in that league. Assuming he stays healthy, he is on track to enter the league’s all-time Top-10 later on this season, currently 15 games shy of that achievement.

One of the best I’ve worked with, a great person, player and leader. Congrats to you, Sutts.

What makes hockey so great is the people. Tonight my team made my night one I’ll never forget. Thanks for everyone along the way. Can’t wait for the next 1000. pic.twitter.com/cqC2NeUDiX

The Kings are set to return to action tomorrow afternoon at 1 PM at Wells Fargo Arena. Considering the afternoon game, the team is not slated to hold a morning skate in advance of the game. Until then, Insiders!

By Zach Dooley
824 Comments
Behind the Scenes

By Zach Dooley
526 Comments
Behind the Scenes