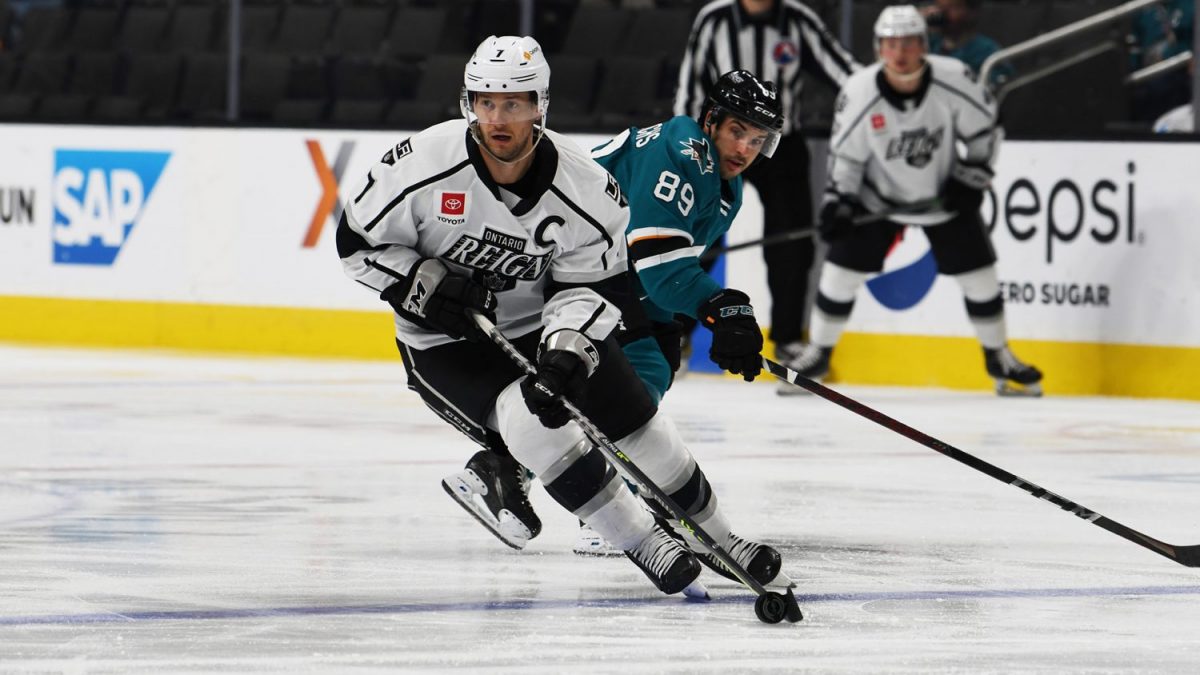 On a night highlighted by captain Brett Sutter playing in his 1,000th professional game, the Ontario Reign (22-6-3-2) scored the same amount of goals as the number on their leader’s back, soaring past the San Jose Barracuda (14-21-1-0) 7-1 on Thursday night at the SAP Center. With the victory, Ontario moved into first place in the Pacific Division standings with a points percentage of 0.742.

Forward Gabriel Vilardi netted two goals in the contest, while forward TJ Tynan had a goal and two assists and defender Christian Wolanin recorded three helpers. Sutter, the night’s honoree, picked up the first assist on Tynan’s goal and finished with a +2 rating

More from Reign Assistant Coach Chris Hajt and Sutter below.

Ontario netminder Matt Villalta stopped 39 shots in the contest to improve his record to 13-2-3 on the season.

The Reign got off to a fast start, scoring twice in the first two minutes of play to take an early lead. First, Martin Frk scored his team-leading 19th goal of the season at 1:05 from Tynan and Wolanin to make it 1-0 before Vilardi added on at 1:59 with his ninth goal of the year to extend the advantage to 2-0.

Vilardi took hold of a loose puck in front of the Barracuda net and beat goaltender Alexei Melnichuk with a quick wrist shot. Assists on the play were credited to forward Samuel Fagemo and defenseman Markus Phillips.

Scott Reedy got San Jose back within a goal by scoring at 12:26 of the first, but after an excellent goaltending display from Villalta that included a save on a 2-on-0 chance, Ontario went back up by two on forward Austin Wagner’s second goal in as many days. Wagner put home a rebound from the inside of the left circle for his eighth tally of the year, assisted by Wolanin and forward Aidan Dudas.

Vilardi, Wagner and Tynan have scored goals in all three of Ontario’s games against the Barracuda this season.

Defenseman Helge Grans scored the fourth goal of his rookie season at 3:45 of the third to make it a 4-1 game in favor of Ontario. Wolanin recorded his third assist of the night on the play along with forward Tyler Madden.

Vilardi added on at 10:50 of the third with his second goal of the night on the power play from Tynan and Jordan Spence.

Finally, in a span of less than a minute, Tynan and Fagemo found the back of the net to complete the scoring for the Reign. Sutter and defender Cameron Gaunce registered assists on Tynan’s tally, while forward Alex Turcotte had the lone helper on Fagemo’s 11th of the year.

Vilardi’s power play marker was the lone special teams goal of the evening, as Ontario finished 1-for-3 and held San Jose to 0-for-5 on the man-advantage. Barracuda goaltender Alexei Melnichuk stopped 21 shots in a losing effort.

Chris Hajt
On what Sutter’s 1,000th game meant to everyone in the organization
It was a really special night. Unbelievable captain, even better person. It was a special night. We’re really happy for Brett and everything he’s done in his career. You can see this shirt and different things that were done by the training staff that were outstanding to celebrate tonight and it was nice to get the lead early and obviously build on it come the third period and get some goals and Brett got an assist. Guys were definitely happy for him, the organization, everybody, we can’t thank him enough for everything that he’s done for us but also celebrate his career and what he’s done and I’m sure his family and close friends are so proud of him.

On the team rallying together to celebrate the night with Sutter
He cares so much about all his teammates and wears his heart on his sleeve, he’s the best leader I’ve seen and he just comes to work every day, cares about his teammates, he’s always there for everybody and puts them ahead of himself and good for him to have a successful night individually and made a difference in the game and guys pull for him for sure.

On what some of the keys were to be able to win 7-1
Well we started off really well. Obviously had the 2-0 lead and then kind of sat back. Matty V made a ton of really good saves on some breakdowns. They kept coming and had opportunities to put pucks behind him and I thought he played very well and then eventually we were able to get some more goals and pad the lead a little bit. But they came out and they worked very hard and when they made it 2-1 they kept coming and they stayed with it and Matty V made some great saves and we were able to eventually get the cushion. Definitely not the most perfect night but we’ll take it.

Brett Sutter
On the night as a whole
Lots of emotion for sure. What makes hockey such a great game is the people in it and the team certainly made tonight a special night for me including the trainers and the staff. Just a great night all around. It was a ton of fun. The last few days, reflecting on the past and the people that got you here was a pretty emotional time and then once you get to the rink you try to dial it in and get back to game mode but it was definitely a ton of fun.

On the team and everything they did to make the night special
They were great. They had a ton of fun, they might have even had more fun than I did with it. We’ve got a great group in there. There’s not a single outsider. Everyone loves each other like a brother and I think that’s what’s going to make this a special team. They certainly made it hard to focus before the game but we had a lot of fun doing it and this is one I will never forget.

On how it feels to move into first place with the win
That’s the goal. That was something that was brought up before the game to focus on. We want to be at the top of the mountain so it was good to get the win, I don’t think we played our best tonight but sometimes on the road you don’t have to be perfect to win and in the third period when it matters most we played a heck of a game so I’m proud of the guys.