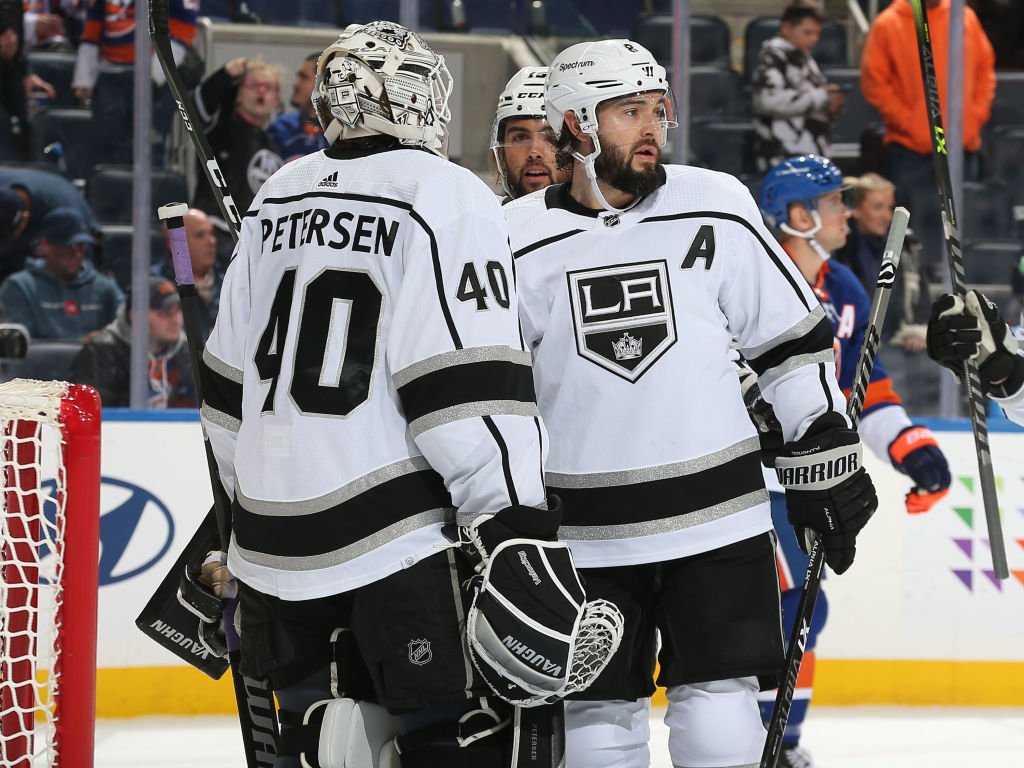 The LA Kings celebrated Drew Doughty’s 1,000th regular-season game in style, with a 3-2 victory on the road over the New York Islanders.

The visitors opened the scoring late in the first period as Byfield netted the first goal of his NHL career. After he received a pass from Athanasiou in the neutral zone, Byfield weaved his way into the attacking end, created space on his forehand and snapped a blistering shot past New York netminder Semyon Varlamov on the glove side to open his NHL account.

With less than 10 seconds to play in the second period, the Kings doubled through advantage through Athanasiou. From a nearly impossible angle wide on the left, Athanasiou picked the corner across the grain for his fourth goal of the season, giving him a multi-point night in his first game back from injury.

The final two minutes and five seconds saw three total goals, bringing the scoreline to a 3-2 final in favor of the Kings.

First, the Islanders pulled one back through forward Matthew Barzal, who went high on the blocker side from the left-hand circle to pull his team back to within 2-1. Following an empty-net goal from Adrian Kempe, his 18th of the season, New York scored inside 20 seconds to play, through Casey Cizikas, though it did not affect the end result, a Kings victory on the road.

On getting his first goal during tonight’s game
I was definitely super excited about getting that one. It’s been a journey, this year and the first one, and I definitely feel a lot of confidence throughout the game. To do it with this team and on Drew’s special night, it was special.

On his bond with Doughty, and sharing a special night with milestones
Yeah, definitely. I don’t want to take anything away from his 1,000th game, it’s an unbelievable achievement, he’s a Hall of Famer, a great player. Just being able to share that moment with him is something I’ll never forget the rest of my life. It’s a moment we can share forever.

On his growth this season and confidence at the NHL level
Yeah, I think so. Just playing as many games as I could last year in pro hockey and then I had a couple of [NHL] games last year to get that taste. I just wanted to develop in the summer and I knew I could play at this level and as you noted too, just a little bit more comfortable as the games go along. I just want to keep that going, can’t take any days off here and whatever opportunity I get, make something of it.

On his relationship with Doughty and learning from him
He’s been a great leader to all the young guys and a leader to the team as well. He really carries us on the back end and he plays a lot of minutes and plays every day as hard as he can. He’s a competitive guy and he makes you want to do more out there. It’s exciting to share that with him.

Todd McLellan
On getting the two points for Drew tonight on his 1,000th game
I think when an individual has a special night, it will always be remembered, but the icing on the cake is the win. You feel good about participating and good for him, he deserves it, from his teammates and the organization, he’s played hard right until the end. Now, when they’re having a beer in the summer, or ten years from now, they’ll talk about this game and remember it was a win and everybody had a little piece in it. Good for Drew and good for the team.

On the special touches done for Doughty tonight
That’s the sign of a team. There’s unity, it goes as deep as the trainers, the training staff, thinking about the special occasions and coming up with thoughts and ideas. Management supporting wearing ballcaps in warmups, that doesn’t happen everywhere. The players participating and having fun with it, it’s always easier to do when you’re having some success and if you’re not winning as much, it’s miserable, but it can be something that can change your season. In our case, it was a nice reward for Drew and the guys had fun with it.

On Doughty and Byfield hitting milestones on the same night.
Yeah, the young and the old I guess, I don’t think Drew would like that word, and he isn’t old by any means, he has a lot of hockey left. Again, the transformation, year after year after year, guys continuing their careers, moving on, eventually mother nature says it’s time to go off to pasture and those kids take over the game. I wonder where we’ll all be when Quinton plays his thousandth game. He’s got a long road ahead of him, and a lot of things have to go well for him and for people around him to get there, but if he does a lot of the things that Drew has done, such as train, away from the rink, learn the game and figure out how to win, 985 games from now whoever is talking about him can share the story about that.

On Cal Petersen’s play as of late
Since we got back…Cal’s season didn’t start the way he wanted it to, or us. He dug in and committed to working on his game and then it was stunted by Christmas break and a positive COVID test that kept him away from the rink for a little while and that was when Jonathan was playing really strong. He was able to get us through a tough time and now we sense we have balance between the two of them. They’re a good tandem, they work well together, well coached by Billy [Ranford]. A lot of positives there.

On building, game to game, on this trip
I think our team does a good job of staying in the moment. This was the most important game of the trip, until now. The most important game of the trip is the next one. We’ve had to win different ways, but the common denominator is checking, we’ve been able to check our way to wins. Patience, within the game, waiting for opportunities and that will have to continue on. We’re going to play some teams that are playing quite well, and are desperate. When you’re on the road for two weeks, that’s a long time, but you put some wins together, I think you can enjoy the trip a bit at least.

– Defenseman Drew Doughty reached the 1,000 game milestone this evening in New York. Doughty became the 359th player in NHL history to skate in 1,000 career regular-season games and the fifth player to play 1,000 with the Kings.
– Forward Quinton Byfield scored his first career NHL goal late in the first period, as he became the second King this season (Sean Durzi) to get his first career NHL goal
– Forward Andreas Athanasiou had a multi-point night (1-1-2) in his first game back from injury, including a goal late in the second period.
– Forward Dustin Brown also had a multi-point game (0-2-2), his fourth multi-point effort of the season.
– Forward Anze Kopitar became the first Kings played this season to reach 25 assists, as he tallied the primary helper on Kempe’s late, empty-net goal.
– Goaltender Cal Petersen has won five of his last six starts, extended tonight with a 23-save effort

The Kings are scheduled to practice tomorrow in Philadelphia, with practice set for noon Eastern time.