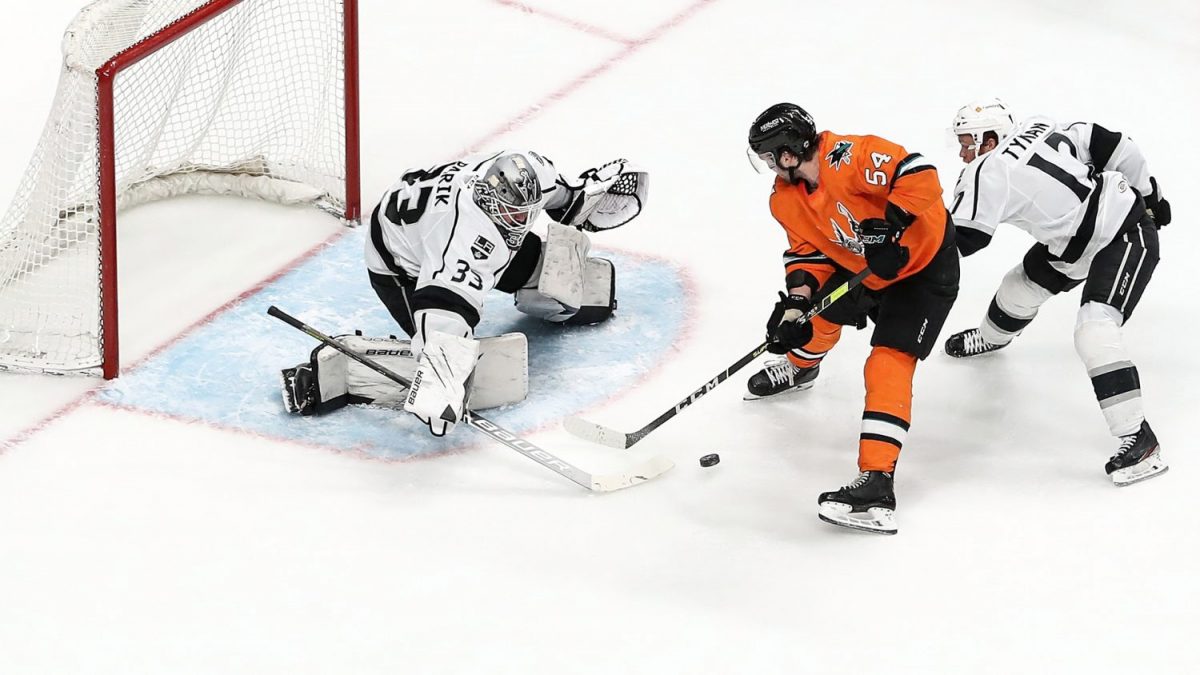 Behind 39 saves from goaltender Lukas Parik, the Ontario Reign (21-6-3-2) defeated the San Jose Barracuda (14-20-1-0) by a final score of 4-1 on Wednesday morning at the SAP Center. The Reign got goals from four different scorers and improved to 7-0-1-1 in their last nine games during the month of January.

Forward TJ Tynan led the way on offense with a goal and an assist, while defenseman Marcus Phillips opened the scoring with his first tally of the season and blueliner Jordan Spence extended his lengthy point streak to nine games in the victory.

Despite the early game time, both teams came to play in the first period, with Ontario taking advantage from the start. Just 2:12 into the opening frame, Phillips gave the Reign a 1-0 lead with his first goal of the season on a shot from the left point.

After an equalizer by Patrick Holway two minutes later, Ontario got back in front on a power play strike by Gabriel Vilardi at 7:12. He was set up for his eighth goal of the season with a feed from Tynan, who recorded his 40th point of the 2021-22 season and his AHL leading 34th assist. A second helper on the play went to Spence, his 12th total point during his recent hot stretch.

San Jose controlled much of the second period, putting 19 shots at the Reign goal. But Parik stopped each chance to keep Ontario in front by a goal going into the third.

Wagner extended the Reign lead to 3-1 with his seventh goal of the season from Christian Wolanin at 13:24 of the third. The speedy winger got behind the Barracuda defense and moved in on goal, using a move to his backhand before slipping the puck underneath San Jose goaltender Sam Harvey.

Ontario limited changes against in the final minutes until Tynan sealed the win with an empty-net goal, his seventh strike of the season.

The Reign won the special teams battle, going 1-for-2 on the power play while turning away both chances San Jose had on the man-advantage. Harvey turned aside 28 shots in a losing effort for the Barracuda.

Chris Hajt
On how much an early goal helped in a game with a morning start
Well we wanted to start on time, it’s definitely different having a game so early in the morning. I think it helped us with yesterday before we took our flight up here we practiced at 9 a.m. and I think that helped us being able to start on time. It was nice to get the first goal and go from there.

On the play of Marcus Phillips, who scored his first goal of the season
Really nice goal, walked the line. Nice wrister to the net and nice to see him get rewarded and had a solid game this morning so good for him.

On the play of Lukas Parik in the second period and throughout the game
He made the big saves when we needed him to. They had 19 shots in the second period and we were on our heels, they had nine or 10 scoring chances to our three or four so not a period that we wanted as a team but that’s what he’s here for. Making sure he’s cleaning up some of our messes and no different than any of the other goalies but happy for him, he played some good hockey and helped us get a win today.

On his team winning the special teams battle
Special teams is huge. 5-on-5 we have some things we’ve got to clean up and it was nice to see the penalty kill have some big kills and obviously Lukas was a part of that and we had some good clears, good structure and blocked shots. So that is important and our power play, we’ve been talking a lot about it lately and it scores on the first opportunity, beautiful goal with Gabe’s shot on a great pass by Tynan and it’s a huge part of the game.

Austin Wagner
On the team’s start in the first period
We came out strong. I think the fellas mentality in the room was just to get the first five minutes out of the way and get our legs under us. It’s a different circumstance with the 10 a.m. game today but we worked hard and it paid off for us. I think there’s some things we can fine tune for tomorrow but we’ll get together as a team and reestablish our game and be ready to go tomorrow.

On his insurance goal in the third period to extend the lead
It was kind of a weird play. The puck kind of bounced over Wolanin’s stick in the end there and kind of a scramble play but he made a great pass up to me and I think lately my mentality has been getting back to just driving to the net and if I have nothing at least I can go around the net or create some space for myself and my linemates. I was just trying to do that but I was fortunate to get it on net and just try to make the goalie open up and slide it five-hole but it was a great play by Wolanin and our whole line, I thought we had a really good game as a line and we were taking care of our end so I think we earned that goal.

On the team’s defensive play, allowing just one goal
In the game there’s always ups and downs and we know that as a team and we’re learning that. I think for our team we need to get more comfortable in the tight game situations because when we make playoffs that’s what a lot of it is going to be. We see that in the games we play Stockton they’re not always shootouts. We’re getting comfortable with it, we’re growing as a team and as individuals and we’ve been working on it so it was good to see us manage the game at the end there, put some pucks in, get it out of our zone and tighten it up and we were good but we’re definitely learning and we’re getting better at it every game.