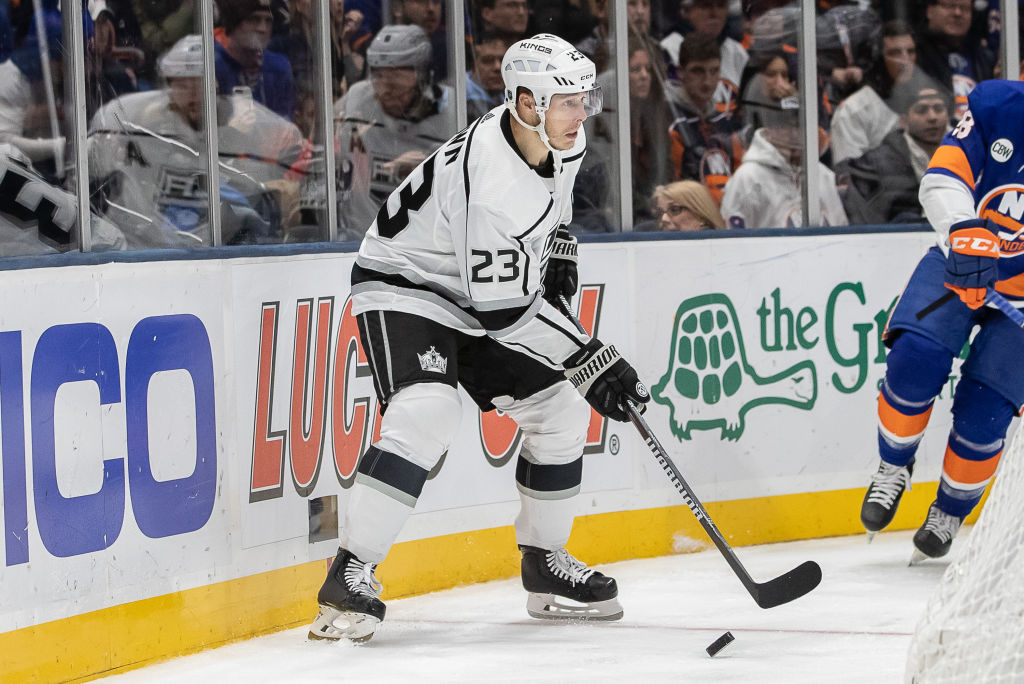 Back in action, Insiders!

Following an off day for the group yesterday in New York City, the Kings traveled to Long Island this afternoon to practice at UBS Arena, in advance of tomorrow evening’s showdown against the Islanders.

In case you missed it, the group on Long Island looked a bit different than what we saw during the most recent practice, which was morning skate in New Jersey on Sunday.

The Kings assigned four players to the AHL’s Ontario Reign – goaltender Matthew Villalta, defenseman Christian Wolanin and forwards Samuel Fagemo and Alex Turcotte. The Reign returned to action this morning in San Jose with a 4-1 victory to begin a back-to-back set against the Barracuda. The latter three played, while Villalta was the backup goaltender. The Kings also recalled goaltender Jacob Ingham and defenseman Jacob Moverare from AHL-Ontario, with both players on the ice with the big club this afternoon.

The moves get the group assigned to Ontario back on the ice for game action. The Kings traveled with extra bodies, considering the length of the trip, the distance from home and the pair of afternoon games coming up this weekend. The schedule necessitated extra individuals traveling, though with the lineup now becoming clearer and healthier, there was no need to have healthy prospects not playing. Hence yesterday’s moves.

With that now behind us, here’s how the Kings lined up today on Long Island –

The Kings now have 14 forwards at their disposal, with the top six skating as it usually would and the bottom six rotating groups of four on each of those lines. Athanasiou and Kupari were those who sat out against the Rangers, though both are options tomorrow evening.

Looking at where the Kings stand, coming off of the game in New York, the internal sentiment was that while no one is satisfied with one point, the way the Kings played against the Rangers was the way they want to play the game.

Speaking with Todd McLellan and Dustin Brown today, both felt that the game at Madison Square Garden was an example of a night when the Kings played well, but didn’t come away with a win. Brown feels that the Kings have done a better job this season of being in games and finding more points from not only like Monday night, but also games where they don’t have their best efforts.

“I thought we played really well that game,” Brown said of Monday in New York. In the third period we maybe sat back a little bit too much, but there’s been a few games that have come to mind, it’s kind of the progression of a team. You have to learn to win the games when you have your ‘B’ game but you find a way to make it interesting. I think this team is starting to figure that out.”

Both Brown and McLellan spoke today about what improved consistency means to them and I thought that both game well thought out, intelligent answers. Consistency relates to direct improvements this season, but also in the bigger picture. Those quotes are shared below –

Dustin Brown
Broadly, our consistency is much better. Even games we’re losing, we’re playing much better hockey, that’s probably the biggest difference for me as a group is the consistency, day in and day out. We haven’t had too many of those games where we’re completely out of it and that goes a long way in collecting points that you wouldn’t otherwise get, that allows you to stay in the playoff picture and keep climbing. I think we’re more balanced this year, different personnel, brought in a few different guys. Even with the injuries, with Eddy and Walks being out, we’ve been able to slot guys in and keep rolling. That’s a sign of better depth this year, whereas last year, injuries, or years past injuries or lack of depth [have cost us].

Todd McLellan
I think it is yeah, I think Dustin is quite accurate when it comes to that. It does take a good chunk of time to tear down a team, to collect the prospects, make deals to bring the players in. While we’re doing all of that, we have a new staff that’s trying to institute a new way of playing. For old dogs, new tricks aren’t easy and a lot of them have now fully bought in and do understand how we want to play and more importantly why we want to play that way. As a result, I think we’ve seen consistent improvement. There’s nights when we don’t have it, just like anybody else in the league. There’s nights when we beat ourselves, through some errors that are pretty preventable and then there’s nights, like the Rangers night, where I thought we played a really good game and we just came out on the wrong end. I do think we’ve improved as a team, not only this year but from the day we started. There was a lot of work that needed to be done – still a lot left – but we’re going in the right direction.

Quick Hitters –
– If my math is correct, UBS Arena will be the 45th different venue that Dustin Brown will play a regular-season game in. Brown will have skated in all 32 current venues, seven former, permanent NHL buildings, three European arenas and three outdoor venues for regular-season action. Three of those arenas have been strictly against the Islanders, with UBS Arena following Barclays Center and the Nassau Coliseum.

For Brown, it’s just another barn, similar to visiting Seattle earlier this month. Cool to see, cool to play in, but just another day here.

“Just another building. I’d be interested to see how many it is, if you count preseason, I’ve played in some different barns,” he said with a laugh.

UBS Arena is located directly next door to Belmont Park, home of the usual third leg of the Triple Crown. Racehorse California Chrome brought victories from the first two legs into Belmont Park back in 2014, but finished tied for a distant fourth in the Belmont. For a Kings team wearing the shiny helmets into action tomorrow, here’s to hoping for a better result in Belmont for California Chrome!

– While currently outside of the playoff picture here in early-2022, the Islanders still post a significant challenge for the Kings here tomorrow evening. This is a team that is less than a calendar year removed from the Eastern Conference Finals, when they gave the Tampa Bay Lightning just about all it could handle in a back-and-forth, seven-game series, which ended in a 1-0 defeat for the Islanders in Game 7.

No team has played fewer than the Islanders’ 35 games so far this season. New York began the season with 13 consecutive games away from home, as it awaited the completion of its new arena here at Belmont Park. Following a losing streak that spanned from November 7 – December 6, the Islanders have righted the ship, playing 10-4-1 hockey since, including seven wins from their last nine games played.

“The first thing that we have to expect is a well-prepared team,” McLellan said. “Trotzy and his staff do a god job on a nightly basis, not only to have their team ready but they also adjust to the opponents’ game. They’re going to play real well, they’re a tight-checking team, there’s nothing for free against them and you have to earn everything you get. If you’re lazy and casual going the other way, and they get up by 2 or 3, they can shut a game down instantly. Obviously, the start is important for us, as it is every night, but in particular playing with a lead against this team would do us a favor.”

– In a future focus, how about the tear that defenseman Brandt Clarke is on in the OHL? Clarke has ten points (2-8-10) from the eight games following the holiday break and leads all defensemen this season with 35 points (7-28-35) from 29 games played.

Clarke’s 28 assists are also the most in the OHL by a defenseman so far this season, while he ranks in the league’s Top 5 in power-play goals, power-play assists and power-play points and the Top 10 in goals, shots on goal and plus/minus. Clarke’s statistics have been staggering so far this season, all while captaining the Barrie Colts for the first time, after he was awarded the “C” back in November.

Clarke’s Barrie Colts currently rank third in the Central Division in points, and second in points percentage, with a 19-9-3 record so far this season. A strong return to the OHL for Clarke, who signed his entry-level contract with the Kings back in August.

The Kings are set to take on the Islanders tomorrow evening at 4 PM Pacific, Insiders, with tomorrow’s game an ESPN+ / Hulu contest. Drew Doughty sits at 999 games at this time, with every intention of make that 1,000 tomorrow. More to follow on Doughty, as he approaches another incredible milestone.