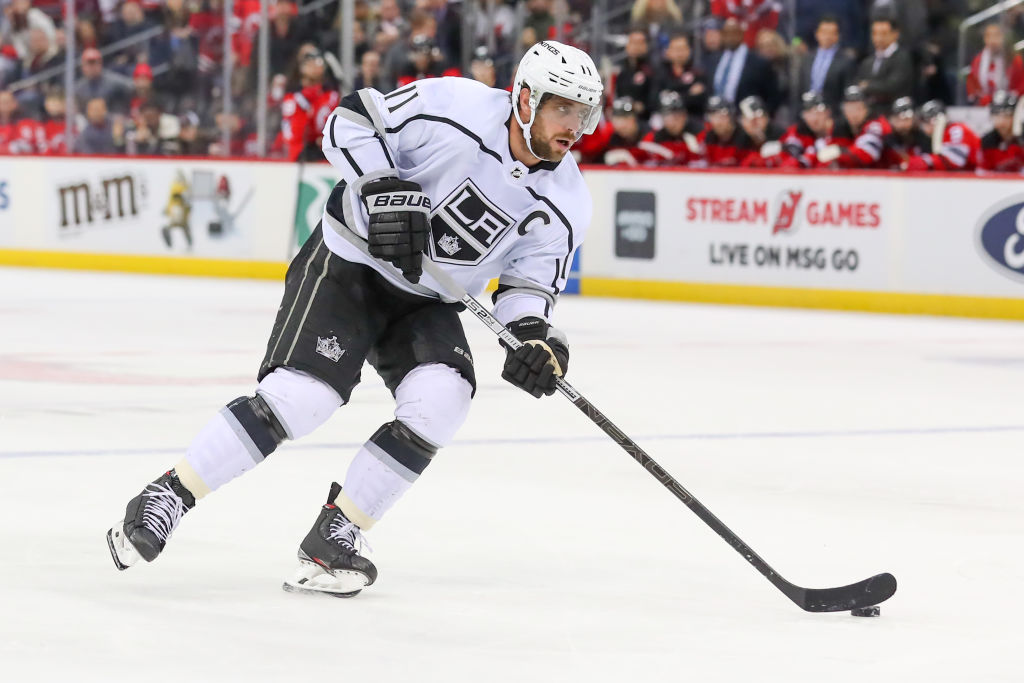 After yesterday’s travel day across the country, the Kings were back on the ice this morning in Newark, at the practice home of the New Jersey Devils. Conveniently enough, the practice rink and the game rink share a roof here in New Jersey, with the Kings on the practice sheet today. We are now on Day 2 of a 13-Day trip away from home, consisting of six games against six different opponents, which will take us into the NHL’s All-Star Break in early-February.

The Kings traveled with a larger than usual group on this trip, utilizing the league’s taxi squad in case of emergency. Being just under 3,000 miles away from home, having extra bodies in case of injury or COVID emergency is a good thing for the Kings. Never bad to have a “just in case” plan in place.

“Were gone for 12, 13 days out East and we have the luxury of the taxi squad,” Todd McLellan said this morning. “For the first time this year, we’re basically maxing it out or getting really close to it. We play two afternoon games, it’s impossible to get anybody here to help the team out. The COVID testing continues until we get home, so we are preparing for the worst and hopefully we don’t have to deal with it.”

With that in mind, here’s how the Kings aligned today in New Jersey –

Not yet with the group is forward Adrian Kempe, who is still in COVID Protocol as of this writing. The thing when it comes to protocol is that everyone’s timeline is different. There are minimums that need to be met, but from that point on, it’s dependent on each individual’s situation. With Kempe, that’s where we’re at right now. He’s expected back with the team on this trip, but exactly when he’ll return to action is still a moving target.

On Andreas Athanasiou, he did travel with the team, and practice with the team, which is a good thing. He skated on the team’s “fifth” line during today’s practice, signaling he might not yet be ready to roll. McLellan has called him “close” over the past few days, so we know he’s almost there, with the expectation he is ready to play on this trip.

Ice Intensity
Coming off of yesterday’s day off, this afternoon marked an intense practice for the Kings.

There are two elements to dissect there. One, the team did not skate yesterday and traveled nearly 3,000 miles from Los Angeles to the greater New York area. Coming off of a day like that, typically the team does have a more intense skate to make sure everyone has their legs going again.

“I thought practice was good, we usually get those after long travel and a day off,” Anze Kopitar said today. “Obviously, there’s some stuff we need to clean up that hasn’t worked over the last few games. I thought, all in all, it was a good day.”

“We needed an intense one after a travel day and coming off of three tough games,” Lizotte said. “I honestly haven’t thought we’ve played that bad, it’s just cleaning up details. We’ve outshot teams by 10, 15 plus shots, but when we do give up chances, they’re Grade-A and it’s a good league, players score on those. Tightening up those details is big for us and I think today’s practice was a good battle level for us.”

Those details are what has captured the attention of Head Coach Todd McLellan as well.

McLellan has discussed those details over the course of the three-game losing streak. The Kings lost the net-front battle in San Jose and were upset with certain moments in the defensive zone, which led to goals conceded against Tampa Bay. The team, overall, didn’t feel they played all that poorly against Colorado, but a loss is a loss and there were details to be corrected with three in a row.

With now a couple of days in between games, Todd McLellan saw a need to focus on those details today, with a combination of intensity following a day off, and getting the team’s attention on a three-game losing streak.

“There was a bit of both,” McLellan said. “As a staff, you get a feel for your team when they arrive at the rink and I thought they were quite loose this morning. We needed to understand why we were losing games, why we gave up 16 goals, we addressed that, then we had a workmanlike practice today. We’ve talked about the differences in practices, one being a clean out, get your legs going, that wasn’t today. Today was all details and they had to be reminded of what their jobs were.”

PK Problems -> PK Progress
It’s no secret that the Kings have struggled on the penalty kill. I’ve seen a lot of questions about “fixing it”. How do you do it, what needs to change, what areas need to improve.

I can assure you that the Kings are working on their special teams just about every day during practice. Today was no different, with a longer stretch devoted to special teams, both PP and PK. The benefit to those drills is that you can focus on both areas at the same time, and the Kings dedicated a large portion of today’s practice towards getting that back on track.

“Our special teams, as I said, we’re going nowhere unless they get better,” McLellan said this morning. “That would be our biggest focus moving forward.”

Speaking with Kopitar, it’s been about the details on the penalty kill that have held the team back in recent stretches. For the captain, a lot of that comes down to confidence, which is the “can’t measure” factor when it comes to the PP and the PK.

When teams are confident, special teams can flow much smoother. You’re making the right passes and the right plays smoothly and with ease. You’re getting the clears at the right time, putting the puck in the right areas to relieve pressure, and it’s all done effortlessly. When you’re not as confident, those things are more of a struggle, and the details just aren’t at the place they need to be. Right now, with the Kings towards the bottom of the league on the PK, those clears aren’t coming, which gives teams additional opportunities to score. Frequently, those opportunities wind up in the back of the LA net.

“It’s details,” Kopitar said today. “I think a big part of special teams, and you can’t see it anywhere on paper, is confidence. Sometimes, on the PK, when you give up a few goals you aren’t obviously as confident, not as aggressive, you’re not doing the things you would normally do with a little bit more ease and a little bit more patience.”

With another practice focusing in on those details, the Kings will see how it translates, with a difficult trip ahead of them. Chance #1 comes tomorrow against New Jersey.

Halfway Thoughts
Lastly, Todd McLellan weighed in on his assessments of the team at the 41-game mark of the season. We covered the halfway home narrative yesterday here on LAKI, while McLellan talked a bit about it before the Colorado game, which was number 41.

“Our game, when we play our game – and there’s 31 other teams that are saying it – but when we consistently play our game, we’re a hard team to play against. I believe that, but I think the opposition also believes it. When we don’t, we’re a fairly easy team to play against. We can’t win a lot of different ways, we have to play a certain way, commit to it, and everybody’s responsible for their piece of the puzzle. There are some teams that can rely on five or six guys to get it done, we can’t do that, we need 20 every night. Our special teams, as I said, we’re going nowhere unless they get better. That would be our biggest focus moving forward.”

The Kings are slated to return to the ice tomorrow morning in Newark, for morning skate before taking on the Devils later that evening. The six-game roadtrip begins tomorrow evening against the Devils, 7 PM local, 4 PM Pacific.