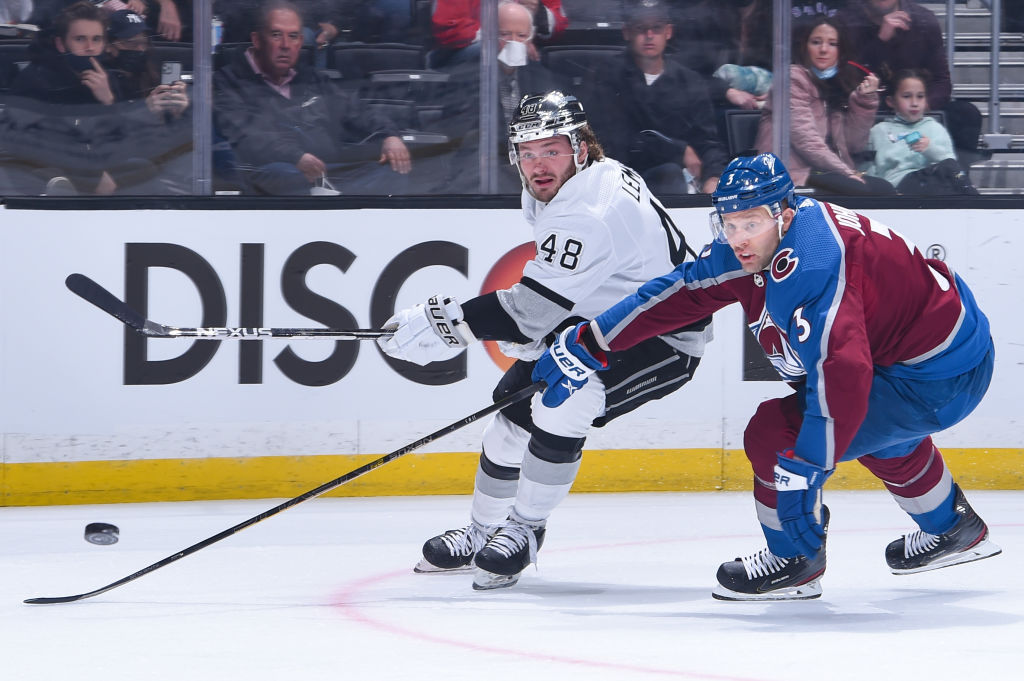 The Kings fell for the third straight game, following a 4-1 defeat against the Colorado Avalanche on home ice in Los Angeles.

Forward Anze Kopitar scored for the Kings in defeat, while Jonathan Quick made 23 saves in net.

Colorado opened the scoring this evening with a power-play goal midway through the first period. On the game’s first man advantage, Avalanche forward Nathan MacKinnon got a shot through from the center point, with forward Mikko Rantanen getting a deflection in tight for his 21st goal of the season.

The Avalanche made it 2-0 early in the middle stanza, as forward Kiefer Sherwood socred his first goal of the season. After the Avalanche forced a turnover deep in the offensive zone, Sherwood turned and fired a quick shot past Quick, from the right-hand circle, to double the visitors’ advantage.

The Kings converted on a mid-period man advantage to cut the deficit in half heading into the second intermission. After some solid puck movement in the offensive zone, Anze Kopitar converted from close range, knocking home a loose puck inside the crease to bring his team back to within a goal, his 13th tally of the season.

Despite the shot on goal advantage favoring the Kings through the first 40 minutes, an early third-period goal seemed to really put the game out of reach. Immediately after a Kings power play had expired, a blocked shot sent Nicolas Aube-Kubel the other way on a breakaway, with the Colorado forward slotting home to make it a 3-1 game. Defenseman Devon Toews iced the game late with an empty-net goal, his eighth of the season.

On his comfort level tonight compared to his NHL debut late last season
I think I was definitely a lot more comfortable. I think last year, it was still my first pro year and it was kind of weird playing with all the people you grew up watching and playing against all those guys. Now, I’ve just got to fit in, I know I can play with them and contribute a little bit. I just felt more comfortable.

On if his play tonight gave him a feeling that he belongs as an NHL player
Yeah, I think so. I had some chances, just got to bury those next time. I feel like my line had quite a bit of offensive-zone time tonight and I think we were building a lot of energy for our team.

On his line with Brown and Grundstrom
I really liked playing with them. Brownie, he’s played numerous game in this league, obviously he’s a great leader, he led the team to two cups, he’s a great player to play with and learn from. Being able to be out there on the ice with him, he definitely controls the faceoffs, makes sure I know what’s happening out there, he’s a good leader. Grundy is always working super hard, he was driving a lot of pace as well.

On matching up with a team like Colorado in his season debut
They definitely have a really solid team over there, they have a lot of speed and pace that they play with. For a good part of the game, I thought we had a pretty good game, we were driving the play as well and I think it shows that we can play with those guys. I think if we can bear down on some chances, a little more game management, I think the score’s a little different next time.

On his process of working through this year
Definitely a lot of ups and downs this year. Coming into LA, dev camp, rookie tournament, preseason, definitely super exciting to get back with the team and hopefully make the lineup. Getting hurt in the preseason was definitely a setback, wasn’t a great feeling, being out of hockey for two and a half, three months, it’s not a good feeling, so I was excited to get back. I’ve still got a lot of career ahead of me, there’s definitely the breaks you have to go through.

On if tonight’s loss is about eliminating mistakes and game management
That and a little bit of finish too. When you talk about mistakes, usually they’re in your net and yeah we made a couple, but the difference right now is that team over there capitalizes on them and it takes us an extra four or five chances to capitalize. We’re working towards that. We can’t ask our players to play perfect. The defensive part of it, yeah, mistakes we have to clean some of that up, the offensive part, we have to score more goals. It was not for lack of effort or chances, it’s just got to go in.

On not capitalizing more during a strong second period
The second period for me was the period, we had a good period. We had a team that played last night, they were tired, tried to slow down the line changes, not playing all of their D as much as they would have liked and we just didn’t finish at that point. The break between the second and third, it certainly didn’t help us, it helped them. They regrouped and then the third goal really took a lot out of us because it was at the backend of the power play. Everybody is yelling and screaming, yet we didn’t have cover, maybe we didn’t make the best puck decision either.

On his impressions of Quinton Byfield tonight
Quinton, I thought he was quite good. We talked as a group about the explosiveness of his legs, the timing, the comfort with the puck. He showed all of those things today, a lot more than he did last year when he came up in those games. His summer work, despite the injury, was valuable, and then his time he put back to getting his game back in the American League was good. One, real good night so far and we hope that will continue.

On where he believes the Kings stack up against a team like Colorado
We played with them, I think this was a real game. Last year, at the end of the year, it wasn’t a real game when we played against them, but we didn’t have a lot of the pieces that we have right now. It was a competitive night, it was a hard night. I really believe we can play with any team in the league. We need some things to go right for us offensively, we explode for five or six and then all of a sudden we’re back down to the one or two. Two’s a bad number in the NHL, if you’re thinking about offense. Two’s a great number if you’re considering defense, but two [goals] doesn’t get you very much, three gets you a lot more.

On finding more offense in games like tonight
The finish has to come. A lot of pucks to the net, were we in the eyes, around the eyes, I think we were, there were a lot of scramble plays. Lemieux in the first period had a tremendous scoring opportunity, made a great move. Those have to go in a little bit more than they are right now, it’s one of the toughest things to coach, or to practice or to train, sometimes it’s just natural instincts. We played against Tampa the other night, the game was close, I think Iafallo pulled the puck and hit the post. Those are moments where the natural scorers are putting them in and the guys that are really good players, but maybe it just doesn’t come naturally are ringing them off the posts. We’ll keep working on it, we’re getting better.

– Anze Kopitar scored his 13th goal of the season and now has seven points (4-3-7) over the last six games. Kopitar leads the team with 36 points (13-23-36) this season.
– Alex Iafallo (0-1-1) has points in each of the last two games, and has amassed five points (1-4-5) over his last five games.
– Drew Doughty posted his 17th assist of the season, most among team defensemen, as he led the Kings with 27:38 in time on ice.
– Dustin Brown appeared in his 1,270th NHL game, surpassing Brett Hull for seventh on the all-time games played list among Americans.
– Mikey Anderson appeared in his 100th career NHL game this evening.
– Forward Quinton Byfield logged 15 minutes this evening in his season debut, including 5:15 on the power play. Byfield tallied three shots on goal.

The Kings are not scheduled to practice tomorrow, with a team travel day to the East Coast. The team is set to resume skating on Saturday afternoon in New Jersey.