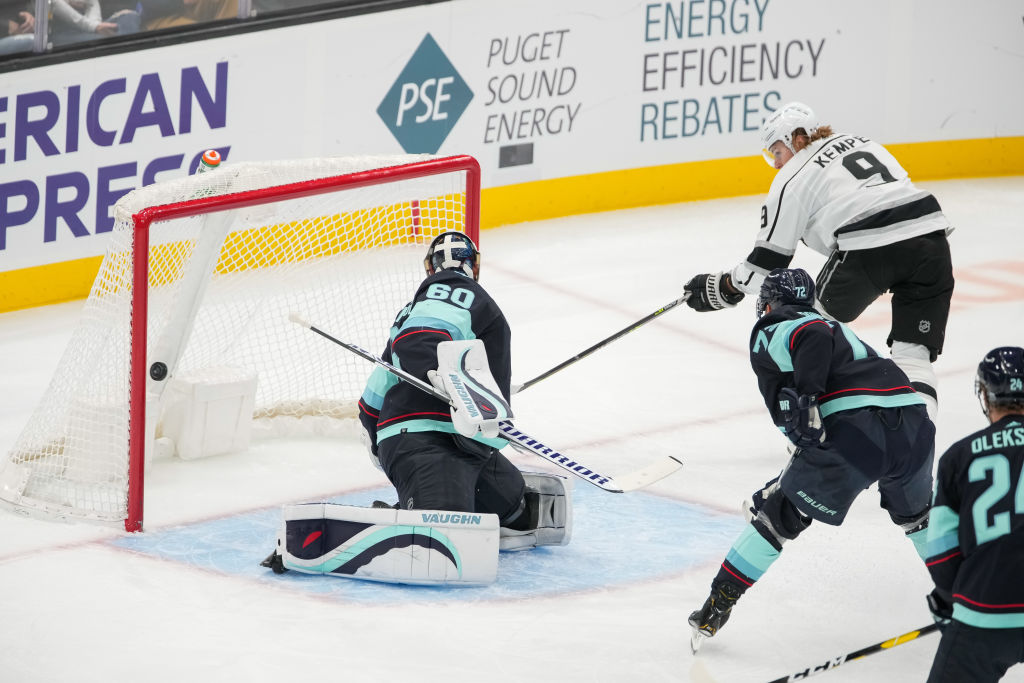 Today’s location – Seattle, Washington. The Kings opted on this trip to spend the evening in Seattle, following last night’s win over the Kraken. Pre-planned of course, not result dependent. The team then held practice this afternoon at Climate Pledge Arena and are currently on route to San Jose, in advance of tomorrow afternoon’s matinee game against the Sharks.

“It was practice ice availability and the San Jose airport situation, if you don’t get into San Jose by a certain time you have to land in Oakland and that would have added another hour to our trip,” Todd McLellan said earlier today. “We chose to practice here, something different, something new and fly right after the skate.”

Today’s skate saw largely the same alignment that we saw last night, but without Adrian Kempe, who was added into COVID Protocol earlier today. The Kings had established a bit of consistency in their lines, with the personnel at their disposal, though Kempe was a big part of that. Today’s rotations saw Samuel Fagemo skate in that spot, though Todd McLellan said that things could go in multiple different ways tomorrow afternoon in San Jose.

Here’s how the Kings lined up during today’s skate –

The Kings got Brendan Lemieux back in the lineup yesterday evening, as he returned from a non-COVID illness that kept him out of the lineup on Thursday evening against Pittsburgh. Lemieux took his usual spot alongside Blake Lizotte and Arthur Kaliyev.

Kempe’s absence naturally shakes things up, asking the Catch-22 of a question – Is it better to make a 1-for-1 swap, keeping three of four lines intact, but moving a player from a healthy scratch to the first line. Or, is it better to shuffle players up in the lineup, disrupting multiple lines in the process? We’ll see how the Kings opt to go tomorrow.

Identity Theft Is Not A Joke, Jim
We’ve talked a lot about identity this season. Looking for it, establishing it, believing in it and playing to it. Over the last six weeks, we’re starting to see what that means for the LA Kings. The Kings won seven consecutive games earlier this season, an obviously excellent stretch, but what has occurred lately has been perhaps more meaningful.

The Kings haven’t lost back-to-back games since November. They’ve posted an 11-5-1 record in that stretch of games and have currently won each of their last four games. Over that time, the Kings have identified an identity, so to speak. They know who they are and know how effectively they can play when they play to their identity.

Todd McLellan has spoken about the topic of identity several times throughout the course of the season. He’s talked about finding it early on, talked about establishing it as we’ve seen the kind of team the Kings can become and he’s talked more recently about playing to it, and finding success when the Kings do play to it.

It’s been exciting to watch that evolution and the last month and a half has been an impressive culmination of the team’s progression this season.

“When I addressed the media at the beginning of the year, I said that we were still trying to discover our way, commit to a certain way,” McLellan said. “I think over the last month, month and a half, we’ve made the commitment to play towards a certain identity. The group as a whole believes in it and when we play that way, we guarantee ourselves a chance. It doesn’t always give us a win, but when we wander from it or pretend we’re something we’re not, it’s a tough road to hoe and we’re often on the wrong end of it.”

Doughty summed it up perfectly.

“I think we’re hard to play against, we play fast, we’re more aggressive on the forecheck than we’ve been and then in our 1-3-1, it frustrates teams to get by us,” he explained. “You see star players on other teams get frustrated, yelling at us ‘what system are you playing’ and we just eat that up. We love frustrating other teams. I know from talking to other players after we play them, it’s a hard night every time they come to play the LA Kings, or we go to them. I think we’re frustrating to play against and I think that’s what our goal is.”

Hard team to play against. Play with pace. Still have the 1-3-1 as needed. Frustrate the opposition. We’ve seen a lot of those things as of late, with the hopes that there’s only more to come.

Close Em Out, Close Em Out
The Kings are finding ways to win games in different ways, and a lot of that stems from the team’s ability to close games out. At the beginning of the season, the Kings saw leads slip away on countless occasions.

Take the opening road trip for example. The Kings led during the third period in two of those four games, and finished that trip without a victory. The same could be said in November, with third-period leads against Arizona and Winnipeg slipping away. As of late, the Kings are finding a way to get the job done in those situations, whether it be grinding a way to get the two points, such as last night in Seattle, or expanding on that league like on Thursday against Pittsburgh.

“I think early in the season, if we had the lead going into the third period, we would kind of blow it,” Doughty said. “I think that as of late, we’ve learned how to play with the lead and either grow on it, or shut it right down. That’s something that, if you want to be a good team in the league, you have to get down. I think we’ve done a good job at it.”

In some ways, those losses have helped lead to the wins the Kings are earning right now.

It can take some time to learn how to close out and win games at this level. Doughty went through those lessons himself, with the Kings specializing in winning games that way when they were at their most successful peak during the Cup years. Now, as a veteran on a team that is working in a new wave of players, learning how to do that collectively has been a process for this Kings team.

A process, though, that is starting to reap the benefits.

“Since I’ve been in LA, us veteran guys know how to do it, we’ve dealt with it for a long time and it’s something the young guys needed to learn,” Doughty said. “You can’t just sit back and let the other team take it to you, you have to keep making plays without cheating and try and get the next goal. If you sit back, you’re just going to get dominated and scored on. I think the younger guys have learned that and as a team, we’re just doing such a better job, and it’s becoming a staple of ours, which is a really good thing.”

Seattle Memories
Lastly, hear from McLellan on his first trip to Seattle at the NHL level. Nothing but positives – including the result! – about this weekend’s time in Washington State.

“It was an enjoyable evening for everybody. First of all, change is nice for everybody, we didn’t know what we were coming to. The building here is tremendous, it’s different, so to discover a new locker room, the space, the facilities they have…the fans were outstanding, and then to win it tops it all off. It was a pretty unique night, I think they’re doing a tremendous job here in promoting their team, everywhere you look you see Kraken jerseys, hats or whatever it might be. It is a strongly followed team right now, at least from the eyeball test at a game.”

The Kings are currently on their way to San Jose, with the next stop Northern California, in advance of tomorrow’s game against the Sharks. We’re staring down a 1 PM puck drop from the Tank for an MLK Matinee!