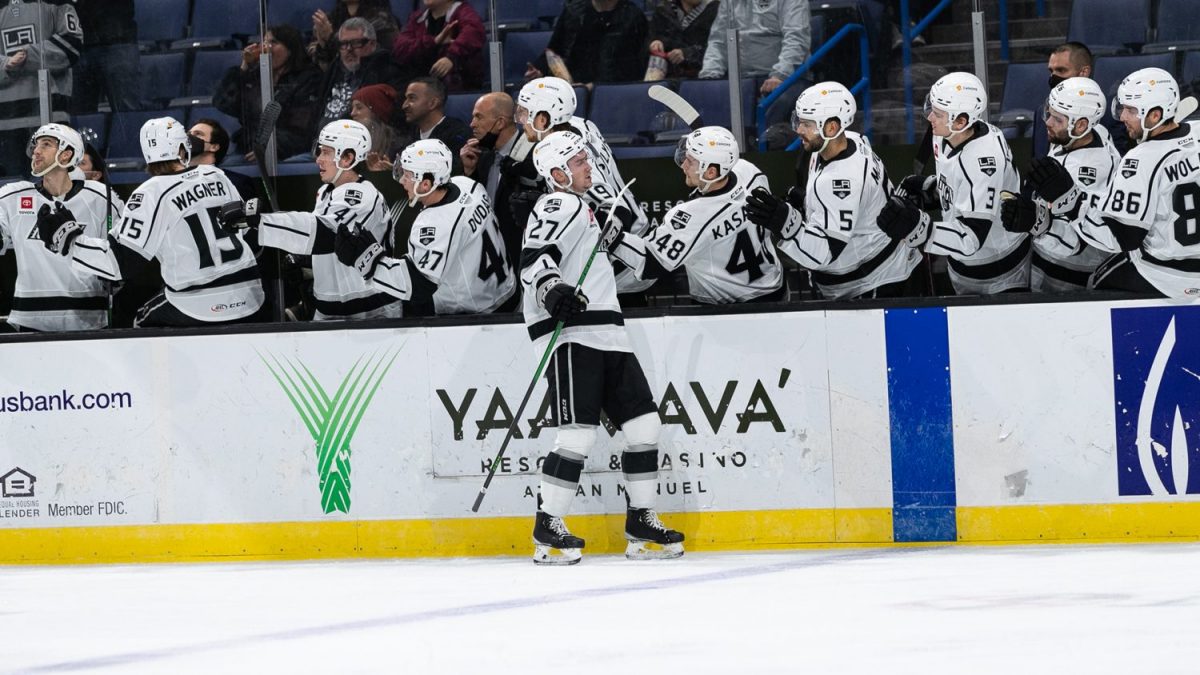 The Ontario Reign (17-6-3-1) used a complete team effort to earn a 5-2 win over the Henderson Silver Knights (16-9-2-1) in front of their home fans at Toyota Arena on Friday night. Forward TJ Tynan had two assists in the victory, while Christian Kasastul scored his first career AHL goal and Marcus McIvor notched the first AHL point while playing in his first game for the Reign.

Goaltender Matthew Villalta turned aside 25 shots to pick up his 11th win of the season in between the pipes. Ontario also got goals from Tyler Madden and Gabriel Vilardi on the power play, in addition to even-strength strikes by captain Brett Sutter and Aidan Dudas.

Ontario earned a 2-1 lead after 20 minutes with goals by Madden, who scored his 10th of the year on the power play at 4:12, and Kasastul, who is found the back of the net while playing forward for the first time.

The Reign extended their lead in the middle period when Sutter rifled a wrist shot past Henderson goaltender Jiri Patera after a turnover at the top of the offensive zone to make it 3-1. Then after both teams failed to score during 5-on-3 power play opportunities, Ontario found themselves back on the man-advantage and took a 4-1 lead when Vilardi one-timed home his seventh goal of the season from Tynan and defender Jordan Spence.

Dudas pushed the score to 5-1 at 11:16 of the third to put the game out of reach for the Silver Knights with his sixth tally of the 2021-22 campaign. After a feed by forward Brayden Burke, Dudas dangled around a defender before shoving the puck under Patera and into the net to finish off a highlight-reel move.

The Reign outshot Henderson 30-27 in the game and Patera finished with 25 stops in a losing effort. Ontario was 2-for-5 on the power play, while the Silver Knights scored a late man-advantage goal to end the game at 1-for-4.

The clubs will do battle once again on Saturday night in Nevada to wrap up a home-and-home weekend at the Orleans Arena beginning at 7 p.m.

Chris Hajt
Initial thoughts on his team’s play after the game
A great effort. Everyone who played tonight bought in. Matt Villalta was solid when he needed to be, but they played as a group. Every single guy was pulling the same way and it was nice to have that effort in our rink. We’ll get our rest and get on the bus and look forward to a similar effort tomorrow but we’ll definitely take the two points and the effort we had tonight.

On the importance of Sutter’s game and leadership as captain
Himself and our leadership group were there, leading the way. Brett is a heart and soul guy who has been here a long time who doesn’t surprise us with what he brings on a daily basis for our team and I can’t say enough good things about him. He obviously stepped up to the plate tonight, not just with a fight at the end and being there for teammates but just in general with his play. I’m excited for him and our leadership group to take another step today.

On the play of Villalta in his return to the net after missing time
He played very solid, made some big saves when we needed him to, continued to play the puck better as the game went on and we were able to against a pretty good forecheking team come out. They obviously still had some opportunities that Matt stood tall on and he looked very composed in the net and I’m happy that he had that effort.

Aidan Dudas
On the play of the team in tonight’s win
I think we had a really great team effort. When we’re down a guy, everyone’s got to come in and step in to a different and bigger role and I think everyone did that tonight.

On what he saw on his goal and if he knew what move he’d make
I saw Tynan on the far side and I think they respect him a lot so he kind of gave me a little bit of room to pull it in and luckily I finished it off.

On what it’s like to play with Tynan
He just makes everyone around him better. I could talk for an hour about how good he is and what he does for the team but I think that anyone that steps on the ice with him, he elevates everyone’s game and it was a treat tonight.