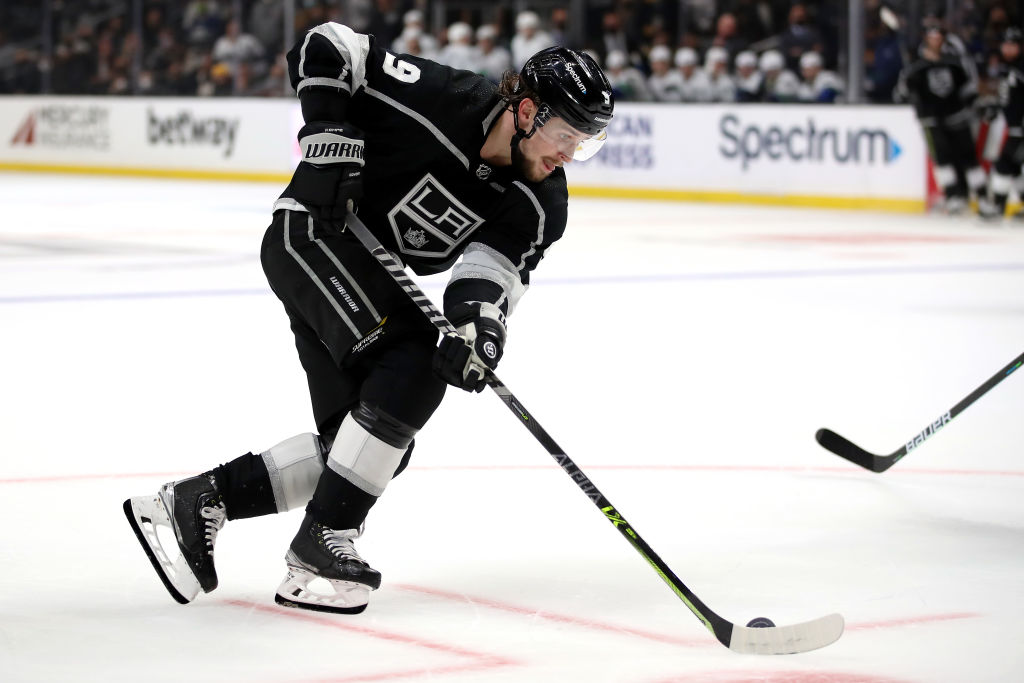 The Kings hit the ice today for a quick skate in advance of their flight to Seattle. Today’s practice wasn’t necessarily long but it was important as the Kings look to continue to build on what they accomplished, both last night and on a successful homestand, as they hit the road for a pair of divisional games over the next three days.

The Kings had a total of 15 forwards, eight defensemen and two goaltenders on the ice today, with the team gearing up with extra players as they hit the road for the first time since December 19. On that four-game trip, the Kings lost three players to COVID Protocol, one before each of the last three games. The league’s new rules involving taxi squads gives the organization the flexibility to travel with extra players here on this trip, which the Kings are taking advantage of.

The extra bodies are important to have, considering how easy of a situation the Kings have at home, with the AHL’s Ontario Reign operating right across the hall. Moving players up and down at home couldn’t be much easier. The situation gets a bit trickier when operating away from home. That the Kings chose to travel with a slightly beefed-up taxi squad, full of players with NHL experience to their name, is not surprising.

“We’re going on the road now, so it’s a lot more difficult than just walking across the hallway and saying hey, you’re coming up or down,” McLellan said. “We will take some extra bodies with us on the road, tap into the taxi squad. It’s a shorter trip, the big planning will be when we go for the six-gamer next week.”

The update from yesterday is that forward Brendan Lemieux rejoined the group today, after he missed last night’s game with a non-COVID illness. Samuel Fagemo stepped in for his NHL debut, as he made a solid impression in his first taste of NHL action. Lemieux will travel to Seattle with the team but is not a 100-percent lock to be ready to go for tomorrow’s game.

“Brendan is back, he was sick yesterday, non-COVID. I’m sure his energy level isn’t where it needs to be. We’ll see how he is tomorrow morning and if he will be in the lineup or not will depend on how well he feels.

How Now, You’re An All-Star
Yesterday’s news regarding Adrian Kempe representing the Kings at the NHL’s All-Star Weekend in Vegas was exciting, for both player, coach and team. Kempe’s recognition is well deserved for the season he’s currently having. Kempe has already tied his career-high in goals scored, providing a newfound consistency on a game-to-game basis, one that has come with age, maturity and experience.

Kempe was honored to be honored, if you will, as he addressed the media following today’s practice.

“Very excited, I didn’t really expect to be selected, with all of the players on our team and a lot of other players that could have been selected as well,” he said. “I’m very excited, it will be a good experience for me, just keep my confidence up.”

While he doesn’t know for sure, and won’t for a bit, Kempe assumes his skills competition will include the fastest skaters event, at least he feels that would be his best event to contribute in. He was joked with that he could probably participate in the accuracy shooting event as well, with how his shot has developed here this season.

Kempe’s goalscoring has been on another level this season, coming both more frequently and more consistently than it has in past seasons. It’s for those reasons, among others, that Kempe is a deserving selection in the eyes of his head coach.

“Anybody that gets picked deserves to be there, and [the media] talks more about the people that aren’t there than who is,” McLellan said. “That’s just how many dominant players are in the league. In Adrian’s case, he’s very deserving, in anybody’s eyes, including his teammates. There are others that we feel could be playing in that game as well, but just the way the game is set up, good players are left out. Adrian deserves to be there, absolutely.”

Calling With Confidence
We’ve talked about several reasons for Kempe’s uptick in goalscoring this season, but today brought up an interesting point, one of confidence coming with age. Kempe spoke on the subject specifically as it relates to the confidence to call for the puck with gusto, and effectiveness, especially when playing with elite players.

We hear it from Todd McLellan frequently when discussing younger players and how they need to give themselves permission to play their game. That concept applies double when it comes to say playing with Anze Kopitar on a line. It’s not as if Kopitar doesn’t want players to call for pucks – he without a doubt does – but it’s still human nature for many younger players coming in to avoid doing so, as to not make a mistake with the captain on the ice.

“Drew and Kopi, they always mention it before games, be loud out there,” Kempe said. “I remember they always told me to be loud, and that makes you more comfortable. As you gain experience throughout the years, you can definitely tell what a big difference it makes when you’re talking on the ice.”

Kempe said that he himself fell victim to that over the first couple of years of his career. As a young player, coming up playing with some good linemates, it took him some time to get comfortable doing it and doing it as often as it needed to be done.

While he knows that no two players are the same, he does feel that he’s been able to learn and evolve from the lessons he’s learned as he’s grown into more of an established veteran in this league.

“I can only speak for myself, but I feel like it’s pretty common, especially your first couple of years in the league,” he said. “You want to go out there and play as hard as you can, and maybe you aren’t calling for a puck as much then as you do after a couple of years. It’s hard to say, but you don’t want to screw something up. When I was younger, I didn’t want to call for it and [have] it get intercepted, I just wanted to keep it simple at the beginning. Once you get more confident, you get more experienced, you feel more comfortable.”

The irony of it is, Kempe recognizes in hindsight how getting to that place sooner would have only helped his contributions to the Kings at the time. Now, playing on the first line on a more permanent basis, Kempe is excited to be in a place of comfort and confidence, without any hesitation to make the calls that are needed.

“Talking helps, it makes a big difference,” he added. “I feel like it should be common, because when I was younger and I was talking more, I probably would have helped the team even more. It’s something that comes with experience.”

Whatever it is, here’s to hoping he continues to do it.

McLellan Quotes
Lastly, McLellan spoke on several other topics today, with a few of those quotes included below on the Kings reducing turnovers in their game, the continued growth of internal competition and being down a few staff members due to COVID.

On reducing turnovers in certain situations, as a team
It’s all connected. We talked about passing the other day, we talked about breaking out clean, we talked about faceoffs, we did a great job in the faceoff circle last night so we have the puck more. You start with it, you hold onto it a little bit longer, fresh on line changes. You take shortcuts, you make more mistakes when you’re tired, I think we all know that, it’s just life in general. That’s been able to help us cut turnovers down, just managing situations too.

On internal competition continuing to grow with the Kings
I think competition is healthy in the organization, we’ve strived to get that back. We’ve been able to reward players for good games by keeping them in. We haven’t had any decisions to make, because of COVID and injuries, but as we start coming out of it, we’ll have some tough ones. I don’t think there’s anybody that wants to cross the hallway again, but [everyone who has played here] can stay. That speaks to the depth of the organization and the job we’ve done. Those decisions are coming and it’s up to the players to make them hard on the organization.

On being down several staff members as well due to COVID
It’s about the players, that’s why we’re here, but to get them to perform at a certain level, the countless hours that the equipment people, the training staff, they don’t go nameless in our locker room and they’re appreciated, in all NHL locker rooms. The everyday fan might not know that person standing on the bench, but they’re just as valuable as number 11, number 8 or 32. They make things happen for them, so they can be the best they can be.

The Kings are scheduled to skate again tomorrow in Seattle, at 11:30 from Climate Pledge Arena, in advance of the first game in franchise history against the Seattle Kraken. 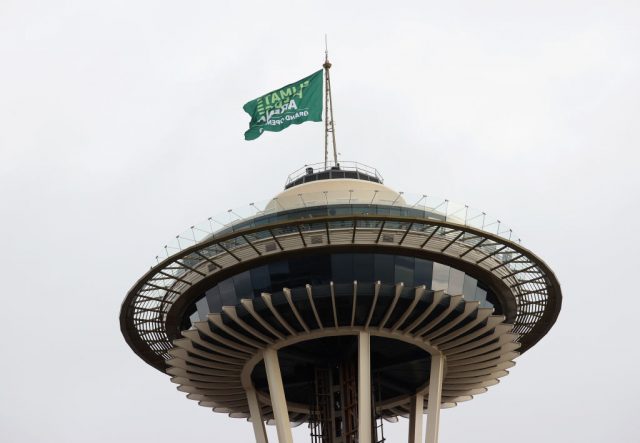 SEATTLE, WASHINGTON – OCTOBER 22: A flag for the new arena flies over the Space Needle during a ceremonial ribbon cutting prior to tomorrow’s opening night for the NHL’s newest hockey franchise at the Climate Pledge Arena on October 22, 2021 in Seattle, Washington. (Photo by Bruce Bennett/Getty Images)