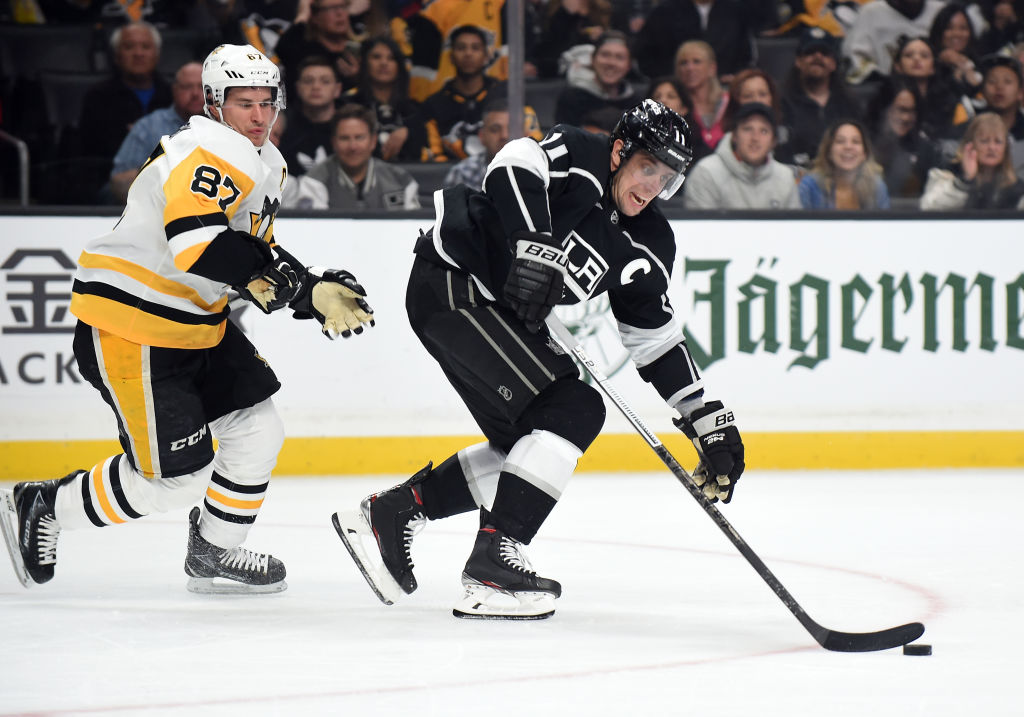 TONIGHT’S MATCHUP: The LA Kings see their seven-game homestand come to a close this evening as the Pittsburgh Penguins make their lone trip of the season to Los Angeles.

HEAD-TO-HEAD: The Kings and Penguins square off this evening for the first time since the 2019-20 season, when the Kings posted a 1-0-1 record that included a 2-1 victory on home ice. Blake Lizotte led all skaters with three points (1-2-3) from the two games played. Viktor Arvidsson has five goals from 10 games played against Nashville, his second-highest goals-per-game rate against opponents he’s faced at least 10 times. Defenseman Olli Maatta played 362 games for Pittsburgh from 2013-19.

KINGS VITALS: As we reach the end of the homestand, the Kings enter tonight’s action with a 4-2-0 record from the first six games, giving them eight points of a possible 12 thus far.

Goaltender Jonathan Quick is tonight’s expected starter between the pipes, following two straight from Cal Petersen. Quick brings a 4-4-5 record all-time versus Pittsburgh, along with a .907 save percentage and a 2.67 goals-against average.

The Kings made one roster move this morning, as defenseman Christian Wolanin was activated from COVID Protocol and assigned to the AHL’s Ontario Reign. With the Kings having just an optional skate today, Wolanin will practice with the AHL club and be evaluated after that. The Kings active roster now has 12 forwards, seven defensemen and two goaltenders, with forwards Martin Frk and Carl Grundstrom remaining in protocol and forwards Lias Andersson and Andreas Athanasiou still on injured reserve.

With an optional skate today, we’ll wait for the song on tonight’s lineup, but here’s how the Kings lined up on Monday against the Rangers –

Pittsburgh starting goaltender Tristan Jarry was off first this morning, making him tonight’s expected starter. Jarry has started each of the last four games for the Penguins and seven of the team’s last eight. The 26-year-old is in line for his third career start against the Kings, bringing with him a 1-1-0 record, a .906 save percentage and a 2.91 goals-against average.

Here’s how the Penguins lined up last time out, against Anaheim on Tuesday –

Pittsburgh welcomed back Evgeni Malkin for his first game of the season against the Ducks, as the Russian centerman collected three points (2-1-3) in his season debut. Malkin skated on a line with former King Jeff Carter, who is returning to play in LA for the first time since he was traded to the Penguins at last season’s trade deadline.

Anze Kopitar didn’t seem overly concerned this morning on which of Pittsburgh’s top two centermen he would square off against more frequently this evening. With Malkin’s return to the Kings lineup, Pittsburgh once again has the two-headed monster at the top of their lineup in 87 and 71.

The offseason addition of Phillip Danault, as mentioned several times this season, gives the Kings the firepower down the middle to feel confident in matching up against two lines on any given night. Teams like Pittsburgh that bring two, All-Star centermen to the ice no longer force the Kings to choose, because they now have two, comfortable options.

Those numbers are not indicative of how the Kings will deploy those individuals, however, considering tonight will be the first time Kopitar and Danault have faced the Kings together. Regardless of who faces off more frequently against who, Todd McLellan is thankful to have both as options in the fold.

“It does factor in, sometimes, you look at the pace of the player, the type of faceoff success, the size of the individual, how well the rest of the line is playing, how well the rest of our line is playing,” McLellan said. “It does go in, but to have the two of them, to be able to take on the task that they have on most nights, I can’t tell you how much of a difference that makes in comparison to past seasons.”

At home, the Kings will at least have their choice in many situations with last change, so we’ll see how they choose to matchup this evening.

Work Of Cart
Tonight’s game marks the return of forward Jeff Carter to Los Angeles. In a Kings jersey from 2012 to 2021, Carter played 580 games in the regular season and 73 games in the postseason and should expect a nice tribute and a nice ovation from the faithful at Crypto.com Arena this evening.

Alex Iafallo told us yesterday it will be nice to see Carter back on the ice, even if he won’t be flying his drone over to the Pittsburgh hotel in advance of the game.

Knowing Carter wasn’t able to get a game last season with the division-only schedule, he understands the moment here today. Though Carter spent the majority of the season with the Kings, he was a big part of the group here for several years, including all of Iafallo’s until the trade last season.

Anze Kopitar, a teammate of Carter’s for the majority of those 580 games, said that he seen him yet, with Pittsburgh practicing downtown yesterday. Kopitar knew that Carter would likely have a lot going on before the game, but said he’d definitely catch up after the game.

“It’ll be weird at first, I’m sure warmups are going to be a little bit weird, seeing him on the other side of the ice,” Kopitar said of Carter. “Once the game’s going to get going, it’ll be not forgotten, but you don’t think about it. We’ll reconvene after the game and talk a little bit, see what’s up.”

Speaking with Todd McLellan, he called Carter one of his favorites to coach.

He cited Carter’s presence within the locker room as someone who was “full of life” and helped the coaching staff to deliver the message of how the team wanted to play. It was obvious to McLellan, from when he got here, why Carter was a two-time champion, both on the ice as a player and off the ice as a person.

“Coaches do have favorites, there’s no doubt about it, and for different reasons, I would rate Carts up there as one of them,” McLellan said today. “I felt he was a really good team guy, I always felt like Jeff was an extension of what we were trying to sell. He wasn’t bucking it, he accepted his role and played it well. It was real obvious to me why he was a part of championship teams, just the way he carried himself, and all of the on-ice talent and skill. I’m happy for him that it’s worked out really well in Pittsburgh, and I hope he’s got however many years he wants to play left in him.”

Carter and the Penguins, his old teammates and the Kings, tonight at 7:30 PM!