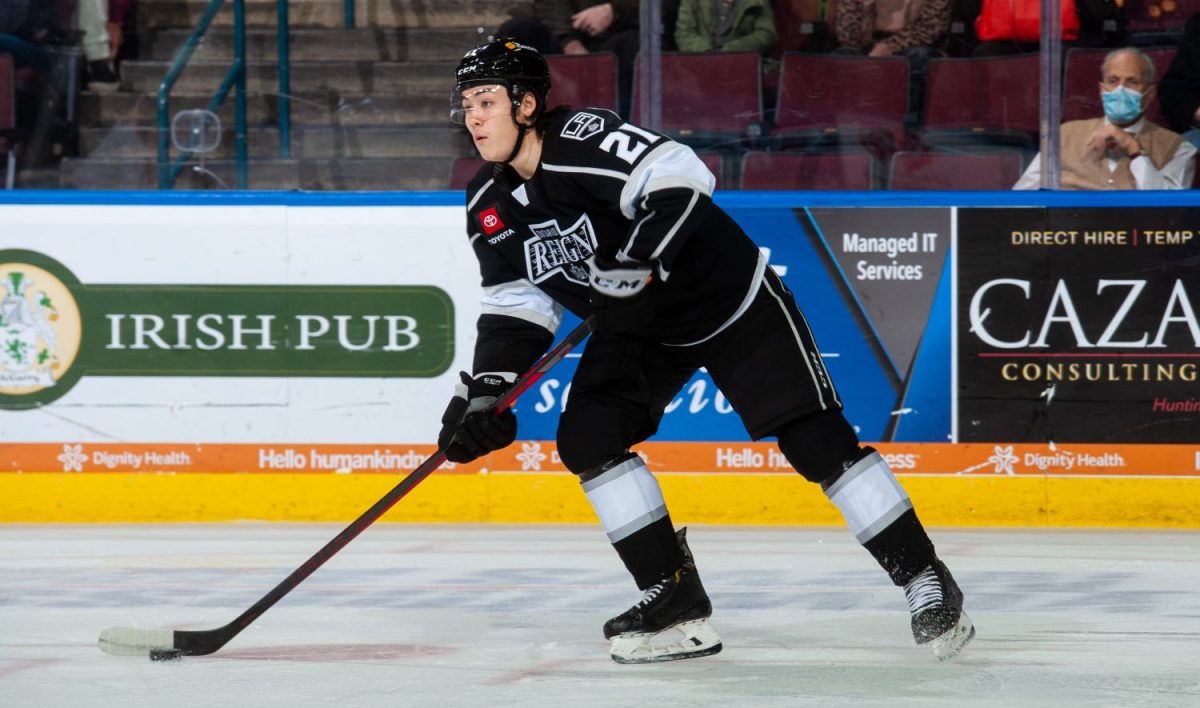 It hasn’t taken long for Jordan Spence to stand out in his first season of professional hockey. In just 23 games over a span of three months, the defender has gone from being a new addition to the Ontario Reign, who was eased into the lineup, to a staple on the team’s blueline with the trust of his coaching staff.

Spence has risen in the ranks of the LA Kings organization over the past few years after he was selected in the fourth round of the 2019 NHL Draft. The following season, he returned to the junior ranks with Moncton in the QMJHL and put up 52 points in 60 games with a +49 rating on his way to earning the league’s Defenseman of the Year award.

Then, in a 2020-21 campaign that was a challenge for everyone in the hockey world, Spence managed 40 points in 32 games split between Moncton and Val-d’Or Foreurs and was selected for Team Canada’s roster at the World Junior Championship, taking home a silver medal.

The 20-year-old was ready to make the jump into pro hockey and has steadily improved his game ever since moving to Southern California. But he still hadn’t scored a pro goal until Saturday.

Spence achieved that milestone in the first period, as he opened the scoring with a power play strike in an eventual win over the San Diego Gulls that also saw him produce an assist. Adding that goal to his 13 assists makes Spence the AHL’s active scoring leader among rookie defensemen.

After the game, Spence said he was always looking to score, but he didn’t have to do anything special on the shot that finally hit the back of the net.

“I was looking for one for a lot of games now and tonight was the one that finally went in,” he said. “It was great…it was a good pass by (TJ) Tynan, and I just put it in.”

A San Diego player knocked the puck away from the net in frustration after the strike, but Tynan made sure to retrieve it as a memento for the rookie. The goal was the highlight, but Saturday’s game was one of Spence’s best overall nights in a Reign sweater so far.

Ontario Assistant Coach Craig Johnson, who led the team behind the bench that evening, also took note of Spence’s all-around play, mentioning how visible he was after the game.

“Spenny had a lot of jump tonight, you could see him dancing on the blue line,” Johnson said. “He made some really good plays in 5-on-5, finding the shot late on the power play goal like he did, and he put it in the perfect spot as well. He had a really good hockey game. You can see he’s improving and getting better and better every game.”

Both Spence and his coaching staff expected a transition period at the start of the season, but he’s been improving his game and growing his confidence incrementally. The right-shot defender spent a week on the ice at Development Camp in August ahead of the Rookie Faceoff event in Arizona, where he was in the lineup for all three of the Kings’ prospect games. Then it was on to the team’s main training camp, where he did enough to earn his second career NHL preseason appearance before he was eventually assigned to Ontario.

Spence not only played in the game against San Jose on September 28, but he also scored LA’s first goal of the night in the second period and received praise from Head Coach Todd McLellan after the game.

“Spence, for example, we weren’t sure what to expect. We knew he was a really good player, but he’s grown on us, each and every night he comes in and seems to get better.”

Ontario opened the season with Spence on its third defensive pairing alongside veteran Cameron Gaunce. But the following night in game two, he fell victim to the numbers game and was out of the lineup. That was the first and only time this season that the rookie didn’t play.

In each of the next 18 Reign games and in between during practice, Spence was on the ice, developing his game and getting used to life as a pro.

“You come into the American Hockey League and you realize really quickly how great of a league it is,” said Reign Assistant Coach Chris Hajt. “You’re playing against men and guys that are in their thirties and late twenties that are doing it for a living. But [Spence] has gotten better and better every day.”

In a short time period, Spence had to improve in different areas while being relied on defensively.

“He’s really taken on defending versus the rush and he has a very good stick,” said Hajt, who works closely with the team’s defensemen. “He has understanding of gaps and what he has to do away from the puck to allow him to play with the puck. Any young defenseman needs to continue to work on their play without the puck and that includes d-zone, net-front battles, and using proper technique.”

Then, due to injuries and players unavailable due to COVID-19 protocols, Spence was recalled by the Kings on Dec. 17 and flew east to join the team on the road. Although he didn’t appear in a game before he returned to Ontario, the experience was proof that he’s getting closer to playing at the highest level.

Due to postponements and the league’s holiday break, Spence had to wait another 12 days before rejoining the Reign lineup for game action. He was ready, though, when he got his chance and assisted on two of Ontario’s goals, including one of his most impressive plays of the season, a cross-ice saucer pass to Martin Frk that was blasted into the net for a power play goal.

“He has poise with the puck, he makes plays, and is very mobile with good composure,” Hajt said after Spence’s return on Dec. 29, an overtime loss in Bakersfield. “On the power play it was a beautiful pass to Frk there and he had another play where he got an assist. He’s continuing to develop his 200-foot game and being counted on in situations where we need him not just offensively but defensively as well.”

Now, with some of Ontario’s key power play contributors like Frk and Sean Durzi getting their shot in the NHL with the Kings, Spence is quarterbacking the first power play unit and doing it with success.

“We’ve been relying on him a lot and since Durzi’s been up top, he’s been put in that role and is doing a good job,”Hajt said. “We rely on him heavily as a first-year guy and he’s deserved it, he’s deserved the minutes that he’s been playing.”

Since that Dec. 29 game, Spence has produced four more points on the power play, including three at home last weekend. In total, his seven man-advantage assists are second-most on the team behind Tynan.

“Frky’s such a threat on the power play but we have a lot of skilled players on our team so it wasn’t that big of an adjustment,” Spence said when discussing the success of the special teams unit. “It’s a 5-on-4 for a reason, we should have control on that play and with the breakout, Tynan is such a great player and he breaks it in and sets the play up. We have a lot of good guys on our power play even on the second unit as well so we just want to be a fast tempo team and I think we’ve been doing pretty well so far so we just want to keep that momentum going.”

Ontario’s man-advantage unit has been at or near the top of the AHL rankings all season and is currently second overall in success rate at 25%.

That success has drawn more attention to Spence as the Kings and their fans look to the future. He’s solidified himself as a prospect that could be in the team’s long-term plans down the line. But while he’s with the Reign, Spence’s focus is continually on improving his game in the league he’s currently playing in without looking too far ahead.

“As the season goes on, I want to be more comfortable and adjust to the league,” said Spence. “Right now I think I’m doing a good job, but there’s still room to improve for me to work on my game. So far it’s been a good adjustment and I just want to keep it going.”