Off of the longest break of his professional career, a “reset” Cal Petersen back in action for Kings 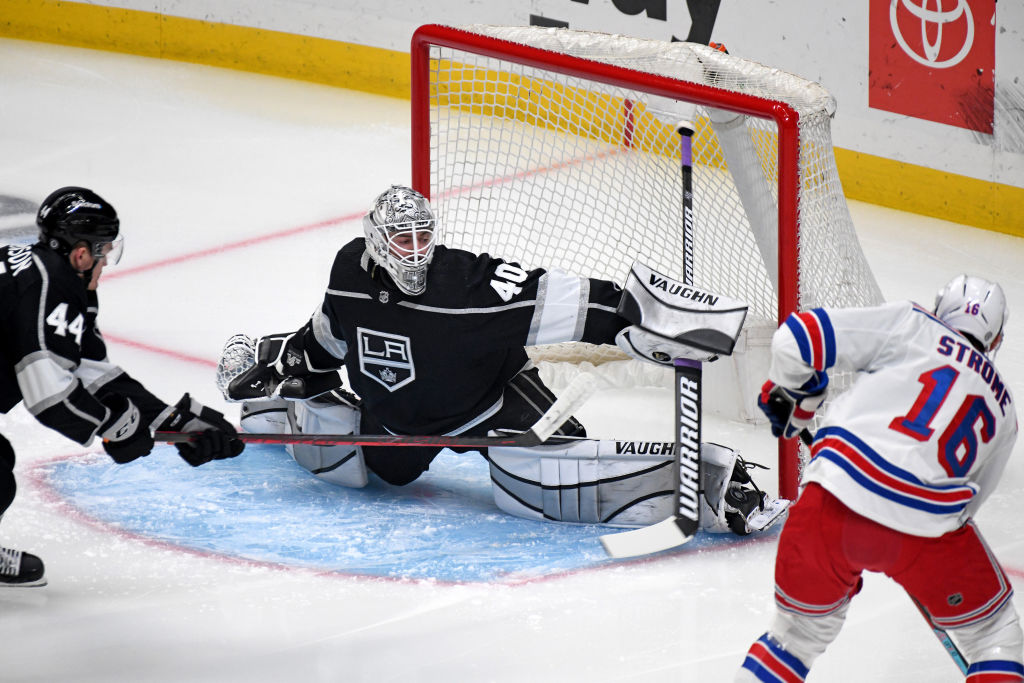 If your LA Kings fandom began on January 8, you’d likely have no idea of what Cal Petersen went through over the past month.

You’d have seen the Iowan post a shutout over the Detroit Red Wings, hear plenty of nice things said about him after the game, followed by a stellar, 22-save effort in a 3-1 victory over the New York Rangers, one in which the quality of his saves vastly outweighed the quantity. Petersen’s play over the last 72 hours has been exemplary, though it was the 33 days before that made it all the more sweeter.

By Petersen’s estimation, that’s the longest he’s ever gone between starts in. aseason. From December 6 in Vancouver, with the Kings on the wrong side of a 4-0 shutout defeat, to January 8, Petersen’s win over Detroit, it was a long stretch without game action for the 27-year-old netminder.

“It’s been the longest I’ve ever gone in a season between games, so that was a new challenge for me, something I had to work through, find ways to get my mind right,” Petersen said. “Every day, it’s just been preparing for the next opportunity and trying to take advantage of that.”

That next opportunity is one that saw a revolving date continuously moved around, typically due to circumstances outside of Petersen’s control. He was not at fault against the Canucks, but what’s unique about the goaltending position is that only one can play on any given night. And, in the four games following, that goaltender was Jonathan Quick, who was stellar with a 3-0-1 record as he allowed just five goals on 130 shots in that stretch.

Then came December 18, the first of a back-to-back set in Carolina and Washington, with Petersen set to return to action. At morning skate, however, another factor beyond his control kept him out of the lineup – the most negative, positive news you can receive.

Petersen was added into COVID Protocol that morning, forcing him out of action for ten days, isolating him from his teammates in Raleigh.

“It was just batten down the hatches inside the room and stay somewhat sane,” Petersen said of his time in protocol. “I went for a couple of long walks, just to get some fresh air. It was kind of unique, it was weird being away from the guys, knowing that they’re carrying on without you, but they made an effort to make you feel like they’re still thinking about us and working out a way for us to get back home.”

Once he got back home, Petersen did his best to maintain his fitness levels but his stay in protocol, combined with the NHL’s Holiday Break, limited exactly what he could do.

He wasn’t allowed on the ice at all, so when he finally did return to practice, on December 28 for morning skate before the game against Vegas, it almost felt as if the past three months of conditioning, practice and fine-tuning didn’t exist.

“The first practice that I got back, it felt like the first skate of the summer after a couple months off, that felt really weird,” he said. “I was happy that my fitness was still there, that was never really an issue at all, it was more so getting my rhythm back, getting the timing back, seeing NHL shots again. That was probably the biggest adjustment.” 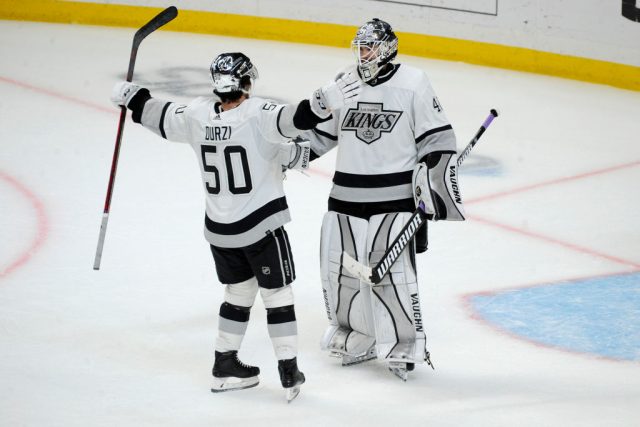 Though it didn’t take a ton of time to find that rhythm in practice, implementing it into game action was another factor that was outside of his control. Quick’s play hadn’t tailed off much, with victories over Vancouver and Philadelphia cementing his place as the team’s starter in the interim.

It’s a bit of a catch 22 – It’s hard for a goaltender to get it going again without playing games, but Quick’s level of play made it challenging for him to come out. With only one net, Petersen had to take the right approach with the right attitude. He treated his practices as game-like scenarios as best as he could, controlling the only thing he could control in that moment.

“Since I wasn’t playing as much, practice was kind of my game,” Petersen said. “I approached every practice like it was a pseudo-game, tried to battle on every puck and play out everything, not take any reps off. I wanted to really utilize that as best I could so that when I did get that next chance, it didn’t feel like I was behind the play, or doing anything outside of what I was doing for the past month or so.”

That mental side of things was as important, if not more so, than the physical element.

Petersen felt that he handled the physical side of returning to action about as well as he could have. He worked heavily with goaltending coach Bill Ranford to replicate game-like situations during practice, focusing on things like shots through traffic, rebound control and other offensive situations he might encounter when he returned to the net.

However, it wasn’t as if Petersen was rolling on all cylinders before he was forced out of the lineup. By his own admission, he wasn’t playing a ton and with Quick’s performance, it was hard to find a groove and perform to the level he holds himself to. With that in mind, he used his time off to push the reset button. With well over half the season remaining, there was plenty of time to get back on track, and he knew it.

“I kind of took it as a chance to reset, go into this period after COVID, use the rest and the little pause to figure out how I want the [rest] of the season to go,” he said. “It was a tough situation, but you have no other choice than to turn it into something that’s worthwhile and helpful. I tried to do that and just make sure I was doing everything I could to prepare for the next chance when I got in. I think that little break kind of helped out with that.”

Everything came to the forefront on Saturday, when Petersen made his long-awaited return to the net.

After ramping Petersen’s workload back up during practice, Head Coach Todd McLellan and the coaching staff had a split in net in mind when heading into games against Nashville and Detroit, with Quick starting on the front end and Petersen the second night.

Prior to the start, McLellan talked about how Petersen has all the tools and all the skills he needs to go out and be successful. We’ve obviously seen it from him earlier this season and most of last season as well. While a couple of tough outings, Quick’s performance and the combination of protocol and cancelled games kept Petersen out of the net, none of that mattered when he took the crease on Saturday.

He was back, stopping pucks once again……well he was back between the pipes, that is.

Petersen’s first game back featured exactly zero shots on goal for nearly 10 minutes in the first period, until he found himself staring down Detroit center Pius Suter on a shorthanded breakaway just shy of the halfway mark. A confident, steady Petersen came out to the top of his crease and made a glove save look a lot easier than it was, keeping the momentum of a solid first period going, while not allowing a rebound on the play.

“It was nice to make that save [early], it gave me some confidence off the bat,” Petersen said of that play. “Might as well get a hard save to make out of the way and jump back in.”

While it was his first save of the night, it wasn’t the only big one he had to make, with McLellan complementing a few different stops he made down the stretch to preserve his first shutout of the season.

While non-committal in between games as to who would get the net against the Rangers the following night, the Kings went back to Petersen, who got a big of a different introduction to a game last night. Less than a minute into the first period, Petersen faced a cross-crease 2-on-1, as he sprawled to his left in spider-like fashion, denying a Grade-A opportunity that could have thrown the game on its side in the blink of an eye.

Instead, that save was one of 23 he made, as only a top-class Mika Zibanejad deflection separated Petersen from his second consecutive shutout.

“I thought [the goaltending] was outstanding again,” McLellan said after Petersen’s second straight victory. “30 seconds into the game and he had to make a huge save, that could have changed the night, but he made some really good ones. He’s worked real hard the last month to do what he’s done in the last six periods. Good for him, he deserves the accolades he’s getting right now.

As the Kings move forward, with a back in action Cal Petersen partnering a never lost it Jonathan Quick, it’s hard not to be optimistic. It’s worthwhile to think back to the seven-game winning streak earlier in the season, a time that saw neither goaltender take control of the net, because the other refused to give it up.

On that winning streak, Quick and Petersen traded off quality starts, passing momentum and good performances back and forth, every other game.

It was the most successful period of the season thus far for the Kings, in terms of wins and losses, and has been a proven recipe for success, in spurts, since Petersen came up to the NHL. The two netminders posted a combined .948 save percentage on that winning streak, allowing less than two goals per game on average.

“They’ll push each other,” McLellan said yesterday. “In today’s game, you have to have two goaltenders. As I said the other day, the one thing Cal couldn’t control is how well Jonathan played, and he was happy for him and I’m sure Quickie is happy for Cal right now. Having both of them playing well, not a lot of teams can say that. If we have that, were lucky.”

Lucky. Accurate for the Kings for sure. However, even though luck is typically associated with those who attended Notre Dame, luck’s got nothing to do with Petersen’s play over the last two games, and the fight back he’s shown to get there.

By Zach Dooley
427 Comments
Behind the Scenes