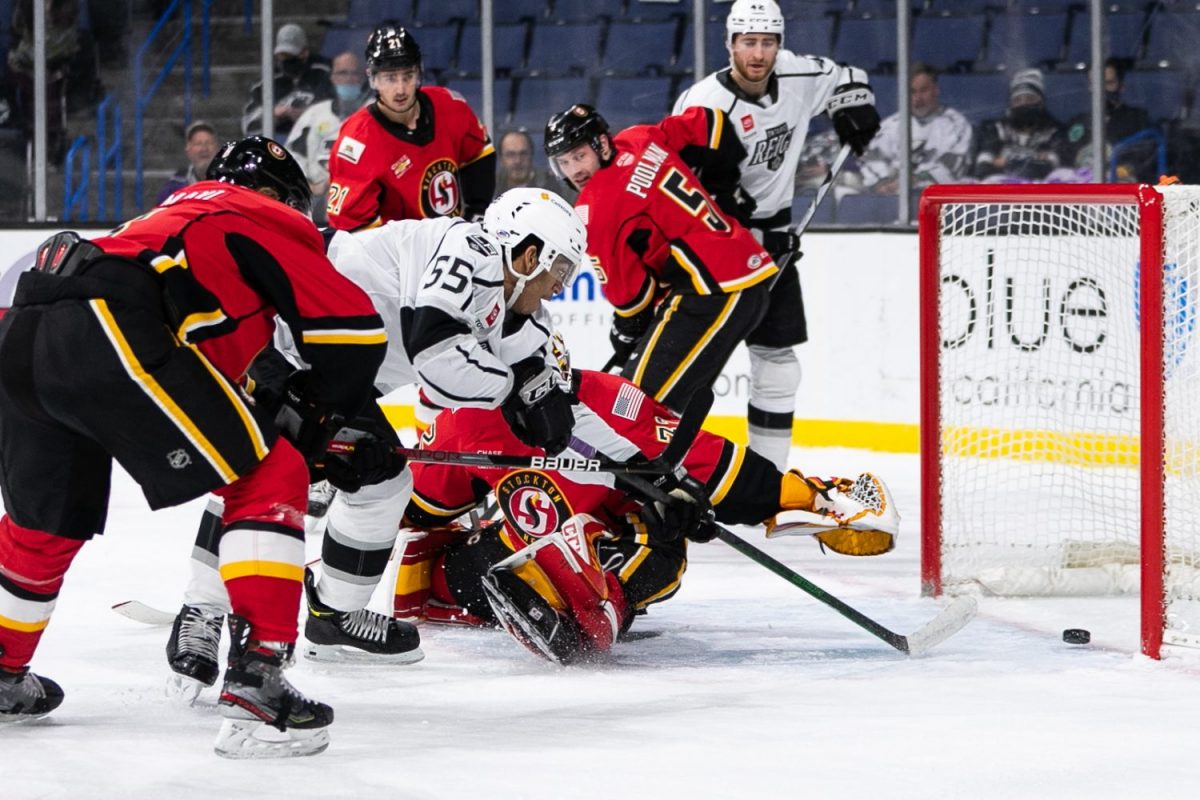 The Ontario Reign (16-6-3-1) played into overtime for the fifth time in their last six games, but surrendered a goal just 24 seconds into the extra frame and fell to the Stockton Heat (21-5-2-1) by a final score of 5-4 on Sunday afternoon at Toyota Arena.

Forwards Quinton Byfield and Tyler Madden led the way offensively for Ontario, each registering a goal and an assist in the contest, while TJ Tynan and Gabriel Vilardi both picked up two assists. Reign goaltender Lukas Parik stopped 38 Heat shots in his first AHL start.

More from Reign Assistant Coach Craig Johnson and Parik below.

Stockton capitalized on a penalty to Vilardi just 16 seconds into the game when Eetu Tuulola found the back of the net at 1:49 of the first to put the Heat in front 1-0.

The Reign evened things up at 1-1 when Samuel Fagemo struck for his 10th goal of the season, finishing a 2-on-1 with Brayden Burke at 5:16. A second assist on the play went to Tynan, the third member of the line.

The Heat went back in front on a breakaway finish by Matthew Phillips at 14:25, but Byfield got Ontario level again less than two minutes later with an excellent finish in front of the net off a pass by Vilardi at 16:17.

The Reign owned the second period, scoring twice to take a two-goal lead into the third at 4-2. First, Madden netted his ninth of the year off a net-front pass by Byfield at 7:13, before Jaret Anderson-Dolan deflected a power play shot by Jordan Spence behind Stockton goaltender Dustin Wolf at 15:15. It was the second straight game that Anderson-Dolan and Spence combined for a man-advantage strike, and Anderson-Dolan is now tied for the team lead in power play scoring with six goals on the season.

But the Heat came on strong in the back half of the third period to get back in the game. Walker Duehr made it a 4-3 game at 10:52 before Martin Pospisil tied things back up at 4-4 at 15:36.

Stockton won the opening faceoff to begin overtime and converted quickly with a game-winner by defenseman Connor Mackey who scored on a rebound after an initial save by Parik.

The Heat totaled 46 shots on goal in the game, including 18 in the first period to get off to a strong start, and held a 46-27 edge in the contest. Both clubs finished 1-for-2 on the man-advantage. Wolf picked up the win for Stockton with 23 saves.

The Reign return to action at Toyota Arena on Friday night when they host the Henderson Silver Knights at 7 p.m.

Craig Johnson
Initial thoughts on his team’s play after the game
We got excellent goaltending from Lukas Parik, I thought he gave us a chance to win the game and get two points. We had trouble managing the puck and give credit to them. They were good on stick, they had good checking details and they created some turnovers because of their work ethic so give credit to them too but again, really liked the game that Lukas played and we had some really good efforts from certain guys.

On Parik’s effort, despite facing a lot of shots
He was good yesterday, he came in to a tough situation to get put into in your first AHL game and he showed today with his start that he’s growing as a goaltender and he’s got to keep progressing.

On what he liked about the Madden-Byfield-Vilardi line
What I really like about their line is that they kept pucks low. They made it hard for Stockton to get it from them. And when you extend possession, you create mistakes and that’s what they did a really good job of doing. They brought pucks to the net, they brought pucks to the point when they had to and they had a net-front presence the whole game.

Lukas Parik
On what it was like to get his first AHL experience
It was straight up just like throw a fish in the sea and just swim, so that’s kind of what I felt like. I think that’s the best for a goalie just to start like that, you just have to adopt quickly and it was great, the guys really helped me yesterday only having three shots against in the third period and guys really played great today but it’s just unlucky that we didn’t win today.

On how quickly it took him to adjust to the pace of the game
You have to adjust quickly, let’s just say that. It’s not how you want to you just have to adopt but it wasn’t that bad for me to adopt to the game but today for me was much better taking the warmups just knowing that I’m going to go in the net. It was much better today than yesterday.

On what his first pro season has been like so far
It’s been great. The organization, the coaches and teams are really amazing. Probably the best organization I’ve been with for a longer time. It’s really been great.