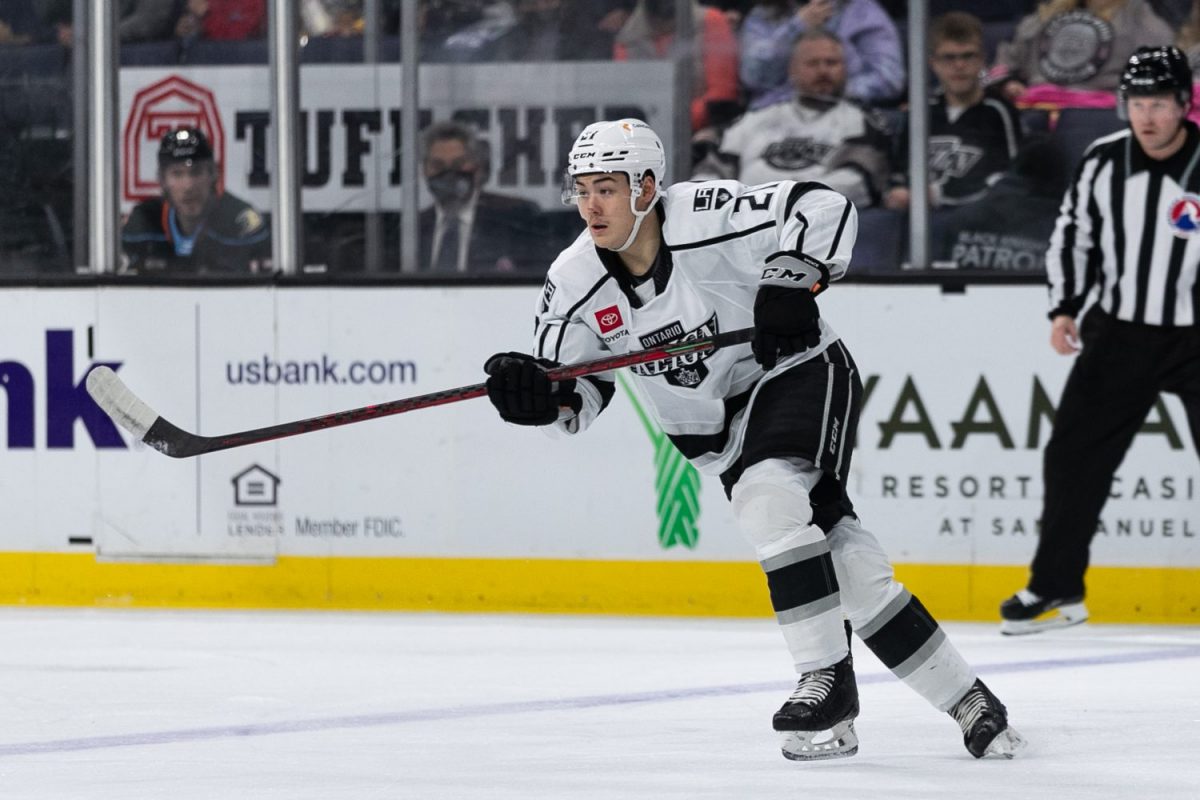 For the second straight game, the Ontario Reign (16-6-2-1) came from behind in the third period and prevailed in overtime. Saturday’s game-winner came from Samuel Fagemo, who, along with linemate TJ Tynan, each posted a goal and two assists in a 5-4 victory over the San Diego Gulls (10-12-2-0) at Toyota Arena.

Reign defender Jordan Spence also scored his first professional goal for Ontario in the first period, while Quinton Byfield found the back of the net for the second straight game and goaltender Lukas Parik earned a win in his first career AHL appearance.

Ontario took a 1-0 lead when Spence found the back of the net on the power play at 5:32 of the first with a blast from the right point. His strike came with assists from Tynan as well as forward Gabriel Vilardi. Vilardi, who had two helpers on the night, has now posted five points in his last four games (3-2=5).

The Gulls, however, had an immediate response just 15 seconds later, tying the game at 1-1 on a tally by Brent Gates Jr.

San Diego seized the lead for the first time in the opening minute of the second on a shot by Nikolas Brouillard to make it 2-1. Reign goaltender Garret Sparks, who had made the start in net, was injured on the play and was forced to leave the contest. Parik entered in relief and played the final 42 minutes.

Ontario evened the game at 2-2 on a deflection of a Spence shot by Jaret Anderson-Dolan at 5:30 of the middle frame. It was the second goal on the man-advantage for the Reign, with an additional assist credited to Fagemo.

But San Diego took the lead back at 12:07 when Brayden Tracey scored his ninth goal of the season to make it 3-2 in favor of the Gulls.

With less than two minutes remaining in the second period, Byfield knocked home a loose puck at the top of the San Diego crease to tie things up once again at 3-3. The goal, which came off a rebound, had assists credited to Vilardi and forward Tyler Madden.

Once again, the Gulls quickly re-claimed the lead, scoring 1:05 after Byfield’s goal on a one-timer by Hunter Drew to take a 4-3 lead into the second intermission.

Tynan tied the game for Ontario at 13:20 of the third, scoring his sixth goal of the year with a quick move to his backhand in the low slot that came with assists by Fagemo and defenseman Helge Grans.

Neither team was able to break through for the remainder of regulation. Fagemo’s winner came on the first shot for either team of the overtime at 3:33 of the extra session. The former LA Kings second-round pick one-timed home a pass by Tynan on a 2-on-1 to secure the win. His nine goals this season rank second-most on the team.

Ontario doubled-up San Diego with a 36-18 shots-on-goal advantage, including a 14-3 edge in the third period. The Reign finished 2-for-5 on the power play, while San Diego ended at 1-for-2.

Parik turned aside nine shots in a relief effort of Sparks, who ended with five stops in the first 20:51 of action. San Diego netminder Francis Marotte made 31 saves on the other side for the Gulls.

The Reign are right back at Toyota Arena on Sunday afternoon to close out their home weekend against the Stockton Heat at 3 p.m.

Craig Johnson
On what he saw from his team in a dominant third period
We were very competitive. We competed, we won battles, we kept a lot of pressure on them by putting pucks behind them and put a lot of pucks to the net. So we had a really good period, we stuck to it and guys really stepped up.

On what he saw from Fagemo while playing with Tynan
They were really good today. That whole line with Burke, Fagemo, and Tynan they controlled play and they made plays. Both Sammy and TJ had a goal and an assist, so that’s a heck of an effort by them.

On Lukas Parik making his AHL debut in relief
He stepped in and it’s really neat when you see a young player that comes in and gets his first AHL game and he gets a win out of it. Really happy for Lukas, he’s put in good work this year and he keeps getting better and better.

Jordan Spence
On if he’s been feeling more comfortable lately
As the season goes on, I want to be more comfortable and adjust to the league and right now I think I’m doing a good job, but there’s still room to improve for me to work on my game but so far it’s been a good adjustment and I just want to keep it going.

On what it was like to play in a back-and-forth game
There was a lot of fans today which was great and a lot of support today. It was a tight game and it went to OT and we had a big win but it’s always a fun game when you have a game like that.

On what it felt like to score his first pro goal
It felt great. I was looking for one for a lot of games now and tonight was the one that finally went in. It was great, it was a good pass by Tynan and I just put it in.