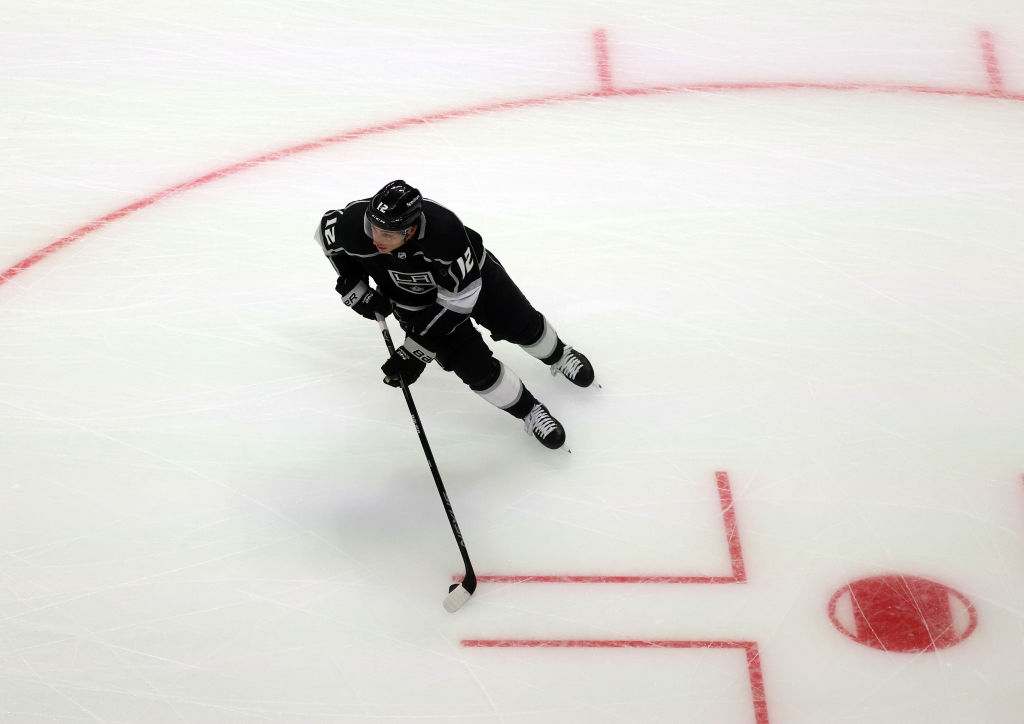 Back to the grind, Insiders.

Coming off an interesting one last night against Nashville, the Kings got back to work this morning at Toyota Sports Performance Center, in advance of tomorrow’s game against the Detroit Red Wings.

The Kings sit at 2-2-0 from the first four games of a current seven-game homestand. It’s been a series of different types of games, extended with last night’s contest, as the Kings outshot the Predators by a 48-20 disparity, only to lose 4-2. Puck possession metrics were kind to three of the Kings four lines, and ironically enough, the only line to score was the one on the wrong side of the distribution of chances.

Todd McLellan discussed consistency last night, and how he feels that he’s had three, somewhat consistent lines, but hasn’t gotten that fourth line going just yet. It’s been a revolving door of personnel on what’s been the team’s listed third line, which has had a different alignment in six of the last eight games. Hard to establish consistency when the personnel is so inconsistent, but then again, that’s the world we live in today.

With that behind us, here’s how the Kings lined up during today’s practice –

Defensemen Drew Doughty and Sean Durzi did not skate today but are not thought to be at risk of missing tomorrow’s game at this time. Consider them in more of a “maintenance day” category, following a shorter practice today in between games.

To update on others not on the ice, the quartet of individuals in protocol (19, 39, 86, 91) have not yet cleared and therefore have not resumed skating at this time. Andreas Athanasiou returned to the full group today after he had been back on the ice on his own, before or after practices, over the last week or so. A sign that he is at least progressing towards a return, one that McLellan originally estimated might have been possible by the end of this homestand.

The PK has found itself under a greater spotlight over the last few games, with six PPG’s allowed from the four games since the holiday break. While the results haven’t been at the standard the Kings have set, forward Trevor Moore believes that right now it’s individual plays, or breakdowns, that are costing the Kings, as opposed to a larger, structural problem.

McLellan said that the coaching staff and the team put a lot of time over the recent break into not only looking into what the Kings are doing on the PK, but also what other, successful teams around the league are doing.

He noted that the findings showed that there aren’t a ton of differences right now between the Kings and other teams, nor are there when compared to what the team was doing last season.

“When we review our team, we review situations, we review the goals that are scored, the ones that potentially could go in, and then we look at a lot of other teams,” McLellan said. “A lot of time off [before last game], we had four days off, when looking at what other teams are doing versus what we’re doing, there’s not a major difference. Last year, when our penalty kill was at or near the top of the league, there wasn’t a major difference.”

McLellan did agree in many ways with what Moore said, noting certain elements of penalty-kill situations that need improvements. The Kings aren’t far off, in McLellan’s mind, but as he says below, close doesn’t mean good in this league. Areas to improve, but not necessarily a massive hill to climb to get things sorted.

“Sometimes, they go in for whatever reason, whether it goes off you or you’re just outside the shooting lane, which is something that I believe we can improve in,” McLellan said. “We’re not quite there, we’re close, but close doesn’t get you a lot on the penalty kill, you’ve got to be precise. Some of it is individual mistakes, sometimes delinquent responsibility, sometimes just through effort, but they both exist.”

Comebacks
Speaking with Dustin Brown last night, he said he’s felt like there have been more comebacks around the league now, compared to say 10 years ago. And, from the eye-test, I feel like that would be an easy agree – seemingly every other night as you watch highlights or read box scores, it feels like a team came from multiple goals down to either win or earn a point.

Last night’s game against Nashville wasn’t quite that. The Kings were down 3-0, fought back to make it a 3-2, but didn’t quite come all the way back to get a point or two from the contest. Around the league though, it’s been something that has been appeared to be a lot more prominent, something that McLellan agreed with Brown on.

“I think you see it happen more often,” he said said. “Carolina/Columbus, I think it was seven goals in a row. The game is maybe a bit more unpredictable than it [used to be], I think there’s more staying power right now with teams sticking with it longer. Penalties, power play, I don’t know if the whistle gets put away as often as it used to, so there’s opportunity to get back into a game. You’re never really out of it, I think that’s been proven.”

The numbers in terms of multiple-goal comebacks, and multiple goal comebacks in the third period specifically are up, though by a very slight margin, however the stats on NHL.com do not account for a team that came from behind to earn a point, just situations where a team comes back to win. We’ve seen 35 comeback wins of 2+ goals so far this season, a trend to monitor as we approach the eventual end of the season.

Upcoming Schedule
A busy time for the Kings organization over the next three days!

The Kings and Ontario Reign are both in action tomorrow, with both teams on home ice. The Reign then complete a back-to-back on Sunday afternoon at Toyota Arena, before the Kings return to action on Monday against the Rangers. Plenty of hockey to watch, whether it be in-person here in Southern California, on TV via Bally Sports West or AHLTV, or through either team’s online radio stream.

With injuries, players in protocol and potential moves to be made, we could always see some roster changes between those games, but that will shake itself out over the next couple of days.

By Zach Dooley
158 Comments
Behind the Scenes