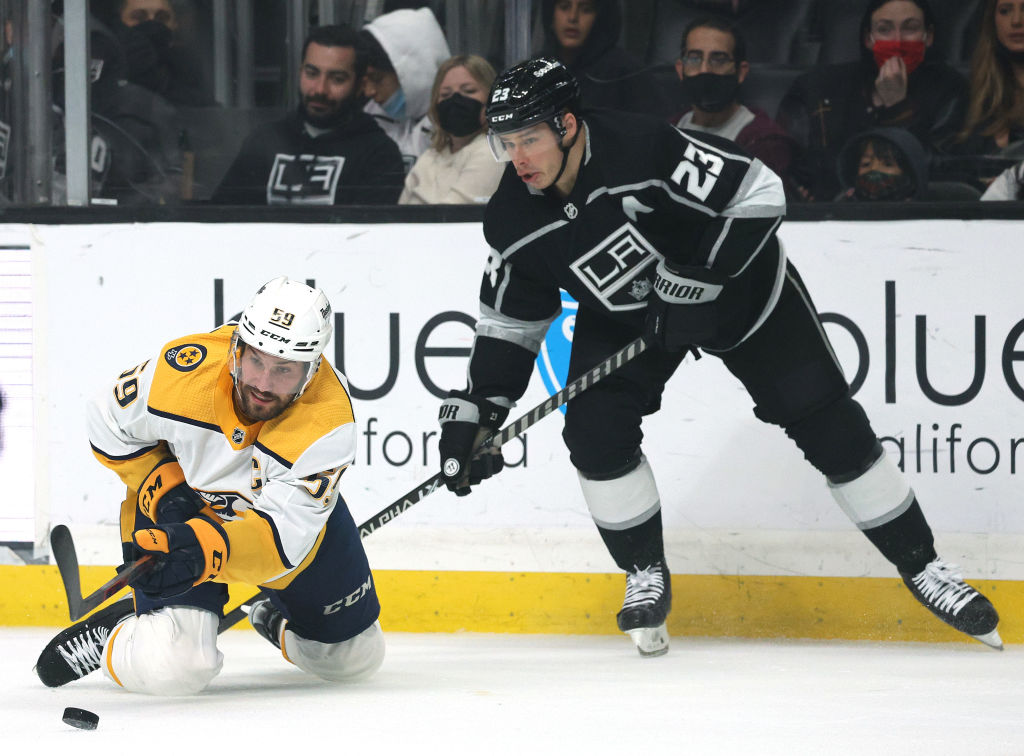 The LA Kings were unable to complete the comeback, as they fell by an eventual 4-2 final against the Nashville Predators on Thursday evening at Crypto.com Arena.

Dustin Brown and Martin Frk scored for the Kings, to dig the team out of a 3-0 hole, though the hosts could not pull any closer in tonight’s defeat.

Nashville capitalized on a pair of first-period power plays to open up a 2-0 lead through 20 minutes. First, less than four minutes into the game, Filip Forsberg walked into the right-hand circle and beat Kings netminder Jonathan Quick on the glove side to open the scoring. Later in the period, the Predators struck again on the PP, as Matt Duchene worked his way through the slot, got to the front of the net and squeezed the puck home to double the Nashville lead.

The Predators struck again early in the second period as Matt Luff scored in his return to Los Angeles. The former King got two looks from close range and put home his own rebound from just outside the crease to make it a 3-0 game on his first NHL goal of the season, with Michael McCarron and Nick Cousins picking up the assists.

The Kings got on the board through Brown later in the period, to make it a 3-1 game at the second intermission. Brown capitalized on a miscue from Nashville in the offensive zone, as the veteran forward went the other way on a breakaway, deked to his forehand and slotted the puck home for his fifth goal of the season. Brown’s goal came in his first game back in the lineup, after he missed the previous three in COVID Protocol.

The Kings pulled one goal back in the third period, as Frk tallied on the man advantage during his season debut. With the Kings on a power play midway through the third period, Frk unloaded a half slap-shot from the right point that beat Nashville netminder Jusse Saros on the blocker side and in. The goal was Frk’s first of the season in the NHL.

The Kings had several opportunities to tie the game but weren’t able to find an equalizer before the forward Yakov Trenin hit the empty net late to seal the deal for the visitors.

On how he felt first game back
I felt good. I didn’t have any symptoms, so I was able to work out all throughout it. I felt pretty good [tonight].

On his takeaways from tonight’s game
If you look at our 5-on-5 play, I think we outplayed them, the whole night, from start to finish, the very first shift was really good. We gave up two power-play goals, empty net. It’s one of those games where, 5-on-5 I think we’re the better team, but that’s not always the way it goes.

On the challenge of coming back from a three-goal deficit in the NHL
10 years ago it was impossible, now it seems like it happens every night around the league, there’s three, four-goal leads being blown. I’d say that’s a trend, maybe I’m wrong, it just feels that way over the last two to three years where no lead is really safe.

On what he read on his goal
I had a breakaway from our zone, so I didn’t want to think too much about it. I was going to shoot, but he was a little bit off his angle, he adjusted and I just made a move, a move I’ve done before. Breakaway, is what it is.

On if he feels there are things to take from tonight’s game that can translate to wins
You have to build on whatever you have. I haven’t been around the team for the last two weeks, so it’s just getting the vibe of the team back. It’s a good sign that, when we’re down 3-0, we don’t just fade away. The last game I played, we were down 2-0 in Washington and we found a way. Having that type of mentality, regardless of the score we have a chance, that’s another good sign.

On his frustration level of controlling 5-on-5 play but coming up short
It’s frustrating, you have to prevent in certain situations and finish in others and we failed to do that tonight. Everything else in between was fairly good. If you’re 1-for-3 on the penalty kill, on most nights you’re not winning. We don’t score enough to give up two power plays right off the bat and then fight our way back, not against a team like that. It’s pretty simple, and at the other end of the rink, we had a penalty shot, Lizzo had a breakaway, missed the puck, we had rebound opportunities, open nets, their goaltender played tremendous, their D boxed out and did a good job. Some of those need to find their way into the net.

On if he felt the team had energy, but lacked polish
Yeah, I think for the most part, our guys had some legs and a sense of timing. We started the game well, obviously the two power-play goals, that set us back a little bit. To go down three against that team, that’s tough, but we kept chipping away. They very rarely, probably won’t this year give up a three-goal lead, they’re that strong of a club. I could agree with all those things about energy, legs, timing but at the end of the day, the execution is what got us and we didn’t execute well enough.

On the even-strength play versus special teams
5-on-5, we do that to a lot of teams. Let’s face it, our team needs to improve in the special-teams area. We concentrate on that, we work on that and it just needs to get better. If this group wants to move forward and go where it needs to go, the penalty kill has to get better and the power play has to get better.

On how the new additions fared and the lineup adjustments that were needed
I wish we could get consistent. The players that haven’t played for a while, Brownie hasn’t played since December 19, so good for him to come back in. Jacob coming into the lineup was really good, Lias hasn’t played for a while, so those players came in and gave us fairly good nights. I can’t wait until we can get our whole team back, but that’s not going to happen because Edler and Walker are done for a long, long time, Walks [for the season] and hopefully we get Edler really late in the season. At least the guys that we can get in our lineup, get them going. I think we have three lines right now that go quite well, we need to find that fourth, find consistent pairs that work for us. Like anybody else, we’re trying to find the right combinations through COVID.

On Martin Frk’s game tonight
Marty played well, let’s face it, he did what we asked him to do coming up here, shoot the puck in the net. He was the one guy that finished on the power play, good for him. He wasn’t afraid to shoot it, he wasn’t a liability defensively, a real good night for him.

On the team’s ability to chip away in games and fight back, as opposed to last season when games would get away
Well, we’ve had some of those games too, it’s human nature to get down. This game was no different than the one in Carolina, we were down 2-0 real quick in Carolina, one was on the power play on the missed coaches call. We responded much better here tonight, but we were fresher here at home, so that’s a good thing. I don’t question the character of our group one bit. There’s nights where we question the input into the game, maybe the effort, we get lazy at times, but the character is there.

– Dustin Brown scored his fifth goal of the season in his first game back in the lineup since December 19, out of COVID Protocol. The goal moved Brown into sole possession of 20th all-time against American-born players in goals.
– Martin Frk scored his first goal of the season, in his first game of the year with the Kings. Frk has now scored in his season debut in two of three seasons with the Kings organization.
– Adrian Kempe’s penalty shot in the second period marked the third consecutive Kings game that featured a penalty shot (2 for, 1 against), the first time that has happened in franchise history. The last time it happened in the league was by the Montreal Canadiens (three consecutive games, April 2-6, 2009). It was the fifth time there was a penalty shot in a Kings game this season (2 for, 3 against), most of any team in the league.
– Drew Doughty tallied another assist this evening, giving him 14 helpers and 17 points from 15 games played. Doughty has at least one point in 10 of 15 games played this season.
– Viktor Arvidsson collected his 11th assist of the season and has five points (2-3-5) over the last two games. The helper marked his first career point against Nashville, the team he was with for the first seven years of his career.
– Forward Matt Luff scored his first goal of the season for Nashville, coming in his first game back in Los Angeles.

The Kings are scheduled to practice tomorrow at 11 AM at Toyota Sports Performance Center in El Segundo.