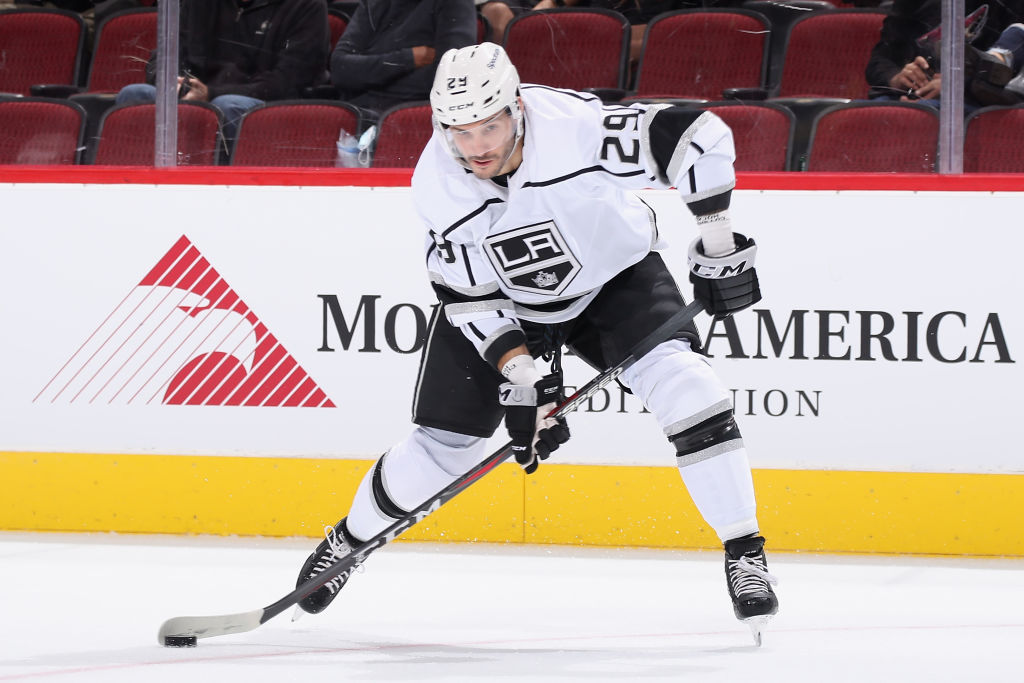 TONIGHT’S MATCHUP: The Kings are back at it this evening, as they continue a seven-game homestand tonight against the Nashville Predators.

HEAD-TO-HEAD: The Kings and Predators squared off once already this season, with Nashville skating to a 2-1 victory in October at Bridgestone Arena back in the first road game of the 2021-22 campaign. Anze Kopitar scored the lone Kings goal on that night, while Dustin Brown and Drew Doughty each tallied an assist. Tonight marks forward Viktor Arvidsson’s second career game against the team that drafted him.

KINGS VITALS: The Kings held an optional morning skate in advance of tonight’s game, which is par for the course with how the team has operated throughout the middle of their season.

Jonathan Quick is tonight’s expected starter between the pipes, giving him four consecutive games since the team returned from holiday break. All-time against the Predators, Quick is 5-12-2, with a .892 save percentage and a 2.92 goals-against average. Cal Petersen logged the first head-to-head matchup this season back in October and is expected to be tonight’s backup.

The Kings are expected to make a total of four roster changes between Saturday’s win over Philadelphia and today’s game versus Nashville. As noted throughout the week, the Kings have seen four players – Carl Grundstrom, Alex Iafallo, Alex Turcotte and Christian Wolanin – enter into COVID Protocol.

On the other end, forward Dustin Brown and defenseman Olli Maatta are both out of protocol, with Brown expected to enter into the lineup tonight, though Maatta will not. Additionally, expect to see Lias Andersson check back in, as well as Martin Frk and Jacob Moverare, who were both activated from the taxi squad earlier today.

Based on yesterday’s practice, here’s how the Kings are projected to line up this evening –

The bottom-four defensemen and bottom-six forwards still have some potential unknowns in terms of alignment, though that group of individuals marks everyone on the active roster. Yesterday, we saw Arthur Kaliyev and Lias Andersson swap spots in some drills, and while we’d expect to see Moverare playing with Roy, Todd McLellan could opt to move Tobias Bjornfot into that role, and play Moverare with Sean Durzi.

PREDATORS VITALS: The Predators have reached the middle stop of a short, three-game road trip. Nashville was victorious on Tuesday in Vegas and will conclude its swing West on Saturday in Arizona.

For the visitors, if usual starter Jusse Saros is between the pipes this evening in Los Angeles, it would mark his second game of the season against the Kings. Earlier this season, Saros made 25 saves on 26 shots on goal, earning the 2-1 victory back in Nashville. The Finnish netminder is 2-1-0 from three appearances lifetime versus the Kings, with a .902 save percentage and a 3.07 goals-against average.

As of this writing, Nashville has just one player in COVID Protocol – defenseman Dante Fabbro – while the team also has forward Tommy Novak as an option this evening. Per Brooks Bratten of the Predators team website, here’s how tonight’s opponent lined up in their last game out –

An option for Nashville tonight is former Kings forward Matt Luff, who signed a one-year contract with the Predators this summer. Luff, who played on Tuesday in Vegas, has one assist from four NHL games this season and is currently on the taxi squad.

A Frk’n Return
Four days ago, Martin Frk was at Toyota Arena in Ontario, collecting two assists in a comeback victory with the AHL’s Ontario Reign over the Henderson Silver Knights. Today, Frk is set to flank Anze Kopitar on the first line for the LA Kings, during his first NHL game of the 2021-22 season.

“Yeah, it’s a treat, I couldn’t believe that, when I looked at the lineup, and I was there…I’m not nervous to play a game, but I’m a little nervous to play with [Kopitar], he’s one of the best players in the league,” Frk said, with a laugh. “It’s a treat, my mind was going yesterday, all day, it’s different. I’m just going to enjoy it. I either do good, or I do bad, it’s one of those things. Definitely really excited, for myself, my wife and my family and I cannot wait to start.”

Frk has had an interesting road with the Kings organization. After he signed as a free agent during the summer of 2019, Frk was placed on waivers and eventually assigned to AHL-Ontario out of training camp. After he proved himself to be one of the AHL’s best goalscorers, he eventually worked his way into the NHL picture, scoring six goals from 17 games played with the Kings, earning a two-year contract extension in the process.

As the 2020-21 campaign approached, Frk appeared set to make the team out of training camp, but an untimely injury during the Black-White scrimmage limited him to just one period of one NHL game and he eventually found himself back in the AHL with the Reign, where he also found himself to begin this year. 14 goals later – second in that league, by the way – he finds himself with another opportunity here at the NHL level, one that he’s keen to take advantage of.

“I want to bring what I did with Ontario and try to bring it here,” he said. “Obviously, it’s a different league and all the players are better, this is a big opportunity for me. I’m just going to enjoy it as much as I can, it could be the only one. I’ve been scoring and putting up points [with the Reign], so if I can do that, it would be great, but in the end, I just want to make sure that I play a good game tonight and have as much fun as I can. It’s fun to be in the National Hockey League and I’m really excited for tonight.”

RW1 and PP1 – An good Frk’n opportunity indeed and one that I think it’s fair to say everyone involved is pulling for to work out. An easy player to root for, regardless of where you’re coming from.

Easing Em Back In
Frk’s opportunity on the top line comes at the expense of Alex Iafallo, who is in COVID Protocol as of earlier this week. It also comes as forward Dustin Brown returns to the lineup at the same time, with Brown slotting in, at least for tonight, on the third line.

As veterans Drew Doughty and Phillip Danault returned, we saw them at less than 100 percent sharpness in their first game back. For Brown, he hasn’t played a game since December 19, when the Kings concluded their road trip in Washington, DC. That marks 18 days in between games, including a 14-day gap without being able to skate.

With that in mind, easing a player like Brown back in was the preference of the Kings at this time.

McLellan shared with us today that Brown had been playing sick, though not positive, before that game against the Capitals, meaning he was not feeling 100 percent for a couple of games prior. Such is life today, however, when it’s only the test results that are required to keep you out of the lineup.

Being the tough, hard-nosed player that he is, Brown was determined to play in those games, though he was forced out of the lineup when he entered into protocol on December 26. The combination of all of the above factors put a long, extended break in front of the veteran forward.

“He probably should have been out before that, because of the way that he felt on that road trip, but Dustin being Dustin, there’s not much that will keep him out of the lineup,” McLellan added. “He’s committed to playing, and he was, but going through the Christmas break, came back and lo and behold, he goes into COVID, so now we’re talking about a player who hasn’t played in a much longer period.”

Now, Brown provides a veteran presence and some potential stability to the team’s third line, one which hasn’t had much of it so far this season. Here’s to hoping for a smooth return for 23!

A Frk’n Debut
Okay, that one doesn’t really play.

But, we do have an NHL debut slotted for tonight, with defenseman Jacob Moverare set to play his first career NHL game this evening against Nashville. Moverare has been up and down, up and down over the last couple of weeks, not missing much AHL time with Ontario in terms of games, while frequently practicing with the Kings in between.

The 23-year-old defenseman appears set to check into the lineup in place of Wolanin, who was added into COVID Protocol yesterday afternoon. Olli Maatta, who recently returned from protocol, is not quite ready to go tonight after he missed Tuesday’s practice with a non-COVID illness. We’ve seen how important it’s been to ramp players back into the lineup on their return from protocol and the Kings won’t take any chances with Maatta.

In Moverare, the Kings are getting a steady, reliable defenseman with more experience than you might expect from a debutant. Moverare is a veteran of just 48 AHL games, between last season and this, but he logged three full seasons in Europe, two in Sweden’s top men’s division and one in Finland’s, before coming over to North America last winter. While with Frolunda HC in the SHL, Moverare won a league championship in 2019, as well as the Champions Hockey League in both 2019 and 2020. A winning pedigree, combined with a steady skillset, is a nice thing for a young player to bring into tonight’s game.

Todd McLellan on Moverare
He’s intelligent, he anticipates plays both offensively and defensively and he’s fairly steady, his game hasn’t been all over the map. He just plays and gets things done. His teammates really like him, they enjoy playing with him when he’s on the ice and our guys have adopted him pretty well too. I’m excited for him individually, it’s a good reward for him, he’s done his homework and at the end of the night, I hope he remembers the night as a positive.

Chris Hajt on Moverare’s game
He’s played very well for us this year and last year. He’s a really intelligent player, someone who uses his mindset, his ability to think the game, to really be solid for us in all different aspects. There’s a lot of deception in his game, he’s a very good defender with a great stick that has an offensive ability as well so we’ve leaned heavily on him and we will continue to do that.

Kings and Predators, coming up next in Los Angeles!