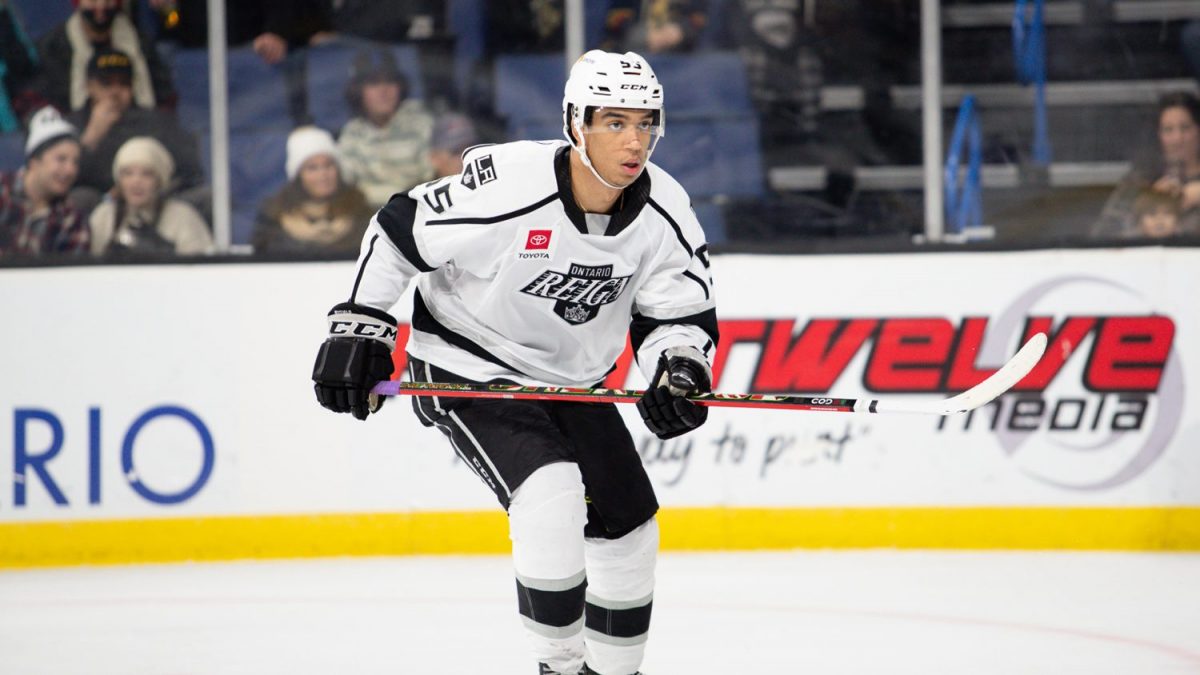 The first three months of the season haven’t gone as planned for Quinton Byfield, but his most recent moment was easily the high point. On Sunday afternoon, skating with the Ontario Reign, Byfield’s game-winning goal in overtime capped off a late comeback, one that saw the Reign erase a 2-0 deficit in the third period.

Ontario held possession of the puck for much of the overtime, which lasted 2:14, but Byfield’s deciding strike was the only attempt they needed. With plenty of room to maneuver in 3-on-3 play, Byfield tucked a laser of a shot underneath the glove of Bakersfield Condors goaltender Stuart Skinner, which had been precise all night and a large part of the reason Ontario was behind in the game.

There were assists given to forwards Jaret Anderson-Dolan and Martin Frk on the play, but Byfield did most of the work by himself, as he exited the offensive zone with control of the puck before he ramped up his speed with an attack at the goal.

“I knew there was a guy on me so I had to take it out to the neutral zone and give myself a little more space,” Byfield said after the game when discussing his strategy against the Condors in the extra session. “Then, I was turning with speed there and I saw there were three across the blue. I knew Esposito there was a forward and he was flat footed so I knew I could beat him with a quick move.”

Overall, Byfield’s five shots-on-goal were tied for the most of any skater in the contest and the second year pro’s earlier chances during regulation influenced the decision he made in overtime when he had a look at the net.

“I knew they were a little gassed there,” Byfield said. “And [Anderson-Dolan] kind of just laid it off to me when he came in. I took it to the net, and Skinner, he had saved a couple high on me. I thought he’d be thinking I’m going high, so I wanted to go a little bit lower and found the right spot.”

For the Reign, the victory snapped a season-long three-game winless streak that included overtime losses to Tucson and Bakersfield, as well as a regulation defeat at the hands of the Henderson Silver Knights on New Year’s Eve.

Ontario’s highly touted group of prospects and veterans got off to a hot start to begin the season, but since mid-November they’ve played close to .500 hockey. Adding Byfield into the mix, for however long he needs at the AHL level, gives another boost to the squad.

“I think we have a great group here,” Byfield said. “I think coming into the third period, we knew our second wasn’t the greatest and I think we definitely knew we could come back. There’s so much skill in there and a lot of older guys that know what it takes to win as well so they definitely led us there and I think we came out and played our style and ended up getting the job done.”

The overtime goal was the first point of 2021-22 for Byfield, who was playing in his sixth AHL game of the season for the Reign. The 19-year-old fractured his left ankle during an LA Kings preseason game in early October, an injury that had him away from game action for almost 10 weeks. He returned on December 10 and appeared in four contests with Ontario before he was recalled by Los Angeles 10 days later.

But, the following day, before he could take his opportunity to work his way into the lineup with the Kings, Byfield was placed on the non-roster/COVID-19 list. The extra time off, however, turned out to be an unintended benefit, as he was able to continue the healing process from his earlier injury.

“The foot was still bothering me the first couple games back,” said Byfield. “Then, I got COVID so I got a little bit more time to heal and that definitely helped.”

He was able to return in time for practice Thursday and was cleared to play in two games last weekend. While he’s still getting his game back up to speed, the former number-two overall pick is hoping he doesn’t have to deal with any more setbacks.

“It’s definitely been a little bit of a tough season for me,” Byfield said. “I was starting to finally get back in the swing of things and then I got COVID. I’m just happy to be back on the ice and I hope there’s no more setbacks this year, but it was definitely a big moment to finally get the first one in the bag.”

Now that he’s gaining confidence again, the talented center is expected to continue to progress and earn another look at the NHL level, where he played six games at the end of last season. To do that, he’ll need to show more of the consistency he had with Ontario in 2020-21, when he scored 20 points in 32 games on eight goals and 12 assists.

“You can see he is feeling better and getting his timing back,” said Reign Assistant Coach Chris Hajt after Sunday’s game. “I haven’t gone through it, but you can only imagine just having a few skates and then playing right away. He’s just going to get better with time, and he did. He gave us a real good game [on Sunday], lots of shots, had opportunities and put in a huge goal in overtime so we’re definitely happy with his game and we’ll look forward to more as time goes on.”

After feeling more comfortable on Sunday, there’s extra practice time for Byfield to get ready to play in Ontario’s upcoming weekend games, a schedule that includes home contests on Saturday and Sunday, against San Diego and Stockton respectively. The Reign were on the ice Tuesday and will also have practices Wednesday, Thursday and Friday before the matchup with the Gulls Saturday evening. 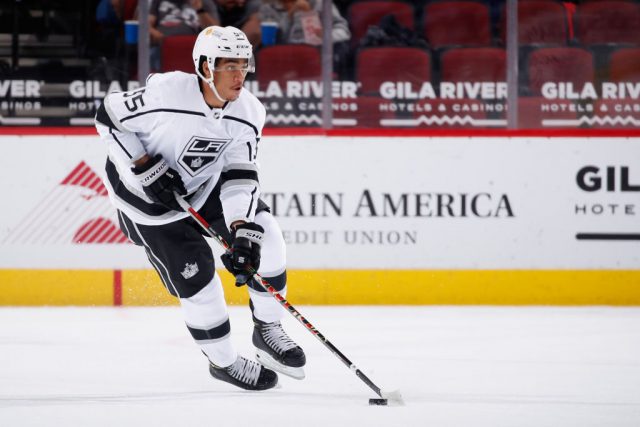 GLENDALE, ARIZONA – MAY 05: Quinton Byfield #55 of the Los Angeles Kings skates with the puck during the first period of the NHL game against the Arizona Coyotes at Gila River Arena on May 05, 2021 in Glendale, Arizona. (Photo by Christian Petersen/Getty Images)