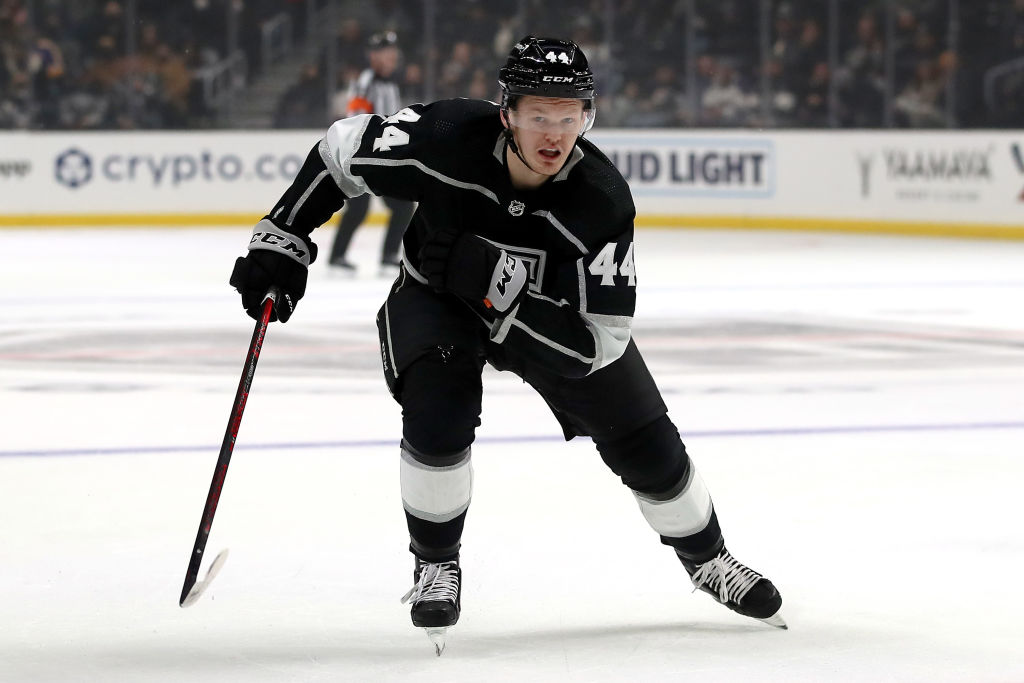 When you’re in season, three practice days feel like a damn month.

The Kings haven’t played a game since Saturday, which feels like we’ve had the entire offseason in between two games less than a week apart. That’s what an NHL schedule can do to you. In the AHL, teams play mostly on the weekends and while it still feels prolonged in between a Sunday game and one the following Friday, it’s to be expected at that level. Typically playing every other day in the NHL, however, four days between games is an eternity. Thankfully, that eternity comes to a close tomorrow evening.

With the practice time, however, came a plan of attack. Day 1 saw more attention paid off the ice than on it, with Day 2 adopting a physical, battle-oriented approach. Day 3 was about fine-tuning and preparing for tomorrow’s game against Nashville, another red-hot opponent making its way to Crypto.com Arena. The Predators are 9-1-1 from their last 11 games played, marking yet another run on its way to Los Angeles.

That’s for tomorrow though. For today, the Kings were back on the ice, with 12 forwards, eight defensemen and two goaltenders in action today. Defenseman Olli Maatta and Jordan Spence joined the group, while defenseman Christian Wolanin and forward Carl Grundstrom departed……Wolanin and Grundstrom are now in COVID Protocol, bringing the current total to four individuals impacted and unavailable for tomorrow’s game.

Maatta’s return today saw him slot in place of Wolanin on the second defensive pairing with Matt Roy, while Moverare and Spence skated together on a de-facto fourth pairing. With Grundstrom’s absence, the Kings now have just 12 forwards at their disposal, meaning that Martin Frk is set to play tomorrow – and in a prominent role too – on the team’s top line.

With that all in mind, here’s how the group lined up for the final practice in advance of tomorrow’s game –

*Andersson and Kaliyev seemed to rotate at various times, unless I’m just so prone to expecting Kaliyev on the line with Lizotte and Lemieux. He took at least some rushes with Kupari and Brown, however, with Andersson taking some with Lemieux and Lizotte.

How about that RW1! Though officially on the taxi squad as of this writing, Frk is expected to make his season debut tomorrow with the Kings. In a bit of déjà vu to 2019, Frk has lit up the AHL, as he leads the Ontario Reign in scoring, earning his promotion to the big club in the process. Starting out with Anze Kopitar and Adrian Kempe as his linemates provides a really exciting opportunity for a player who has earned it through his play at the minor-league level.

“Really good opportunity for him,” Todd McLellan said, of Frk. “He’s again proven in the American League that he’s an elite player there. He’s going to get his opportunity here, he’ll get time with Kopi to start with, he’s going to get power-play time and those are all areas that he should excel in. Let’s hope that he takes advantage of it, I believe that he can, and he finds a way to stay.”

Pushing The PP
The Kings put some considerable focus into today’s skate on the man advantage, following extensive work yesterday on the penalty kill. Here’s how the units lined up this morning during practice –

Frk is the notable change here, with his booming slap shot joining the left side of the top power-play unit. Frk’s spot on the man advantage is no secret – his one-timer is a massive strength, something that we’ve seen on countless occasions when watching the Reign play, and at times here with the Kings as well.

Here’s to hoping his presence can help to jumpstart a unit that has struggled in terms of goals as of late, Adrian Kempe’s 5-on-3 goal from Saturday outstanding. Prior to that game, the Kings had scored just once on the man advantage in the nine games preceding, with a 1-of-25 conversion rate since they scored three power-play goals in the win over Edmonton on December 5.

Perhaps even more impressively, the Kings are 5-3-1 in that stretch. This isn’t a team that needs to win on special teams to win games, but imagine what is possible if they start to…..

Driving Offense
Speaking of increasing scoring, we spoke with Mikey Anderson on his desire, and that of the team, to create more opportunities, and in doing so points, from the backend.

Anderson’s stat line isn’t necessarily one of an offensive defenseman, but it’s also not necessarily his job to be that type of player, either. Anderson has found a nice home alongside Drew Doughty on the team’s top defensive pairing, one that typically cedes very little in terms of shot attempts and higher-danger opportunities….at least, you’d think that would be the MO of that pairing.

Interesting Find – Per @NatStatTrick, among pairings w/ 200+ minutes played at 5-on-5 this season, the duo of Mikey Anderson & Drew Doughty rank (on a per/60 min basis)

While looking to see how the Anderson/Doughty duo ranks in terms of shot suppression – they are a Top 10 pairing in the NHL in that category, by the way – it was their on-ice “shots for” totals that jumped off the page. The defensive duo ranks in the NHL’s Top 7 in shot attempts for, scoring chances for and high-danger chances for, among the 69 defensive pairings that have played at least 200 minutes together this season at 5-on-5.

A bit of a contrast to last season’s numbers, showing that perhaps Anderson is responsible for more offensive opportunities than his raw statistics – one assist this season – give him credit for.

“I think everyone wants to add more offense,” Anderson said today. “As a whole, point-wise, our D aren’t necessarily thriving with it, but I think we create more than we did last year. We’re better pinching, keeping plays alive in the o-zone, trying to get the pucks to the forwards. At the same time, we don’t have a lot of six, seven-goal games, we win a lot of games 3-2, 2-1, where it’s hard to put up bigger points.”

A big focus as of late has been the Kings shot volume amongst defensemen, which is a big reason for getting more attempts as well as shots on goal. That has not just applied to Anderson, but the group as a whole.

He indicated that while it’s been a push from the coaching staff, it’s also something that’s come through the players. He feels that the defensemen have put more of a focus on getting shots through and the forwards are now expecting more shots from the point as a result. This has led to some good shifts and chances down low, even if it doesn’t result in a point for the defenseman on the play.

“As a d-core, I think we know we wanted to add more and we know we’ve got more to give,” Anderson expanded. “Coaches have pointed it out, we’ve talked about it as a group and the forwards are ready for us to shoot the puck. I think that’s been the big one for us as a whole, we’ve all tried to establish shots from up top, create second [chances], plays down low, have the forwards recover it. I think, over the last couple of weeks, we’ve had some really good shifts down low that start with a point shot, some deflections have gone in. It’s something we’ve tried to improve upon and build.”

Blood Drive
Lastly, the Kings have partnered with Children’s Hospital Los Angeles to run three blood drives, the first of those will be held tomorrow afternoon outside Crypto.com Arena. The drive is scheduled to be held from 12:30 PM to 6:30 PM, with opportunities on January 13 and January 20 as well. Those who donate will receive a pair of tickets to the Kings game that night, as well two more to a future game.

Kings set to skate tomorrow morning in El Segundo, prior to the return to action against Nashville. More to come, Insiders!