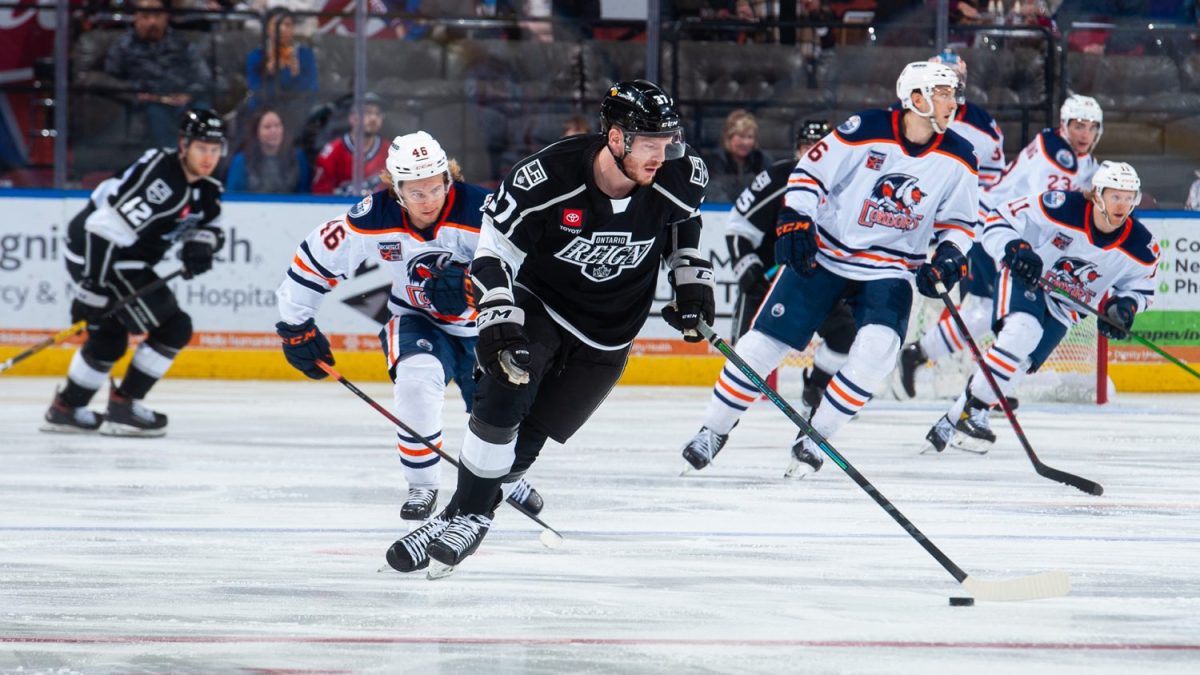 TONIGHT’S MATCHUP: The Ontario Reign open up its 2022 portion of the schedule with a Sunday afternoon tilt against the Bakersfield Condors at Toyota Arena. Ontario holds a 3-0-1 record against the Condors this season, but most recently fell in Bakersfield on Wednesday evening in overtime. Prior to the OT loss, previous Reign victories came on Oct. 22, Nov. 6 and Dec. 4 with the Reign emerging victorious by scores of 3-2, 6-3 and 3-2, respectively.

WHAT TO WATCH FOR: The Reign need to earn at least a point in Sunday’s contest to maintain hold of second place in the Pacific Division, as the Henderson Silver Knights are right on their heels with wins in five of their last six games. Ontario is looking to get back on the attack after scoring just a single goal in Friday’s loss to Henderson. The Reign rank second in the AHL on offense, scoring an average of 3.75 goals per game. Bakersfield has earned points in each of its last four games, posting a 2-0-1-1 mark that dates back to Dec. 15 and sits in seventh place with a .500 points percentage.

LAST TIME OUT: In their final contest of 2021, the Ontario Reign fell in regulation for just the second time at home to the Henderson Silver Knights by a final score of 4-1. Forward Jaret Anderson-Dolan had the only goal for Ontario in the loss, breaking up a shutout bid by Henderson goaltender Jiri Patera just before the final buzzer. Goaltender Garret Sparks got the start and made 26 saves for the Reign.

DUDAS DELIVERS: Forward Aidan Dudas has been a constant in the Ontario lineup this season, appearing in all 23 of the team’s games. With an assist on Jaret Anderson-Dolan’s third period marker Friday, Dudas picked up his sixth helper of the season. His season scoring total of 11 points has tied a previous career-high set during 2020-21 when he posted six goals and five assists in 37 games. The Parry Sound, Ont. native has also totaled a +5 rating.

AVOIDING THE BLANK SLATE: Jaret Anderson-Dolan’s sixth goal of the season came with less than two minutes remaining in Friday’s game and ended a shutout bid by the Silver Knights and goaltender Jiri Patera. Ontario has scored at least one goal in all 23 contests this season. The last time the Reign were held off the scoreboard came at the hands of Bakersfield and goaltender Olivier Rodrigue on April 16, 2021

SCOUTING THE CONDORS: By earning a point from an overtime loss in Henderson on Saturday, Bakersfield has kept its points percentage at .500 for the season. The Condors are hoping to improve in 2022 after a slow start to the campaign as they aim to defend their 2021 Pacific Division title. The Condors have plenty of games remaining on their schedule, having played just 21 contests, which is tied for the lowest in the AHL. Led offensively by returning forwards Seth Griffith, Cooper Marody, Brad Malone and Adam Cracknell, Bakersfield has a veteran group. Griffith is first on the club with 22 points (7g, 15a), while Marody leads the team with eight goals after potting two against Ontario on Wednesday. Malone has 17 points in 20 games, while Cracknell has posted 14 points on four goals and 10 assists. Bakersfield regained the services of goaltender Stuart Skinner this week after a successful NHL stint in Edmonton. In his absence, netminders Ilya Konovalov and Olivier Rodrigue formed a tandem in goal, with Konovalov holding a 2.48 goals-against average and a 0.900 save percentage along with a 3-3-2 record.

GABE THE GREAT: Forward Gabriel Vilardi had two of Ontario’s three goals during Wednesday’s overtime loss in Bakersfield. His first strike came in the opening period on the power play, while his second marker was a highlight-reel finish which tied the game at 3-3 in the third frame. Vilardi now has nine points in 11 AHL games with the Reign this season (5-4=9).

SPENCE TURNING HEADS: Rookie defender Jordan Spence earned assists on two of Ontario’s goals Wednesday night in his first game action since Dec. 11. His helpers included a first assist on Martin Frk’s second period power play goal and a secondary marker on Gabriel Vilardi’s tying tally in the third. While Spence has yet to score in his AHL career, his double-digit assist total ranks fourth on the team among active skaters (10).