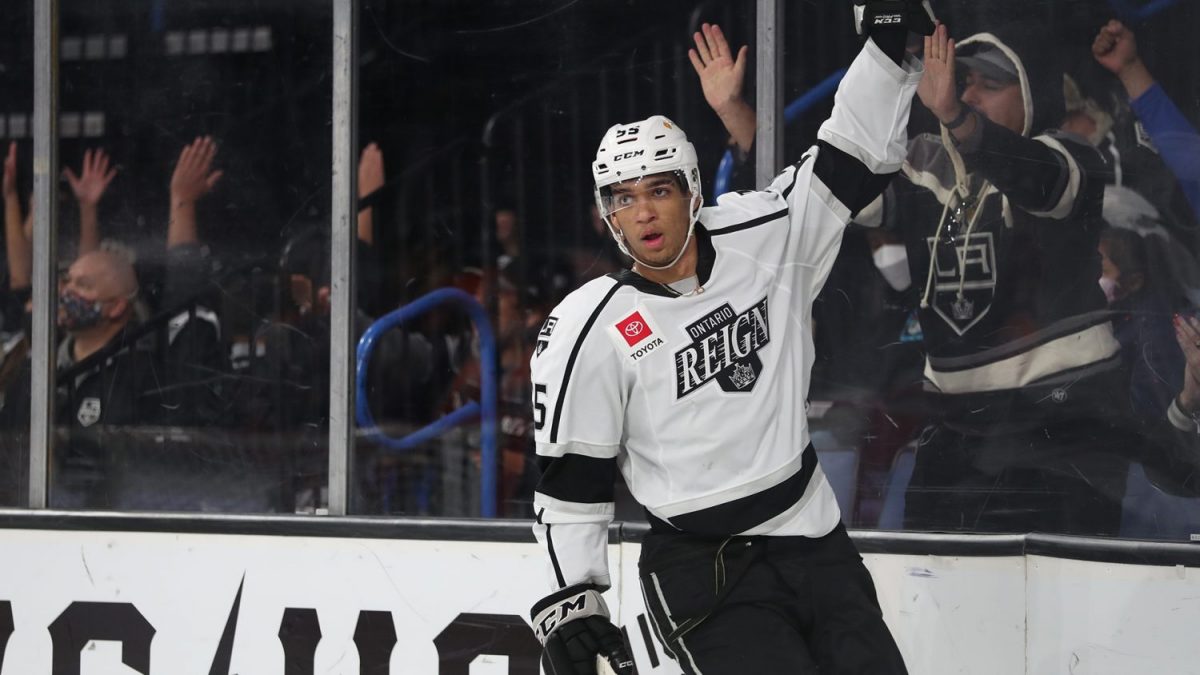 The Ontario Reign (15-6-2-1) used a furious comeback in the third period to force overtime and secured a victory on a game-winning shot by Quinton Byfield, defeating the Bakersfield Condors (8-8-3-3) at Toyota Arena by a score of 3-2 Sunday afternoon.

Forward Samuel Fagemo had the tying goal with less than two minutes remaining in the third, while Gabriel Vilardi got the comeback started with his third goal of the week against the Condors. Goaltender Garret Sparks made 34 saves in the win for the Reign, including multiple timely stops late in the game during the comeback.

Ontario forwards Jaret Anderson-Dolan and Martin Frk each had two assists in the victory, with Frk moving within one point of the 300 mark for his pro career.

Neither team was able to score in the opening frame, which saw Ontario outshoot the Condors 9-6, but Bakersfield took control in the middle period with two tallies while holding an 18-14 shots advantage.

Former Reign forward Tim Schaller netted the first goal of the game at 9:45, before Cooper Marody scored his third goal in two games this week against the Reign on a goalmouth scramble at 15:28 to make it 2-0. Marody’s goal was reviewed, but the on-ice officials were able to confirm that the puck crossed the line.

Vilardi began the comeback at 3:47 of the third, posting his sixth goal of the year on a wrist shot from the inside of the right circle that beat goaltender Stuart Skinner over the glove to make it 2-1. Assists on the strike went to Frk and defender Cameron Gaunce.

The Reign kept on coming with more chances throughout the period but weren’t able to solve Skinner a second time until the final minutes. After a penalty to Bakersfield’s Vincent Desharnais, Ontario pulled Sparks in favor of an extra attacker for a 6-on-4 advantage in an effort to even the game. It took multiple whacks at the puck in the crease before Fagemo lifted the biscuit up and into the net to knot the score at 2-2. Anderson-Dolan and defenseman Jordan Spence earned assists on the tying tally.

Byfield gave Ontario its 15th win of the season with his first goal in his sixth appearance of 2021-22. It was an individual effort from the top prospect, who started from his own blue line before streaking into the offensive zone and beating Skinner under the glove.

Fagemo’s tying marker was the lone power play goal of the afternoon, which put Ontario 1-for-4 on the man-advantage, while Bakersfield finished at 0-for-2. Skinner stopped 36 attempts overall in a losing effort for the Condors.

The Reign are back at Toyota Arena next weekend for games on consecutive days beginning Saturday against the San Diego Gulls. The weekend will conclude next Sunday when Ontario hosts the Stockton Heat at 3 p.m.

Chris Hajt
Initial thoughts on the comeback win by his team
You know what, guys stuck with it. We had a lot of shots in the third period and were able to find a way to come back. You don’t want to do that all the time, but we’ll take the two points and build from it.

On what he saw in the play of Garret Sparks down the stretch
Timely saves. That’s the biggest thing with tonight. We needed some saves there when we had some momentum and they had a couple opportunities they could have put in and it would have been tough to come back but he stood strong and we were able to find a way ultimately from there.

On the way Fagemo’s tying goal was scored on a rebound
Well just overall, again you’re down, you’re pressing, and we get the opportunity on the power play and we got to the interior. We put a puck at the net and guys were gritty and were able to find a way to put it in. That’s an important part, that’s where goals are scored and we need to continue to go to those areas.

On what Byfield’s impact has been over the last few games
Coming off of COVID-19 protocol, he had the first game and now today the second game. You can see he is feeling better and getting his timing back and for those guys, I haven’t gone through it but you can only imagine just having a few skates and then playing right away. He’s just going to get better with time and he did. He gave us a real good game today, lots of shots, had opportunities, was going to the areas and put in a huge goal in overtime so definitely happy with his game today and we’ll look forward to more as time goes on.

Quinton Byfield
On the comeback and the confidence within the team
I think we have a great group here. I think coming into the third period, we knew our second wasn’t the greatest and I think we definitely knew we could come back and there’s so much skill in there and a lot of older guys that know what it takes to win as well so they definitely let us there and I think we came out and played our style and ended up getting the job done.

On what he saw during his game-winning goal
I knew they were a little gassed there. And (Anderson-Dolan) kind of just laid it off to me when he came in. I knew there was a guy on me so I had to take it out to the neutral zone and give myself a little more space then I was turning with speed there and I saw there was three across the blue I knew Esposito there was a forward and he was flat footed so I knew I could beat him just with a quick move so I did that and took it to the net and Skinner, he saved a couple high on me so I thought he’d be thinking I’m going high so I wanted to go a little bit lower and found the right spot.

On what it feels like to score his first of the season
It’s definitely been a little bit of a tough season for me for sure, injured in preseason, missed a bunch of time and starting to finally get back in the swing of things and then I got COVID. I’m just happy to be back on the ice and I hope there’s no more setbacks this year and we just keep going from here but it was definitely a big moment to finally get the first one in the bag here and hopefully it just keeps going.