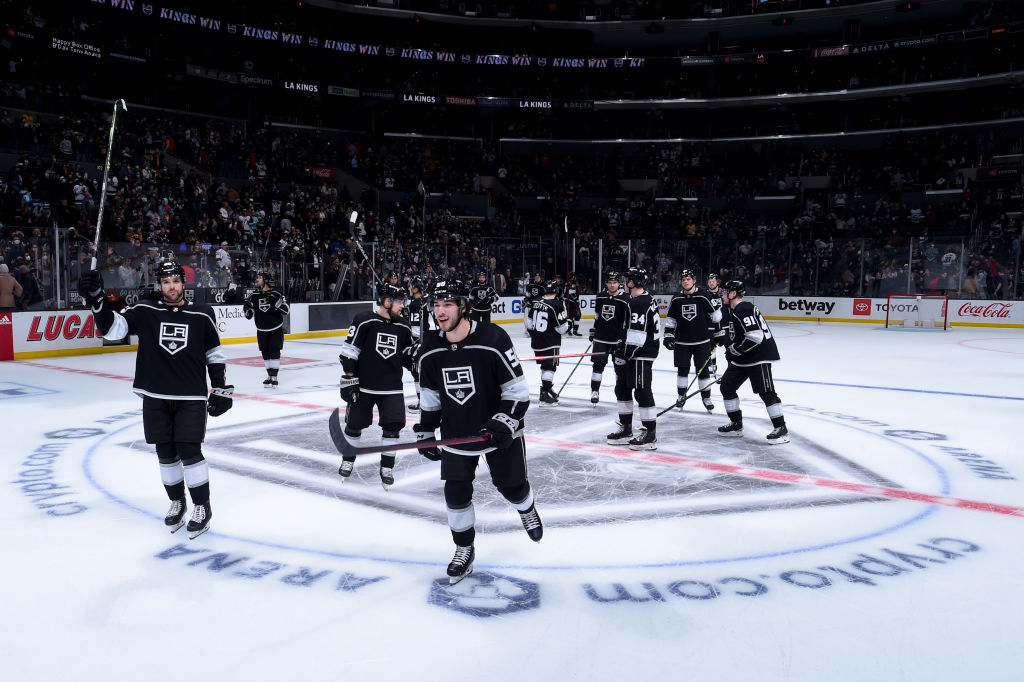 A tale of three games, Insiders!

If you go solely off of the final scores, you’d probably look at the games as a crescendo.

The game against Vegas was obviously the low point of the week, as the Kings struggled across the board in their first game back from holiday break. The team was much better on night two, correcting many of the issues that plagued them on Tuesday, skating to a 2-1 overtime victory on Thursday over Vancouver. That was followed by perhaps the flashiest win since Opening Night, featuring a goal 12 seconds in, two four-point nights and a 5-on-3 power-play goal. In terms of excitement, Saturday’s game had it, though it wasn’t the cleanest game the Kings have played this season.

Though just a 2-1 shootout victory by score, Todd McLellan felt that the win over the Canucks was his team’s best game of the week, as the Kings returned to their identity of a tough-to-play against, tenacious, strong-checking team. While Saturday’s win was as exciting as it’s been in a while for the Kings, McLellan felt that the Kings let certain bad habits creep into their game, though they weren’t punished for them in the 6-3 victory.

From that point of view, the schedule sets up well for the Kings. They got four of a possible six points, two of three wins at home, and now they pick up some valuable practice days. Not only does that time give them a chance to correct some of those bad habits, but it also allows the Kings to get closer to full strength. With four days between games, Cal Petersen will likely be ready to go by the time the Kings return to game action, with Dustin Brown and Olli Maatta likely to be cleared for game action. Those four days also bring Andreas Athanasiou, who has begun skating on his own, closer to a return while also giving Quinton Byfield four more days, whether with the NHL or AHL club, to get back up to speed.

Then there’s the other side of it. The Kings have won two straight games in convincing fashion despite two different types of flow. A commanding performance on Thursday, followed by a three-goal victory on Saturday, gives the team seven wins from its last 11 games played, dating back to early December. The Kings are finding a way to win games right now and you’d want to see how they could potentially keep that momentum rolling.

Todd McLellan falls in the former category. He’s targeted this “break” if you want to call it that as an opportunity to conduct a midseason review of sorts. Get back to basics, review larger-scale systems and get everyone back on the same page as the team gears up for a busy month of January.

At the same time, that 11 game stretch has included four wins over teams that currently occupy playoff spots. There have been a couple of lopsided defeats and disappointing performances, but those have always been followed by a convincing bounce-back effort. The 4-0 loss in Vancouver? Followed by a 4-0 shutout win over a red-hot Dallas team at home. The 5-1 loss in Carolina? Followed by the comeback win over division-leading Washington on the road. The 6-3 loss to Vegas? Followed by these last two wins at home, including a commanding win over a Canucks team on a seven-game winning streak.

As I watch my Miami Dolphins slowly work their way out of a playoff spot, I find myself with a glancing eye on the NHL’s current playoff standings as well. Though the games played column is vastly spread out, with teams ranging from 27 to 34 in that department, I see the LA Kings currently sitting in the second wild-card position on January 2. Through all of the adversity, with two defensemen out long-term, with Drew Doughty playing just 14 of his team’s 33 games, the Kings sit at four games over .500, having played the NHL’s fourth-toughest schedule to date by winning percentage. Per Tankathon, the Kings have the sixth-easiest schedule remaining, though with still more than half of the 82 games remaining, that number is likely to change.

What it shows is that the Kings have handled a relatively difficult portion of their schedule well. Over their last 11 games, their opponents have a 188-101-32 record, with the Kings winning seven of those games, and picking up at least one point from eight. A strong month of December, which sets up the opportunity for a more consistent stretch to begin 2022.

The team is off today before they return to practice tomorrow morning, beginning a stretch of three consecutive practice days in advance of Thursday’s home game against Nashville. Expecting to see some roster movement in the coming days, as the Kings activate players from COVID Protocol. Until tomorrow, Insiders!