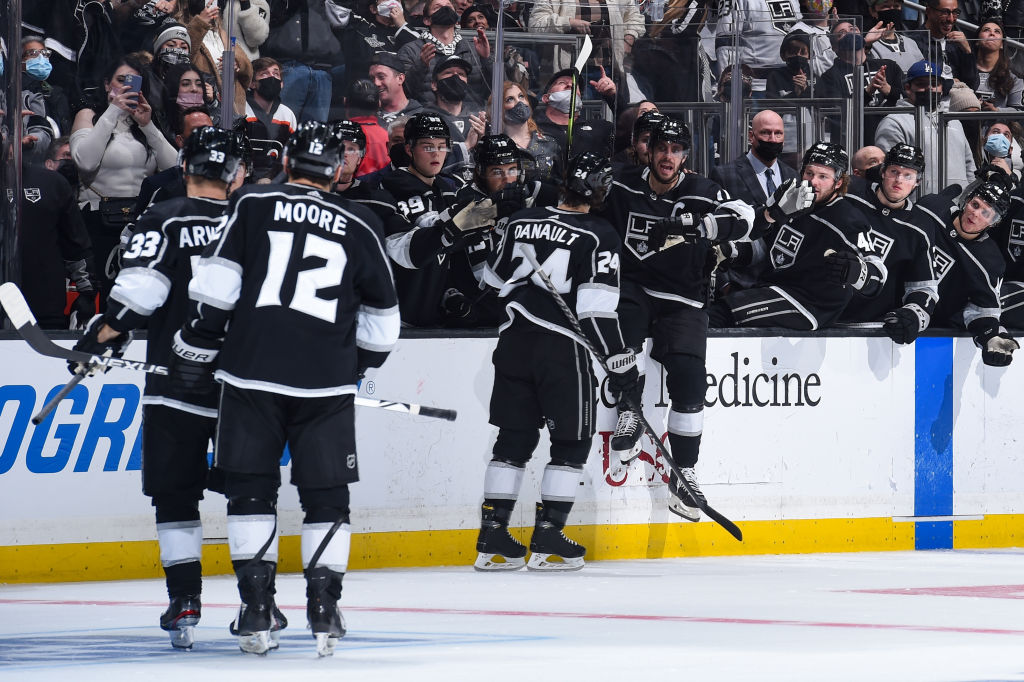 The LA Kings kicked off 2022 with a bang, as they tied a season-high in goals during a 6-2 victory over the Philadelphia Flyers on Saturday evening in Los Angeles.

The Kings got four points apiece from Viktor Arvidsson (2-2-4) and Trevor Moore (1-3-4), while Phillip Danault added three points (1-2-3) of his own. Adrian Kempe and Brendan Lemieux also scored in the victory, while Jonathan Quick made 33 saves to earn his 10th win of the season.

The LA Kings opened the scoring just 12 seconds into the game, as Arvidsson netted his seventh goal of the season to put the hosts ahead. Danault dropped a pass to Arvidsson, who wrapped the puck around the net and in. The goal was tied for the third-fastest in Kings regular-season history.

Philadelphia came back to knot the score at one, however, midway through the first period. After Jonathan Quick denied Cam Atkinson, first on a penalty shot and then on a deflection bid, the rebound of the latter fell to Joel Farabee just outside the crease, where the Flyers forward put his shot home for his sixth goal in eight games, tying the score in the process.

The hosts fought back with the second goal of the night for the second line, as Moore restored the LA advantage. After a good sequence in the offensive zone, Danault saw his shot from a tight angle denied by Philadelphia netminder Martin Jones, before Moore followed up with the rebound for the go-ahead goal.

The Kings scored twice in the second period to open up a 4-1 lead after 40 minutes. First, on a two-man advantage,Kempe wired a one-timer past Jones from the right-hand circle, extending the advantage to a pair. Later in the middle stanza, Lemieux willed his way onto a breakaway and his move to the backhand saw the puck leave his stick and cross the line to push the hosts ahead 4-1.

After the Flyers got back on the board through Kevin Hayes, a rare 6-on-3 power-play goal with the netminder pulled, the Kings regained their three-goal advantage with two more goals from the second line, to put some insurance behind the victory. First, Moore and Danault executed a 2-on-1 off the rush, with the latter finishing a nice pass from the former, pushing the lead to 5-2. Arvidsson then capitalized with the empty net to cap off the victory at 6-2.

On what was working so well for the Kings tonight
I think it was kind of just rolling over what we’ve been doing, working on in practice. After the Vegas game, we worked on a little bit of competitiveness and being harder on guys, and I think you saw that in the d-zone, and in the offensive zone too, winning pucks back and just rolling around.

On if he is relishing in the opportunity to play consistent top-six minutes of late
Yeah, for sure. I’m grateful to play anywhere, and especially grateful to play with Arvy and Phil tonight. Really good players, obviously, they see the ice so well, they think the game well. Arvy always wants the puck and he lets you know, which is great because I want him to have it. It was great.

On the 2-on-1 goal tonight
I kind of just saw the puck come around there, Arvy got to it first, his D pinched and I just saw a little room there. Phil did the hard part, which was beating his guy up the ice. That was great.

On Danault’s ability to win small battles to help his linemates
It’s huge. Getting off the wall isn’t easy in this league, and getting off the wall in those tight spaces is really hard. When you can do that, with a guy like Phil, it opens up the ice so much.

On the significance of winning his 500th NHL game tonight
I think I’ve earned my gray hair *laughs*. No, it’s a good night for me as an individual, but more importantly for the team. Wins are important and as people hit milestones, you talk about those milestones for individuals, but it’s always about the team. The guys played hard tonight, we weren’t real clean, some bad habits kind of snuck into our game a bit, but we’ll have some time to fix it now.

On the Danault line getting rewarded for their hard work tonight
Yeah and a lot of it came because they did things well defensively. They checked well, they were patient, blocked shots as we saw with Mooresy at the end and they took advantage of their opportunities. They were obviously ready to play, first shift to get in on the forecheck and get involved right away. A real good night for them. It’s nice to see Danault and Arvy, we expect that from them, but it’s nice to see Mooresy get rewarded, because he’s been snakebit a little bit, throughout the season, and for him to get on the board personally was good to see.

On if he feels he’s getting across the board efforts and contributions throughout the forwards
Yes – We’ve played three games since the break, obviously the one was not very good, but it was against a real good team that played well. I thought we played much better against Vancouver than we did tonight, but we still found a way to win, which is important. When we can spread it out all over and use four lines, for the offensive part of it at least, that’s a good thing. Tonight everybody found a way to chip in at some point.

On four days between games, and if he’d prefer to play sooner to roll momentum
Actually, you know what, for me it’s the other way. We’ll take tomorrow and rest and then we’re going to have a good review. We’ve got to review some of the midseason stuff, like a complete system review, where we talk about why we do things, how we do them, just get some of the finer details back into our game. Whether it’s penalty kill, power play, we’ve been getting beat on some of the backchecks where we’re actually working too hard, their third goal tonight I thought we over-backchecked on it, we didn’t get the sort out we needed. The practices will be valuable for us. I understand your question about momentum about keeping it going, but we can use the work.

On the 5-on-3 goal and getting a two-fold benefit from it
Really important. It was exactly that. You don’t get it and now you’re tight, you think of a missed opportunity. You go back to the Vancouver game, where we didn’t capitalize on some of our chances, it was a big goal. The way it ended, we didn’t know if we were still on the power play or not. Big goal.

– Head Coach Todd McLellan won his 500th career NHL game. He is the 27th coach in NHL history to win 500 games. It also tied him with Toe Blake for 26th most wins in NHL history.
– Viktor Arvidsson’s goal is tied for the third-fastest to open a game in regular-season history. Dave Williams (7s, 1987) and Dave Taylor (11s, 1985) were faster. Wayne Gretzky also did it in 12 seconds in 1991.
– Arvidsson (2-2-4) and Trevor Moore (1-3-4) each collected four points tonight. Arvidsson did so for the first time since April 6, 2017 (with NSH, vs DAL), while Moore did so for the first time as a professional.
– Forward Phillip Danault had a three-point night (1-2-3), his second multi-point game as a member of the Kings.
– Defenseman Drew Doughty had two assists tonight, his 12th and 13th of the season. Doughty now has 16 points (3-13-16) from 14 games played this season and five points (1-4-5) from his last five games played.
– Forward Brendan Lemieux now has goals in back-to-back games, with the game-winning goal this evening, while forward Adrian Kempe netted his team-leading 14th goal of the season.
– Jonathan Quick stopped 33-of-36 shots to earn his 10th win of the season. Quick also stopped Flyers forward Cam Atkinson on a penalty shot, the first he has faced since March 9, 2020, pushing his totals to 7-of-10 for his career.

The Kings have a scheduled day off tomorrow and are slated to return to the ice on Monday, January 3 at 11 AM at Toyota Sports Performance Center.