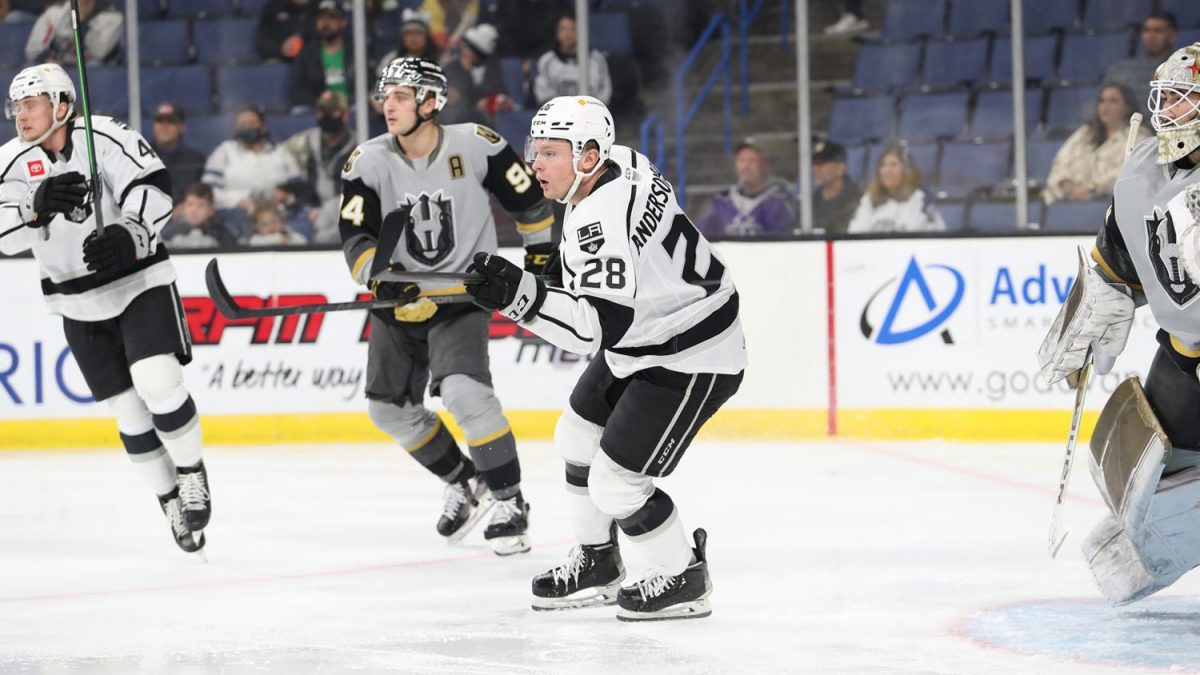 Forward Jaret Anderson-Dolan had the only goal for Ontario in the loss, breaking up a shutout bid by Henderson goaltender Jiri Patera just before the final buzzer. Goaltender Garret Sparks got the start and made 26 saves for the Reign.

Henderson got out in front at 15:14 of the first during a delayed penalty to Ontario on a deflection by Jake Leschyshyn from the low slot that got past Sparks to make it 1-0.

The Silver Knights added to their lead at 9:16 of the second when Connor Corcoran scored during a power play opportunity. Henderson finished 1-for-3 on the man-advantage in the contest, while Ontario ended at 0-for-3.

Before the end of the middle frame, the score was pushed to 4-0 on Henderson goals by Ben Jones and Pavel Dorofeyev at 13:14 and 15:21 respectively.

The Reign had their most productive period in the third, firing 14 shots at the net, but were unable to beat Patera until less than two minutes remained in the game. Anderson-Dolan recorded his sixth marker of the season by putting home a rebound in front with assists from defender Austin Strand and forward Aidan Dudas.

Patera ended the game with 24 saves and was named the first star of the game for the Silver Knights, who outshot Ontario 30-25 in the game.

The Reign will open up the 2022 portion of their schedule on Sunday afternoon when they host the Bakersfield Condors at Toyota Arena, beginning at 3 p.m.

Chris Hajt
Initial thoughts on the loss for his team
Ultimately, we didn’t have a great game tonight. Didn’t take care of the puck enough, and too many turnovers they were able to capitalize on. They checked well, and again we just didn’t manage the puck well and didn’t have a good enough game to win.

On if playing with 11 forwards had any impact on the team’s performance
The guys that were in the lineup, no matter who’s in we expect them to compete and to play well and we just didn’t have enough players going tonight so regardless of if there’s 11 and seven or 12 and six or whatnot, the expectation is there that the effort is there and we play well.

On if it helps the team’s momentum moving forward to avoid a shutout
You can definitely build on it. We talked about shooting the puck in the third period and throughout the game, and how important it is when you look up at the clock and you have nine shots and the second period is almost done. That’s unacceptable, and we need to be able to shoot pucks more. We have a lot of guys that can fire the biscuit and it was good that we scored a goal but we’re looking forward to building on it in practice tomorrow.