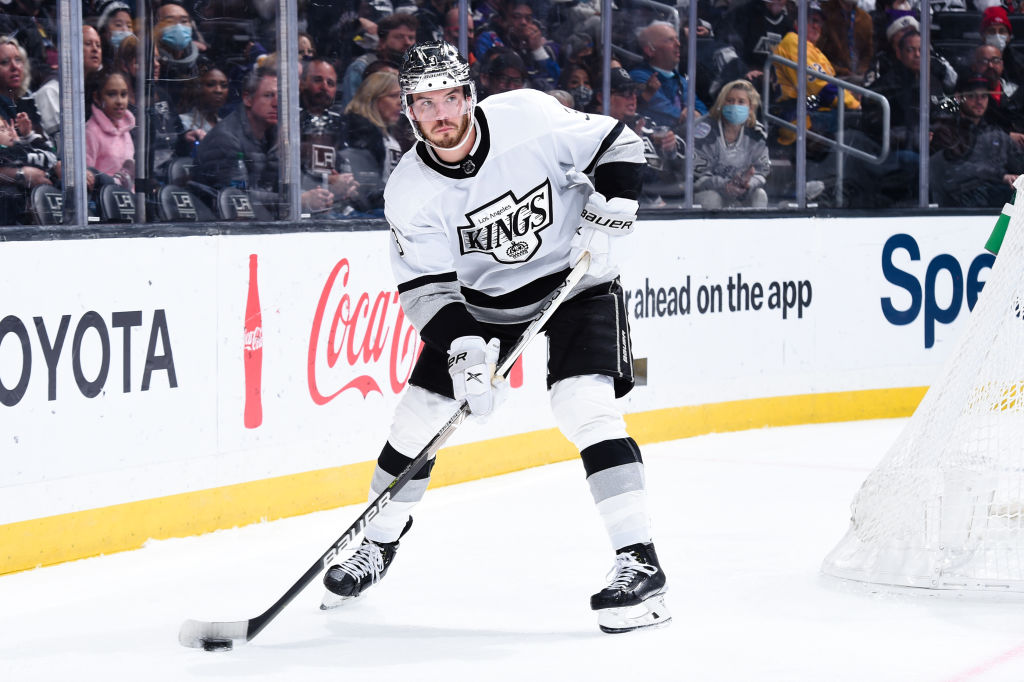 A quick report from today’s practice, as we close the book on 2021. Coming up later today, a look at 2021 as a whole, including some year-long totals that conveniently, for my mathematical needs, add up to two full seasons at this stage.

The Kings were on the ice this morning in El Segundo, with everyone accounted for. The team had 13 forwards, six defensemen and two goaltenders on the ice, which coincides with the team’s roster at this time. The Kings assigned forward Vladimir Tkachev and defenseman Jacob Moverare to AHL-Ontario earlier today, with both players expected to suit up this evening for the Reign, who are home at 7 PM.

That left the Kings with last night’s lineup, plus Lias Andersson, on the ice for practice today. For reference, here’s that alignment, which jives with what we saw earlier today.

Todd McLellan noted that Jonathan Quick will play tomorrow against Philadelphia, as the team continues to ramp up Cal Petersen’s workload. Following the game versus the Flyers, the Kings don’t play again until January 5 versus Nashville, giving Petersen plenty of practice time to get back into the flow.

“The thought process behind going with Quickie is that, in this situation, you play a game and then have four days to really ramp up Cal’s play. He pre-game skated yesterday for a little bit and today’s practice didn’t do a lot for him, we have to look at the group as a whole. He’ll get some good practices next week and he’ll be ready to go, and we need him to be better, he knows that.”

Practice Flow and Anze Kop
Considering the schedule the team is in right now, the Kings held a relatively short skate today, though with a noted focus on certain details and certain areas. The Kings have played every other day over the last week, continuing tomorrow against Philadelphia. Practices in between games have a focus on selected details, done quickly and efficiently, and the team gets off.

Looking at last night’s game, Anze Kopitar played more than 26 minutes, a season-high, including 2:49 over the five minutes played in overtime. The contest versus Vancouver game saw some imbalanced minutes, especially when considering the close game and Phillip Danault just getting back into action out of COVID Protocol.

“[Kopitar] is one of the top players in the National Hockey League, and they’re all playing those minutes,” Todd McLellan said today. “We’re trying to win games right now and he’s going to continue to play those minutes. That’s why we have practices like we did today. For those high-minute guys, it was just a clean out, maintenance day. The lower minute guys stayed out to do a little bit extra.”

McLellan went on to discuss Kopitar’s ice time a bit more in-depthly. Obviously, over the course of 82 games, 26 minutes a night is likely unsustainable, because of the high workload it places on Kopitar each and every game. McLellan talked about Phillip Danault as a big reason why he feels the Kings can at least keep Kopitar’s minutes manageable and in the long run, keep him fresher over the course of 82 games.

“I look at the number of shifts that each of them play and Kopi has an engine that allows him to play 10 seconds longer in a shift than a lot of others do,” McLellan said. “Especially if we’re in the o-zone, or the opportunity exists maybe for some offense, he’ll stay out there for those 10 seconds and I’m okay with that, because he’s capable of managing himself, he doesn’t waste a lot of energy.”

That disparity, while larger last night, is a season-long trend, with Kopitar at 51 seconds per shift, longest amongst forwards, and Danault at 43, towards the bottom. In terms of shifts per game though, the pair are almost identical, at 25.2 for Kopitar and 25.1 for Danault.

“If Kopi had 35 shifts, and Danault had 12, then I think we’re mismanaging it, but if their shifts, especially 5-on-5, are generally pretty even, then that’s the individual that feels good and chooses to stay out a little bit longer,” McLellan expanded. “Phil, on the other hand last night, in his first game back, he was going a little bit shorter, I knew that was going to happen, therefore, there’s a little bit of a disparity between them.”

Roy-al Standards
Which LA Kings defenseman ranks in the Top 10 in the NHL in assists since November 30? The under the radar, but ever effective, Matt Roy of course!

Since November 30, the shootout loss against Anaheim, Roy has collected eight assists from 12 games played, to go along with a +9 rating in that time. Roy’s time has consisted of several different defensive partners, and different roles, with Drew Doughty and Alex Edler both in and out for a portion of that span. Roy has also done this without a ton of power-play minutes, as his seven even-strength points are tied for fourth in the league in that time.

“Maybe I’m just trying to be more aggressive, but at the end of the day, my teammates are scoring,” Roy said. “Without them bearing down and getting the goals, I don’t have those assists, so I think it’s just a combination of my teammates scoring and just getting the bounces.”

Being more aggressive is something that Head Coach Todd McLellan has noticed in Roy’s game as well, both in his offensive mentality and his willingness to shoot the puck. Since November 30, Roy has 38 shots on goal, the third-most in the NHL, trailing only Roman Josi and Dougie Hamilton.

We’re seeing it in all situations too. While 3-on-3 overtime has trended more towards puck possession, Roy wasn’t afraid to let it rip twice when he felt he had a good look, once on a wrist shot from the slot and the second a one-timer from the left-hand circle. The coaching staff has taken notice as of late.

“I think we’re seeing a little bit more aggressive offense from him, mentality of shooting the puck and having confidence doing that……He’s not afraid to shoot the puck, I think he’s got 85 shots on goals right now, that’s a big number for a defenseman,” McLellan said. “We want him to continue to do that and we want that to rub off on some others.”

With the multiple extended absences for Doughty and Sean Walker and Alex Edler out long term, Roy has been the constant for the Kings on the backend.

He’s taken it upon himself to raise the level of his own play, not just offensively, but in all areas of the ice.

“I hope my teammates look at me differently from last year to this year, I hope they lean on me more,’ he said today. “I think, with all of the injuries, it’s just a matter of somebody stepping up and I feel a responsibility in doing that. I’m just trying to elevate my game to another level, compete every night and give my teammates a chance.”

Turcotte, Take 2
Lastly, McLellan gave us his evaluation of Alex Turcotte after his second NHL game.

“Better – He started to give himself permission to belong here, and what I mean by that is, sometimes you’ve got to play a few games and then you realize, this is for me. You play less apprehensive, less afraid of making a mistake. I thought, physically, he was more impressive in game two, came very close to scoring his first goal, was fine in the [faceoff] circle. He’s exactly what we thought he would be and he’s just going to get better as time goes on.”

Kings are scheduled to hit the ice tomorrow at 10:30 AM for morning skate in El Segundo, before they ring in the new year at 7:30 PM against the Philadelphia Flyers on home ice!