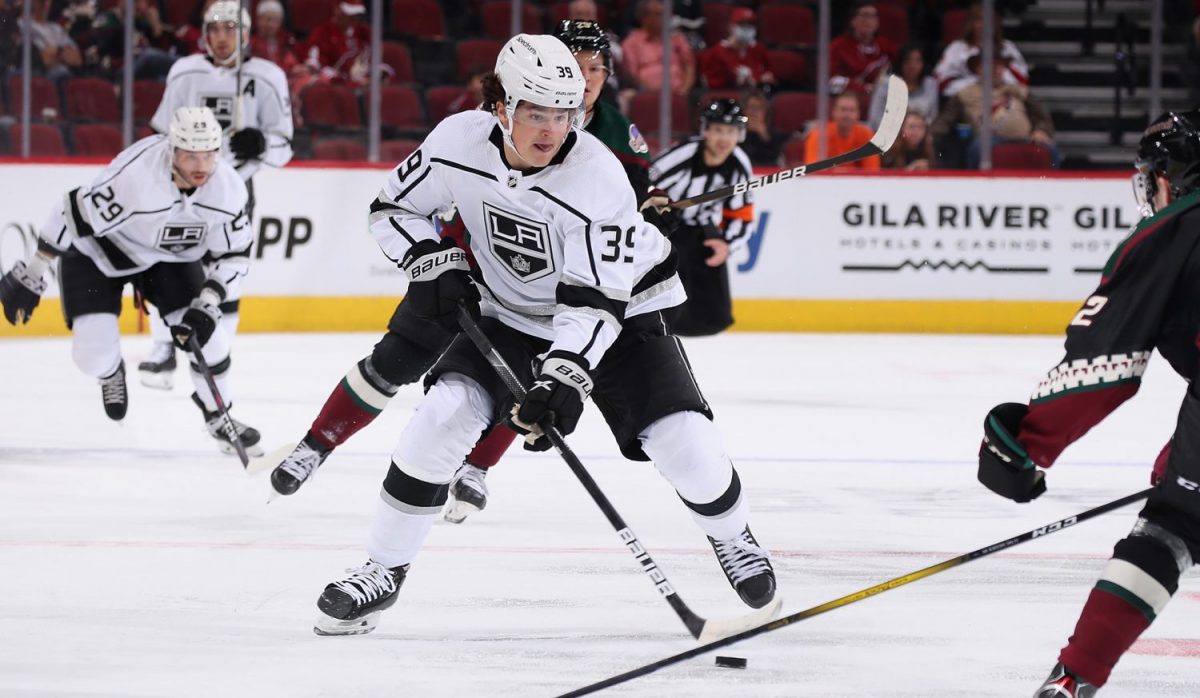 As officially official as we can say things are right now, forward Alex Turcotte is expected to make his NHL debut this evening against the Vegas Golden Knights. The moment is one that Turcotte has waited his entire life for, and one that would have likely come sooner had an injury not derailed a callup set for earlier this season.

“I’m pretty excited, it’s a dream come true, it’s something I’ve been looking forward to since I was a little kid,” Turcotte said, earlier this morning. “I’ve worked really hard, but I’m really thankful for my family for helping me get to this point, a lot of the reason I’m here is because of them, so this night is for them as well. I’m just really looking forward to getting out there.”

Turcotte has skated in 50 AHL games over this season and last, collecting 31 points (9-22-31) in that span. He has three goals and seven assists from 18 games played early in the 2021-22 campaign. It’s easy to forget that we’re still talking about a 20-year-old player here, who under different circumstances might just be making his professional debut this season, let alone his NHL debut. And, in another totally different set of circumstances, could already be playing regularly at this level.

While expectations are sometimes stocked highly upon a top-five draft pick, every player has their own development arc. Turcotte’s is different than Arthur Kaliyev or Tobias Bjornfot, selected in the same draft class. Players are ready at different times and that’s important to keep in mind, both when evaluating Turcotte’s first game, and when considering his path to get here.

As he gets set to play this evening, the message from Todd McLellan was simple. Go out there and play.

McLellan said that Turcotte won’t be expected to be perfect in his first game, nor should he feel that he needs to be. Mistakes are fine, as long as he’s receptive to feedback and gets better from them. Such is expected from a player making his NHL debut. McLellan added that he doesn’t like to meet with a young player prior to his debut, typically, to avoid putting anything else in his head. That was the case here with Turcotte.

“Talking about Turc, he’s scheduled to play tonight, but the way things have unfolded, he’s known that for two or three days now,” McLellan said. “Especially with the COVID reductions in lineups, we were already at the bare minimum. He’s had two good practices, he’s been in the organization long enough to know how we want to play and now it’s just playing. I think, sometimes, if I go meet with those individuals prior to a game, I get them wound up even more. He doesn’t have to be perfect, he just has to play his game. In fact, if he makes a few mistakes, we’ll help him and he’ll feel better about improving as he goes forward. I tend to leave them alone, there’s enough going through their head with phone calls and texts, who’s watching, who isn’t, that they don’t need me convoluting it even more.”

You hear “play his game” pretty much any time a younger player comes up from the minor leagues to play at the NHL level.

With regards to Turcotte, the words aggressive, tenacious and hard-working are typically thrown around and attached to his name. In his own words, he described his own style as one that is meant to generate “havoc” in all areas of the ice, and to capitalize on that havoc for his team’s benefit. We’ve seen that from Turcotte with AHL-Ontario and his goal going into tonight is to play his style of hockey here in the NHL as well.

“My game is to play fast, create havoc and make plays with that, play a 200-foot game,” Turcotte said. “That’s what I’m going to try and do out there, I’m not going to try and be somebody that I’m not. I’m just going to work hard and do what I can to help the team.”

As he prepares for game number one, Turcotte confirmed that several family and friends will be in attendance tonight. He knows he’ll have some butterflies at times leading up to and maybe early on during the game, but he feels rested, prepared and ready to go tonight.

“I actually slept pretty good,” Turcotte said, heading into today’s game. “I think the last two days of practice have really helped, just being out with the team and getting a feel for how practices go, how they run. I think that was huge for me. Obviously, there’s going to be nerves, I’m anxious, but at the same time, it’s still hockey and I know what I’m capable of doing. I’m just going to have fun and do my best.”

Turcotte on being comfortable at this level and his mindset for tonight
Just being out there, practicing with [the Kings], I know I can play at this level and play my game. I think, for tonight, I’m just trying to have fun, keep it simple and work hard, not try to do too much. Just try to make smart plays and take it from there.

Turcotte on the differences he’s noticed between the AHL and the NHL
There’s great players at both levels, obviously, and the AHL’s a great league. Practicing with those guys, they’re very high-end practices, but I think just the pace is different in the NHL for sure. Everyone is so good, and the way that practices are run it’s pretty quick. It’s been fun and I’m just trying to soak it all in and enjoy it.

Todd McLellan on what he and the Kings want to see out of Turcotte
We want to see growth. We know where he was coming out of training camp, which was close to being a full-time NHL’er. He’s gone to the American League now, and of course their season is disrupted somewhat and he’s fought through some injuries, but when he’s been able to play, his game’s been a very consistent, two-way game. He’s a player that is an energy type player, he’s involved in everything. He strips a lot of pucks, creates turnovers for his teammates and we’ll be looking for that. How is he defensively, is he able to read things quicker and close things quicker, but by all indications, through Chris Hajt, his play there has been deserving of his recall at this point.

Ontario Reign Head Coach John Wroblewski on Turcotte, from earlier this season
Alex is ultimately the type of player that is going to be just the consummate teammate. I think he’s looked for reassurance before, today I just saw a guy really comfortable in his skin. He knows he’s a leader out there, his game looks amazing by the way, you can see the differences in the body type and the confidence level and the shot, like how it explodes off his stick just a little bit crisper. It’s earned confidence, that’s a term that I try to roll with, with these guys like you can’t have hubris, you can’t be cocky, but if you’ve earned it, then own it. Whether or not he cracks the Kings this year, I’m not sure it’s going to determine his career. I think that he’s in a spot where – some of these guys that are like 6-foot-3, 6-foot-4 that were drafted in his class, some of the guys that are maybe a little bit better on the periphery on the outside, the game doesn’t change as much for those guys. When you navigate in the trenches like Alex does, when your job is to be at the net front, in the corners and win puck battles, especially out here in the west, every defenseman is 6-foot-3, 6-foot-4, they’ll grab on, they’ll hold. So his navigation process has changed and had to evolve differently from the guys that were in his draft class. And I see somebody who seems like he’s only more determined instead of saying ‘why not me in the NHL’, he’s saying, ‘I’ll get there if I earn it’.

Game Preview to follow in a couple of hours!