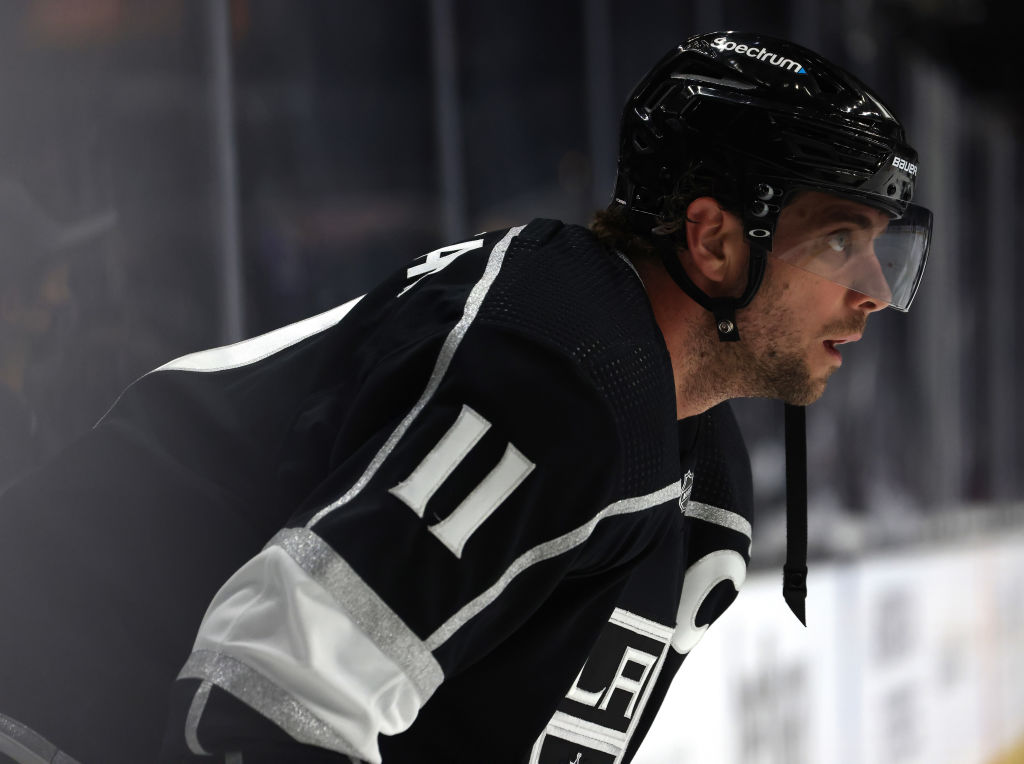 Back at 11 AM, that is, giving me the chance to keep that opening line the same from yesterday’s post. Following yesterday afternoon’s skate, the Kings returned to the ice at 11 AM today, in their normal time slot. Normal……it’s anything but, really, but the sanctity of even getting back to our usual schedule was a nice feeling.

The Kings will take another step back towards normal tomorrow evening, when they host Vegas at 7:30 PM. Still some tickets available for tomorrow’s first game back, available here!

The Kings roster grew by two today, with defenseman Jacob Moverare re-joining the group and forward Martin Frk joining the NHL club for the first time since training camp. Both players are now on the taxi squad, bringing the total there to three players. With the Kings sitting at just 17 skaters on the active roster, and one on said taxi squad, at least a couple of moves were expected to provide some depth with the big club.

Those changes come via Moverare, who met the team on their recent road trip but did not play in a game, and Frk, a veteran of 118 NHL games, including 18 with the Kings. Moverare has been perhaps the steadiest, most consistent defensemen with AHL-Ontario this season, while Frk leads the team in scoring, tied for fourth in the AHL. Two good guys to bring up to bolster your options.

With that in mind, here’s how the Kings aligned this morning at Toyota Sports Performance Center –

With the options in front of us, at this time, all signs point towards Alex Turcotte making his NHL debut tomorrow evening against Vegas. Counting on anything at all more than 24 hours from now – heck, 24 minutes from now – would be foolish, but assuming all stays according to play, Todd McLellan called it a “good chance” Turcotte is in line to draw in tomorrow.

If Turcotte does draw in, it will likely be at the center position. Per McLellan, Turcotte has been on the verge of a recall in the past, merited by his play, until injuries got in the way. He’s earned his shot here today, though it’s important to remember that this is a 20-year-old player who has yet to play in an NHL game. He’s on his own development path, and it’s important to remember that regarding Turcotte, or any up and coming Kings prospect.

“The ‘get ripe time’ if you will varies from player to player and situation to situation,” McLellan said today, of Turcotte. “We could be talking about Alex Turcotte a lot more at the National League level if we hadn’t signed Phillip Danault, if Rasmus Kupari hadn’t played as well as he did earlier in the year. It’s great to have numerous prospects in your organization, but only so many of them can play at a given time. That doesn’t diminish Turc’s value, the type of career he may have. He’s getting the training he needs down below.”

Assuming all stays according to plan, we could see him in action as soon as tomorrow, an exciting sign for Kings fans.

Injury Updates
Regarding the five players in protocol, no update today on that group of five players. At this time, none are expected to be out of protocol in time for tomorrow’s game against Vegas. That list includes Dustin Brown, Quinton Byfield, Phillip Danault, Olli Maatta and Cal Petersen. By timelines only, Petersen and Danault figure to have a chance for Thursday’s game against Vancouver, though we wait and see on that front.

Regarding Andreas Athanasiou, however, McLellan was able to provide us with an update on his status. Athanasiou suffered a lower-body injury on December 14 in Tampa, during the third period, and did not return. Athanasiou has yet to skate with the team since and is ruled out at least for the next three games, though a door was left open for a potential return later on the current seven-game homestand.

“He didn’t skate the last two days, so I wouldn’t say he’s real close,” McLellan said. “On this homestand, maybe at the backend, but certainly from now into the early new year, I don’t see him in the lineup.”

Today’s Practice
Yesterday was the first practice for the Kings since December 15 and the first organized, on-ice event for the Kings since December 19. Naturally, there was some rust involved in that situation. As such, yesterday’s skate had more of a focus on movement, getting the Kings back to where they need to be, as opposed to anything detail-oriented towards preparing for the game against Vegas tomorrow.

Today’s skate was more aggressive and battle-oriented, with a focus on moving pucks up ice and beating pressure. McLellan noted that today was one where he and the coaching staff was aggressively pushing the team throughout the practice.

“We certainly did [focus on details], but quite frankly, it doesn’t change from any other day,” he said. “There’s no sense practicing just for the sake of practicing, we try to hold the players accountable on any day, but today was one where we were aggressively pushing the players to get them re-engaged and back to where they need to be. I think we’re about half a team in right now, we’re not enough, so we’ve got another 24 hours to get that in order and be ready to play.”

A lot of it starts with reestablishing expectations, which, despite the time off, will continue to be high for the Kings. As they continue to work back into action after the time away, adjustment paints, if you will, are to be expected, though with an important two points on the line tomorrow, the time to make sure that everyone is firing on all cylinders is short.

“I think the first thing is that all teams have gone through this,” McLellan said. “We’re pushing for perfection early in practice, and we want to see it in the games, but there’s going to be some frustration, some timing, the rhythm of the game has been put aside for a week, so it’s going to take a while. We want to see clear heads, we want to see guys at least attempting to execute the proper way. I think we can get there really quick if we get engaged the right way, and we have a good half to three-quarters of the team that’s there. We need six or seven more players to get sharp and we should be fine.”

Father CHRIS-tmas
Joining the Kings coaching staff on the ice today was Ontario assistant coach Chris Hajt. Hajt, along with assistant coach Craig Johnson, have stepped into larger roles with the Reign so far this season and with both Trent Yawney and Marco Sturm currently in protocol, Hajt is expected to take on a role with the NHL Staff as well, beginning tomorrow against Vegas.

Hajt has been responsible predominantly for the defensemen during his time with the Kings organization, which has spanned two separate tenures between 2014 and now, sandwiched around time as an NHL assistant with the Buffalo Sabres. Of the six defensemen currently on the active roster, Hajt has coached five of them in the AHL, with only Drew Doughty outside of that group. That makes six of seven if you count Moverare on the taxi squad.

Having that level of familiarity is a big positive for the Kings, as Hajt potentially steps back behind an NHL bench tomorrow.

“That’s very helpful,” McLellan said today, of those existing relationships. “He has a relationship with them, he knows their demeanor on the bench and on the ice. He’ll be able to judge their emotional level throughout the night and obviously they understand his language, he’s done a real good job with developing those [players].”

For Hajt, being behind an NHL bench won’t be a new experience, though it would make his first time doing so with this organization. Hajt served as an assistant coach with the Buffalo Sabres for two seasons, from 2017-19, earning himself a promotion after three successful years in the AHL with Ontario.

Hajt has earned the respect and trust of McLellan through their time working together, and seeing him now progress to the NHL bench, for a short time, is a nice reward for the 43-year-old.

“I feel real comfortable with him joining, I think it’s great for him and it’s great for our organization that he can be a part of it,” McLellan said. “Once we do get healthy with the coaching staff he’ll be able to take his experience back down to the American League and as he’s coaching there, it should be even more powerful.”

Captain Kop
Lastly, hear from forward Anze Kopitar, speaking for the first time since the team returned to the ice following the holiday break. Kopitar touched on coming back off the break, skating again on a line with forward Alex Iafallo, an upcoming stretch of games at home and his experience playing at the Olympics, on the back of news that the league will not be participating this season.

Kings and Golden Knights, scheduled for tomorrow – See You There?