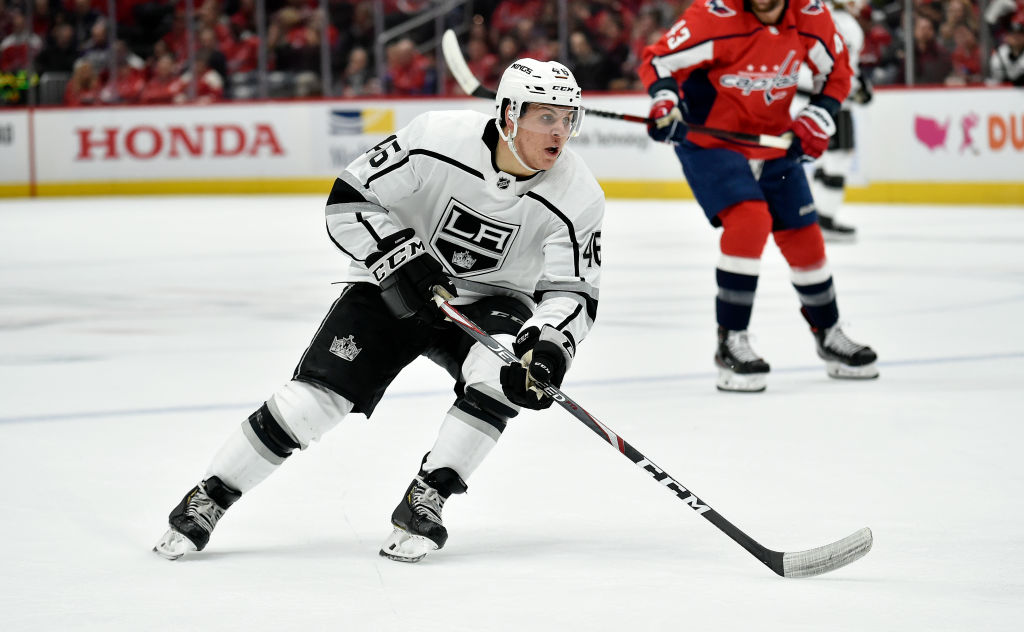 TONIGHT’S MATCHUP: The Kings conclude a four-game roadtrip this evening in Washington, as they visit the league-leading Capitals to conclude the season series between the two teams.

HEAD-TO-HEAD: The Kings and Capitals squared off once earlier this season, a 2-0 Washington victory at STAPLES Center. Washington has now won five consecutive games against the Kings, dating back to the 2018-19 season. Forward Garnet Hathaway, who returned to the ice this morning out of COVID Protocol, scored both goals that night for the Capitals.

KINGS VITALS: The Kings have reached the end of a gauntlet of games away from home, entering tonight’s action with a 1-1-1 record. Looking at the trip as a whole, the Kings have faced three of the NHL’s top seven teams, albeit somewhat depleted at the moment, with a fourth of those teams on the horizon this evening in the District of Columbia.

The team has faced different challenges than expected. Naturally, even without players, each of the four opponents on the trip are challenging teams. The Kings were disappointed with their performance yesterday in Carolina, though Tuesday’s output in Tampa Bay might’ve deserved the full two points. Tonight’s game represents a final opportunity to finish the trip with a winning record.

Considering the back-to-back, the Kings did not hold a morning skate in advance of tonight’s game. Entering the weekend, we naturally would have expected to see a split between Jonathan Quick and Cal Petersen against Carolina and Washington. Petersen’s addition to COVID Protocol yesterday, however, complicates that matter.

Quick was backed up yesterday by goaltender Jacob Ingham, who was recalled conveniently enough from ECHL-Greenville. Goaltender Garret Sparks met the team here in Washington, arriving from AHL-Ontario last night, with the expectation that he will partner with Quick as a tandem with Petersen out of action and Ingham now assigned to the Reign.

Sparks, tonight’s expected starter, has not played an NHL game this season, spending the campaign thus far with the AHL’s Ontario Reign. Sparks has posted a 4-3-0 record so far this season with Ontario, to go along with a .894 save percentage and a 3.23 goals against average. Sparks has faced 22 teams throughout his NHL career, though he has not taken on Washington. As an NHL goaltender, Sparks is 14-18-2, with a .897 save percentage and a 3.10 goals-against average.

“Sparksy has a bit of a track record in the league and there’s guys that are aware of him,” Todd McLellan said this morning. “Trevor Moore and some of the others that have played with him, he had a pretty good exhibition game in Utah. We’re not putting a kid in there that hasn’t had the experience. This is what we signed him for and it’s a great opportunity for him.

Quick hasn’t started both games of a back-to-back set yet this season, and hasn’t done so at all since January 18 and 19 of the 2017-18 season, a pair of low-scoring losses. The last time he did so in two road cities was March 19 and 20, during the 2016-17 season in Calgary and Edmonton, though he played just over 11 minutes in the first game. The last time Quick played a true, road back-to-back was during the 2015-16 season, when he started in both Vancouver and Edmonton on December 28 and 29.

In terms of the skaters, the Kings will need to make at least one roster move, with Phillip Danault entering into COVID Protocol. The team has the option of inserting defenseman Jacob Moverare on the backend and forward Lias Andersson up front, with Andersson’s position and experience making him the more likely option. Moverare joined the team yesterday from AHL-Ontario and took warmups, while Andersson has been waiting for his opportunity to check back in, after he last played on December 6 in Vancouver.

For reference, here’s how the Kings lined up yesterday in Carolina –

CAPITALS VITALS: Washington enters tonight’s action with a 7-2-2 record from their last 11 games played, most recently including a 5-2 win over the Winnipeg Jets on Friday evening.

Washington expects to have both defenseman Trevor van Riemsdyk and forward Nic Dowd as options this evening. Both players recently returned from COVID protocol, but were unable to meet the requirements to travel to Canada, similar to the situation with Andreas Athanasiou before the Kings went to Edmonton earlier in the month. Forward Evgeni Kuznetsov is in COVID Protocol, and will not play this evening, while TJ Oshie also entered protocol today.

Coming off of an impressive 40-save effort in Winnipeg, goaltender Vitek Vanacek was the first goaltender off the ice this morning for the Capitals. Vanacek has yet to face the Kings during his NHL career, which has included 52 career games. The Czech netminder is 6-3-5 this season, with a .913 save percentage and a 2.47 goals-against average.

Per Tom Gulitti of NHL.com, here’s how the team lined up during morning skate earlier today –

Wilson and Hathaway out there, but not taking rushes.

Per Gulitti, Tom Wilson and Garnet Hathaway have not yet been ruled out for tonight as of this time, but the Capitals are still “determining” things as of this morning. As will likely be the case here for some time, we await several factors when forecasting potential lineups.

– The Kings are focusing on starting better tonight than they did yesterday in Carolina. Last night, the scoreboard read 2-0 against them before three of the four lines had even hit the ice. An early goal, a failed challenge for a high-stick, which I think we can all see could’ve easily gone the other way, and a power-play goal on the ensuing PP led to a 2-0 lead for the Hurricanes. All before we settled into our seats.

The Kings had a good stretch immediately after those goals, but couldn’t convert on a few higher-end chances. From all of those factors, a better start is needed tonight in Washington.

“We had about a 10-minute span after we went down 2-0 when we had opportunities and we didn’t take advantage of it,” McLellan said. “Their goalie made some tremendous saves and then they settled in, got to three and it made it tough. Last night’s start, it didn’t help us one bit. We were down 2-0 and we had one line on the ice and some penalty killers and that’s it. That’s a tough way to begin the game.”

– Tonight’s game, as every game this week has also been, includes its share of unknowns. The Danault news makes three straight games a player has entered protocol on the day of . In COVID times, understanding exactly who will play for you, or against you, can be unknown throughout the day. NHL teams are now testing daily, as the Kings did this morning. Results of those tests can naturally sway a lineup one way or the other.

For LA though, it’s about getting their play in order and not focusing as much on what other teams have at their disposal.

“We’ve got to get our house in order and play well [against a good team],” McLellan said. “I’m not sure it matters, maybe it does, who’s playing or doesn’t right now. Everything is uneasy. The kids coming up are all hungry to play, you get good games out of them, this is their chance.”

– Lastly, how about an Ontario Reign team, playing with one NHL-contracted defenseman, picking up three of a possible four points this weekend. The Reign suffered the losses of Jacob Moverare and Jordan Spence, with Christian Wolanin and Sean Durzi already up with the Kings. Markus Phillips was the lone blueliner on an NHL deal in the lineup, along with Cameron Gaunce, an AHL veteran, three players on PTO’s from the ECHL and forward Adam Johnson, who is a forward by trade.

“They all played within themselves, they have some composure, some physicality, some experience at the American League level,” Reign assistant coach Chris Hajt said. “They played hard, they blocked shots, they all contributed by just making plays and they were really solid for us with an effort that we needed. Markus and Gauncer were very solid with those guys making their debuts.”

Kings and Capitals coming up at 4 PM Pacific!