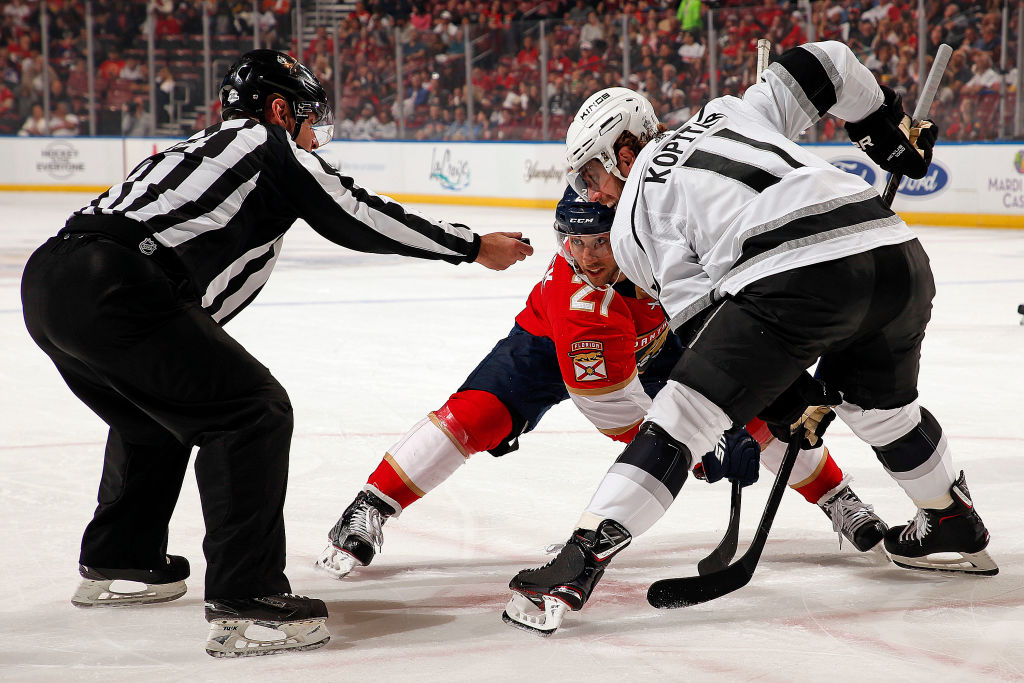 TONIGHT’S MATCHUP: The Kings continue their four-game road trip to the Southeastern corner of the United States this evening, with a game against the Florida Panthers on the docket.

HEAD-TO-HEAD: The Kings last faced Florida during the 2019-20 season, with each team winning their home game. Anze Kopitar led the Kings with five points (1-4-5) from the two games played, while Adrian Kempe, Alex Iafallo and Drew Doughty were all on the scoresheet in both games. Last season, Viktor Arvidsson played in Florida’s division and tallied five points (1-4-5) from eight games played.

KINGS VITALS: With one game down, the Kings are scheduled to continue on their four-game trip here later on today. As has been the case as of late, on days following a full-team practice, the Kings held an optional morning skate today in Florida.

As has been precedence over the last three games, Jonathan Quick did not skate during the optional, indicating he’s expected to start in goal. Tonight would mark his fourth consecutive start, with the veteran netminder posting a 2-0-1 record over the previous three. Throughout his NHL career, Quick has posted a 9-4-0 record against the Panthers, to accompany a .917 save percentage and a 2.40 goals-against average.

As noted yesterday, the Kings are expected to make at least two lineup changes for their game this evening. Defenseman Mikey Anderson (non-COVID related illness) and forward Blake Lizotte (COVID Protocol) are both expected to return this evening in Florida. Anderson missed just the one game, Tuesday’s OTL in Tampa Bay, while Lizotte hasn’t featured since the 3-2 defeat against Calgary back on December 2.

Expected to exit the lineup are Andreas Athanasiou and Christian Wolanin. Athanasiou suffered a lower-body injury during the third period on Tuesday and is not expected to return on the remainder of the road trip. Wolanin was the late insertion in place of Anderson and logged nearly 15 minutes, skating mostly on a pairing with Matt Roy. Wolanin is still with the team, just as the likely seventh defenseman this evening as of this time.

Considering the optional skate, we won’t know exactly how the Kings will line up this evening until closer to game time, and as we saw in Tampa Bay, it could be very close to game time. For reference though, here’s the alignment from yesterday’s practice –

PANTHERS VITALS: Florida enters tonight’s game coming off of their largest defeat of the season, an 8-2 setback against the Ottawa Senators on Tuesday at home. The Panthers have lost consecutive games, but are still one of the league’s top teams by record, with their 40 points good for fourth-most in the NHL.

Per David Dwork of WPLG Local 10 News, goaltender Sergei Bobrovsky was in the “starters net” this morning for Florida. If he gets the nod this evening, Bobrovsky would be in line for his 14th career appearance versus the Kings. The Russian netminder is 3-7-2 all-time, with a .903 save percentage and a 2.80 goals-against average.

Per Jameson Olive of the Panthers’ team website, today’s morning skate included 13 skaters and two goaltenders. Naturally, that does not compose a full lineup. Here’s how the Panthers lined up last time out against Ottawa, for reference –

Here's how the #FlaPanthers look in warmups:

The Panthers will be without forwards Sam Bennett, Ryan Lomberg and Carter Vergaeghe, as well as defensemen Radko Gudas and Brandon Montour. All five players were added to the NHL’s COVID Protocol by the team yesterday afternoon. As is always the case, a developing situation when it comes to COVID Protocol, and the Panthers will be expected to make some roster moves before the game this evening.

Preparing For Uncertainty
The world we’re living in right now is to prepare for the unexpected.

When it comes to any game this season, the Kings will ice the lineup of players that best gives them the chance to win, with who is or is not available. The same goes for tonight’s opponent in Florida. Now, as of this writing, the individuals available might be a bit fuller on the Kings side, but they have to be ready to faceoff against whatever lineup of players Florida dresses.

That could consist of some new faces, some players from AHL-Charlotte, but while it may seem unique, it’s not the first time this season the Kings have faced a scenario like that. You might say it favors the Kings, having NHL regulars unavailable to face them, and in some ways that is correct. On the other hand though, as we saw in a similar situation when the Kings were in Ottawa, that does not just automatically translate to an easy game on the road.

The Senators gave the Kings everything they could handle that night, and one bounce could have swung the result of the game. The Kings knew they’d get Ottawa’s best effort that night and they did. With the possibility of several, hungry players in the lineup, looking to impress in a potential showcase opportunity, you’ve got to be ready for that energy.

“Whoever is wearing the uniform is who’s going to play tonight and they’re all NHL quality players,” McLellan said. “If you’re playing in the NHL, you belong here, there’s no miracles or mistakes, so the quality of competition is going to be one that may be hungrier at times. The callups that arrive for the Kings, the Flames or the Panthers, whatever team it is, often they are hungry and they want to prove this is their opportunity. It makes for an intense, hungry game and opponent. We saw that in Ottawa, it was a difficult night to play that game. They checked really hard, they played well. Whether it’s us or any other team that plays short, we have to expect that from them.”

The list of players unavailable to the Panthers, as of this writing, is listed above. The Kings were at FLA Live Arena this morning to skate, preparing as they would for any other game. That’s the mindset for the team right now and that’s the mindset we’ll take here.

Speaking with team captain Anze Kopitar, he said that while he and the team are aware of everything that’s going on around them, it’s not something that they can allow themselves to worry about right now. You can certainly spin yourself in circles pondering all of the “what ifs”, but right now, it is what it is, and you go as you go.

“Obviously, we’re all aware of it, but at the same time you can’t think about it too much because you’re going to drive yourself crazy,’ Kopitar said. “You go as you go, obviously follow the protocols and try to stay safe essentially.”

We plan according to schedule and we see how it goes.

Back In Blake
All signs for this evening point to a return to the lineup for Blake Lizotte.

Lizotte was activated off of COVID Protocol by the Kings yesterday afternoon, after he skated with the team for the second time earlier in the day. It’s been five games away for Lizotte, who completed the recent seven-game homestand with the Kings on December 2, but was placed in protocol the morning the team was scheduled to depart for Edmonton for their next game. Lizotte has now missed out on five games in total and McLellan is hopeful that the “engine” is ready to go for Lizotte to be as effective as he can be.

“[Players] are out in different circumstances, with different levels, from zero effects at all to being in one and it varies all over,” McLellan said. “Blake has to play a certain way to be effective, and he knows that. It’s just whether the engine will allow him to do it and how sharp he’ll be, but we’re going to give him that opportunity.”

With Lizotte’s return comes the opportunity to reunite the line with him at center and Brendan Lemieux and Arthur Kaliyev on the wings. That line was effective for the Kings prior to Lizotte’s addition to COVID Protocol, with the hope that they can rekindle that success here tonight.

Together as a unit, the trio has scored six goals 5-on-5, as opposed to just three against. The line has controlled more than 54 percent of shot attempts while together and is exactly even in terms of scoring chances and high-danger chances. McLellan has spoken several times on how that unit has generated momentum for the Kings, in contrast to how the fourth line gave momentum back at times last season. The three players are likely to start the game together and we’ll see how things go from there.

“Lizzo right now is scheduled to play in the lineup, we have put that line back together for the start,” McLellan said. “It doesn’t mean it just automatically does what it did in the past – we’re hoping for that, but coming back off of a ten-day break, it’s going to be hard to get his wheels going again. We hope that they play with that energy and provide the spark that they provided for the group a couple weeks ago. If it’s not working, we have to be prepared to maybe move it around a little bit, but they will get the chance.”

All Kopasetic
Lastly, quotes from Anze Kopitar below on a few different subjects. The captain spoke on a variety of topics, including an overarching look at the first third of the season, the increased consistency and production of his linemate, Adrian Kempe, as well as the fine line with details between a one-goal win and a one-goal loss.

On the first third of the season
It’s fair to say it’s been very up and down the first third of the season. Winning the first game, losing six, winning seven, losing five, six again, just being up and down. Improvements can be done with consistency, but at the same time, the majority of the games are one-goal games, which is a good thing and a bad thing all at the same time. That comes with experience and putting yourself in that situation enough times when you can prevail on most nights.

On the difference between a one-goal win and a one-goal loss
It’s the little details. It’s killing off a penalty or scoring on a power play. I know it’s all cliché-ish, it’s what we always talk about, but that’s what it is. Sometimes, it takes winning a faceoff, a blocked shot, it’s that close. For maybe half of the games, we weren’t quite on our game, weren’t quite detailed enough and we paid the price for it.

On Adrian Kempe and his play so far this season
I think consistency with his play all over the ice. We all knew he was very fast, but I think he’s using his speed in different ways this year. He breaks up and makes a really nice defensive play and turns it into an offensive play, and that’s not necessarily just in the defensive zone, it’s getting a stick on a puck when they’re breaking out, turning it around and we can go right back in on the attack. I think, for him, this is his best season so far and he’s feeling confident, which is great to see. He’s been playing really well for us.