Moverare takes step into the spotlight for Ontario Reign 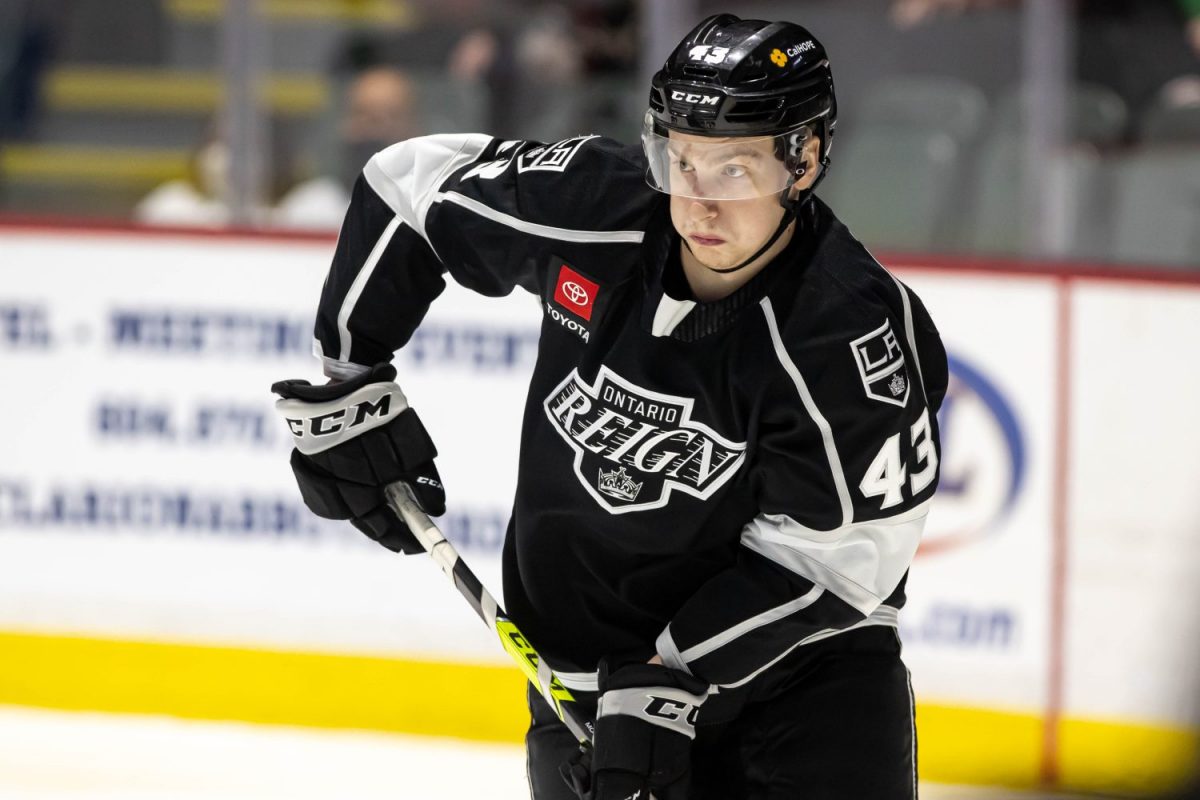 Roster shuffling has finally caught up to the Ontario Reign this week, who are faced with their first bump in the road after an excellent start to the 2021-22 season.

For the first two months of the campaign, Ontario had plenty of depth in all areas of its roster. When a player has earned a call-up to the Kings or injuries have arisen, whether on the NHL or AHL roster, the Reign have had a surplus of skaters to fill in. The depth helped Ontario get off to a hot start and put some distance between it and most Pacific Division opponents, apart from Stockton who is currently leading the pack. A 13-5-0-1 record has the Reign in second place with a points percentage of 0.711. But a 5-5-0 mark in their last 10 games over the past month has faded some of the shine from the hot start.

While the Reign still have plenty of forwards, the numbers on the back end have thinned out for a variety of reasons. One being the emergence of Sean Durzi, who earned a nightly spot in the Kings’ lineup with his offensive ability and poise on the power play.

Even better news for LA was seeing Drew Doughty return from injury on Nov. 30. Then the Kings welcomed Christian Wolanin back into the organization, claiming him off waivers after a brief stint with the Buffalo Sabres. But just two days after Wolanin returned, Kale Clague was headed in the other direction after being claimed off waivers by Montreal.

The same week, Cameron Gaunce, a veteran of 721 games in his pro career, suffered an injury on the team’s trip to Abbotsford and has since been out of the lineup.

Despite those obstacles, the Reign still had seven healthy defenders on the roster for last weekend’s home-and-home series with San Diego. But an unfortunate long-term injury to Alex Edler on Saturday meant Wolanin was headed back to the NHL, joining the Kings on their current road trip to the southeast. On Wednesday, rookie blueliner Helge Grans was loaned to Team Sweden for the 2022 World Junior Championships which run from Dec. 26 thru Jan. 5 in Alberta.

That leaves plenty of room for those remaining on the roster to step into a greater role as Ontario gets set for an important stretch of games. Someone who already has showcased the ability to play a shutdown defensive game while also facilitating offense is Jacob Moverare, who is in his second year with the club. Now, his presence will be even more important as the Reign look to continue playing winning hockey into 2022.

After appearing in 26 games during last season’s shortened campaign, the native of Östersund, Sweden has been in the lineup for every one of Ontario’s 19 games this year. While he’s shown improvement in his own game and become even more comfortable in the team’s locker room, Moverare has also taken on a mentorship role for the team’s two first-year blueliners, his fellow countryman Grans, as well as Jordan Spence.

Most recently, Moverare has been paired up with Spence, a 20-year-old who has played well early on this season but is still learning the league. The two have lined up next to each other in each of the Reign’s last nine games, dating back to a trip to Tucson a month ago. Moverare has also seen time with Grans, who, like Spence, has adjusted quickly.

Reign Assistant Coach Chris Hajt said the coaching staff has looked at both Moverare and Gaunce, when healthy, to help mentor the new members of the defensive corps.

“They both have an ability to play a two-way game, they’re responsible defensively and have some experience,” said Hajt. “Obviously Gaunce has played more games, but Moverare has a lot of experience at this level dating back to last year and has a two-way game where you can pair him with a young player. Their personalities have something to do with it too, they’re great leaders and they’re really great people that can guide our young defensemen.”

A former fourth-round selection in the 2016 NHL Draft by the Kings, Moverare spent two seasons in the Ontario Hockey League before turning pro with Frölunda in Sweden during the 2018-19 and 2019-20 years. He posted a goal and 14 assists for Ontario in the shortened 2020-21 year that began last February, but now the 23-year-old has continued his consistency into 2021-22 with eight points on three goals and five assists, along with a +6 rating.

“He’s played very well for us this year and last year,” Hajt said of Moverare. “He’s a really intelligent player, someone who uses his mindset, his ability to think the game, to really be solid for us in all different aspects. There’s a lot of deception in his game, he’s a very good defender with a great stick that has an offensive ability as well so we’ve leaned heavily on him and we will continue to do that.”

Hajt said the pairing of Moverare and Spence has been a good thing for the team over the last month as they’ve created offense but at the same time have been responsible in Ontario’s defensive zone. Now they’ll be even more important to the team’s results.

The solid all-around play has put Moverare closer to his first NHL opportunity. But if you ask him, he’s not thinking that far ahead and trying to stay humble.

“I just try to play with what I bring to the table and see how far that gets me,” Moverare said.

Moverare added that he’s felt good in his role this season and is always looking to take advantage of the minutes he gets but mentioned it’s never easy when the team must fill holes, especially due to an injury.

Hajt, who works closely with Ontario’s defensemen, had lots of praise for what Moverare has done on the ice and said he hopes it will lead to an opportunity at the next level down the road.

“His defending is really really good,” Hajt said. “He’s able to use his stick and his positioning. If he continues to improve his ability to close and end plays in his own zone and be really good in front of his own net, that can only help him against bigger, stronger, faster players which is what you see at the next level.”

The offensive part of Moverare’s game has also been effective, and it seems as if the pace of the game has slowed down for him. The goals he’s scored, like the one below on opening night, have all made use of extra time and space.

“I just think I’ve been a little lucky,” Moverare said of his extra offense. “I’ve either got some great passes or a good face-off that’s given me one or two extra seconds for the opportunity to make a better choice.”

That part of his game has also stood out to Hajt, who emphasized his deception being a key asset to keeping forecheckers at pay when looking to break out of the defensive end.

“He just has a lot of deception in his game and the ability to make a first pass,” Hajt said. “Every team wants that; every team needs defensemen that can move the puck out of the zone.”

The next few weeks won’t be a make-or-break type situation for Moverare as he’s already earned plenty of trust from his coaches, but if he’s able to handle the added responsibilities and continue to thrive, he’ll put himself in the spotlight as one of Ontario’s next prospects who could see an NHL call-up.

“He has a great work ethic and character so we’re lucky to have him,” said Hajt. “Hopefully down the road he gets an opportunity, but he’s focused on what he can do to help the Ontario Reign right now and how he can continue playing his best hockey.” 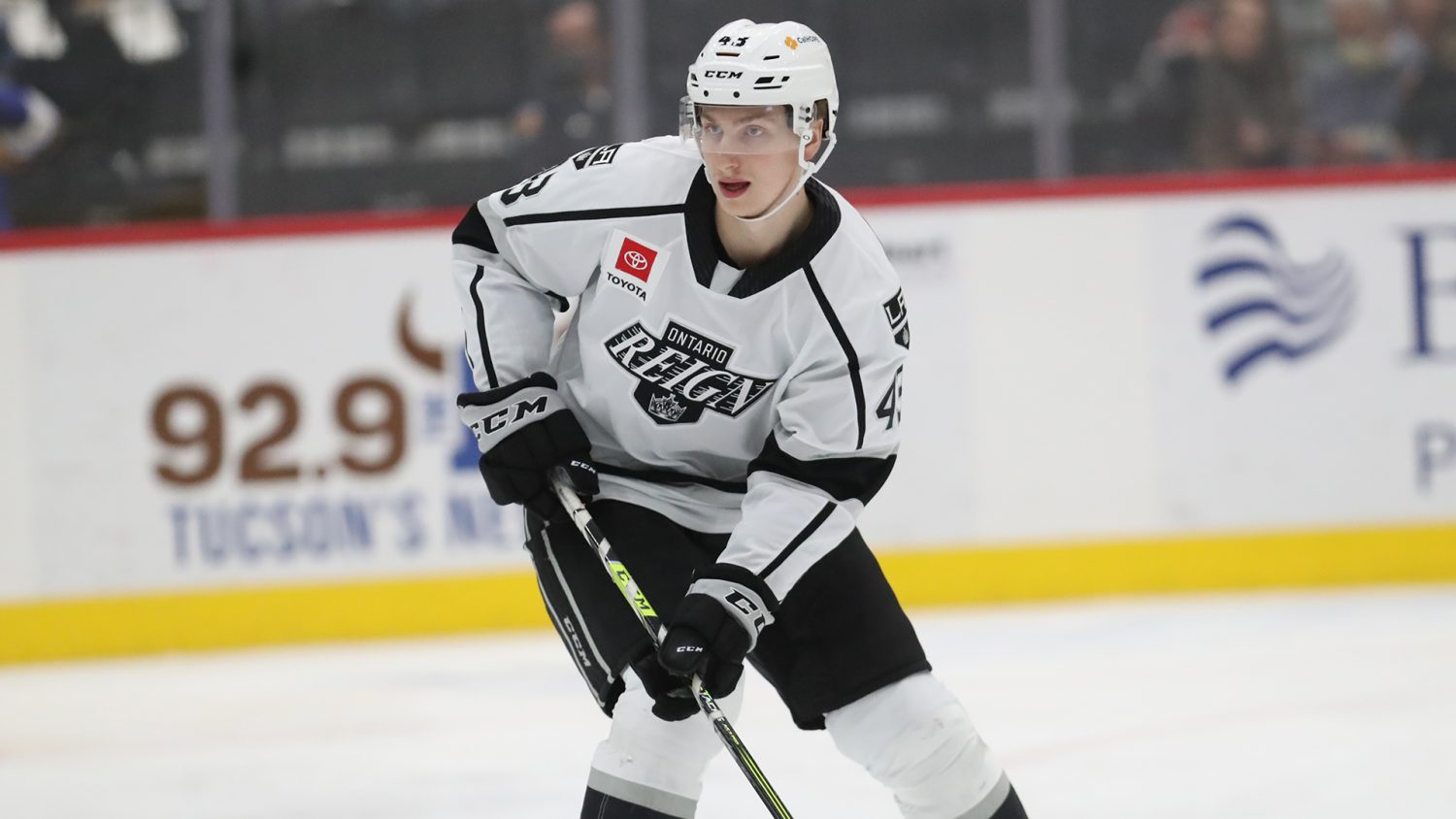