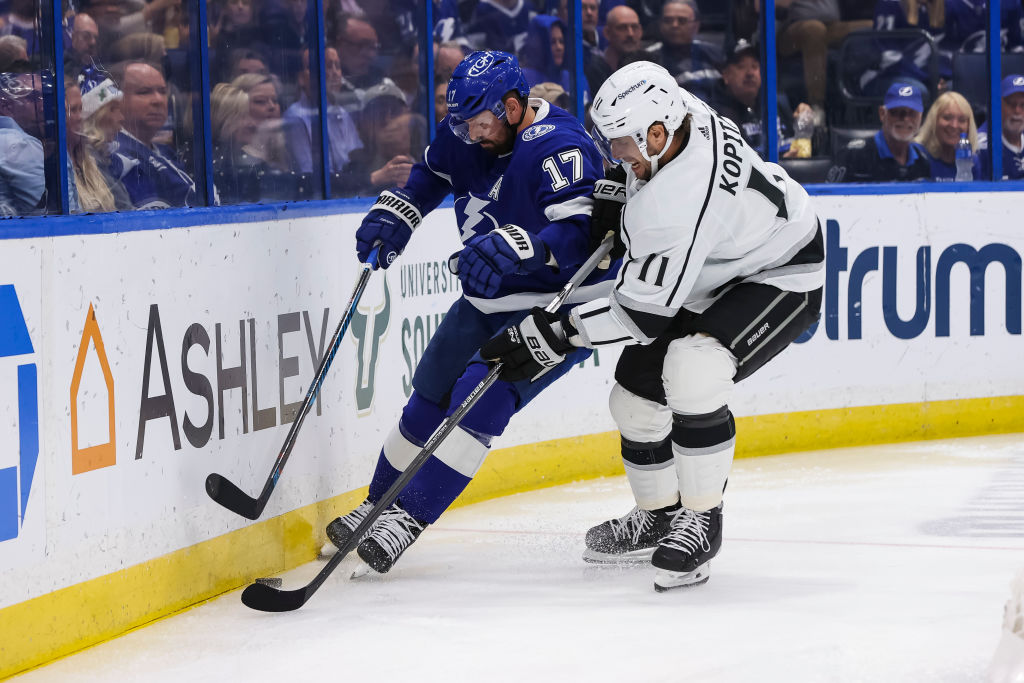 The LA Kings picked up a hard-earned point tonight but were unable to snag the second in a 3-2 overtime defeat against the Tampa Bay Lightning.

Defenseman Drew Doughty and forward Viktor Arvidsson each scored in tonight’s game. The Kings appeared to earn a power play in overtime, though the call wasn’t made, leading to an odd-man rush the other way, which resulted in the game-winning goal for the Lightning.

The Kings opened the scoring on the man advantage midway through the first period, as Doughty ripped home his third goal of the season from the slot. Anze Kopitar’s centering feed hit Alex Iafallo on the skate and ricocheted to Doughty, who walked in and wired a shot past Tampa Bay netminder Andrei Vasilevskiy to put the visitors on the board.

With a delayed penalty called against the Kings, the Lightning evened the score at one late in the second period, though if not for the goaltending of Quick, it could have been two. First, Steven Stamkos fed Victor Hedman for a one-timer in the right-hand circle, to tie the game. The Lightning nearly scored on another one-timer from a similar area, but Quick robbed Ondrej Palat with a glove save right at the end of the second to keep the game tied.

Less than a minute into the second period, the Kings took back the lead, through a redirected goal in front. Matt Roy sent his shot from the right point, which deflected off of a Tampa Bay stick, off Viktor Arvidsson’s back and in. The tally was Arvidsson’s sixth of the season, giving him nine points from his last nine games played.

The Lightning struck back with another goal in the back half of a period, as Taylor Raddysh tied the game at two just shy of five minutes left on the clock. Raddysh got a stick on Jan Rutta’s shot from the point, redirecting it low, past Quick, to tie the game once again. Raddysh’s goal was his fourth of the season.

After a back-and-forth overtime, the game ended following a non-call went against the Kings. Skating into the offensive zone, Arvidsson appeared to be tripped, forcing a turnover that went the other way. The result was the game-winning goal for the Lightning, buried by Mathieu Joseph, to give the hosts the two points this evening.

*Note that forward Andreas Athanasiou suffered a lower-body injury during the third period and was ruled out for the game.

On balancing tonight’s result versus the overall performance
I think you always have to look at the game as a whole. We came into the Stanley Cup champs building, we were pretty short on the backend and played a solid, 64 minutes and earned a point. Were there moments in the game where we’d like to be better? Of course there are, but on your best night you’re going to find that. Without sounding satisfied, because we’re not, we came for two points, it was a well-played, solid game by us.

On other defensemen stepping in with Anderson and Edler out
They did a really good job, minutes went up for just about everybody. Having Olli come back in, who has played in the NHL but he hasn’t been around us for a little while, a little bit nervous early but I think he settled in real well. Durzi continues to give us exactly what we need, night in and night out, and his confidence is growing and the rest of the group as well. The veteran group, and I include Olli in that, did their job.

On the pace of play tonight during overtime
It’s fast. You give them all that open ice and they go and that’s how they’re built and trained and we have that in our game too, it was going back and forth. There were a lot of times when a mistake is made at one end and it ends up being an opportunity at the other. That’s what we saw in overtime, it was pretty exciting.

On Arvidsson being taken down prior to the GWG, and a similar situation earlier
That’s what’s frustrating about our game, there’s the human element in it. Referees have a tough job to do, I get it, I make a ton of mistakes on the bench, but I would agree. I thought that Arvy was tripped, identically to what Kopi did to I think Corey Perry [at the end of the second period]. I don’t know if they missed it or what, there’s fewer players on the ice and he had the puck, but they didn’t see it the way we did.

– With his goal in the second period, forward Viktor Arvidsson has now collected nine points over his last nine games played (4-5-9).
– With the game-opening goal, defenseman Drew Doughty has 13 points (3-10-13) from 11 games played so far this season to lead all defensemen in scoring.
– Goaltender Jonathan Quick made 27 saves on 30 shots in tonight’s overtime loss. Quick has allowed three or fewer goals in 14 of his 16 starts so far this season.
– In his return to the Kings lineup, defenseman Olli Maatta logged 22:58, second-most on the blueline, while Christian Wolanin played 14:54 in his first game with the Kings this season.
– The Kings dropped their ninth consecutive game against Tampa Bay and their sixth consecutive game at Amalie Arena.

The Kings are scheduled to practice tomorrow afternoon at 1 PM at FLA Live Arena, home of the Florida Panthers.