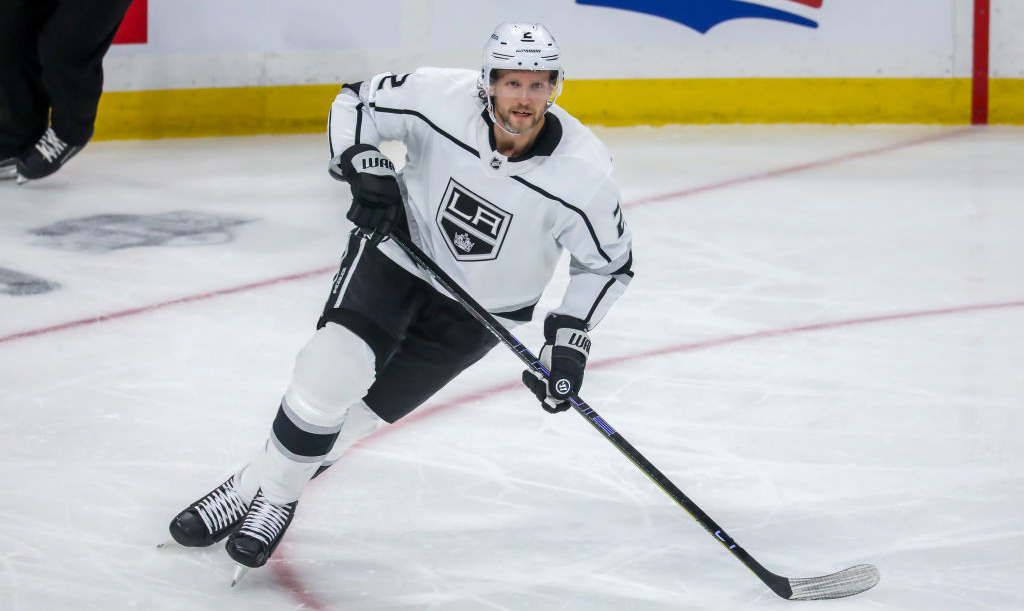 TONIGHT’S MATCHUP: The Kings conclude a quick, two-game trip to Canada with tonight’s game against the Vancouver Canucks.

HEAD-TO-HEAD: Similar to Edmonton and Calgary, the Kings did not face Vancouver last season, due to the temporary realignment of divisions for the 2020-21 campaign. The Canucks won all three meetings between the teams during the 2019-20 season and have won five straight versus the Kings dating back to 2018. Despite the defeats, Anze Kopitar tallied five points (1-4-5) from the three games, while Carl Grundstrom had two points (0-2-2) from two games played.

KINGS VITALS: The Kings are looking to make it four of a possible four points from their quick jaunt to Canada, as they visit Vancouver this evening.

The Kings did not hold a morning skate today, considering the back-to-back set, so we’ll have to wait until closer to puck drop for an official lineup. The team made one lineup change from Thursday’s game against Calgary to last night’s win over Edmonton, with forward TJ Tynan checking in for Blake Lizotte, who was added to the NHL’s COVID Protocol on Saturday. Tynan logged 9:44 in his Kings debut yesterday, centering a line with Arthur Kaliyev and Carl Grundstrom.

Jaret Anderson-Dolan, who was recalled along with Tynan, is the team’s other option at the forward position, while Olli Maatta is the team’s additional option on the blueline. Traditionally, we’ve seen the Kings keep things consistent following a victory, though injuries are always a factor, as is the back-to-back set, which could spur, or necessitate, a change.

Jonathan Quick was last night’s goaltender, impressing in a victorious effort. The back-to-back slate points towards Cal Petersen getting the nod tonight in Vancouver. Petersen brings a career record of 1-0-1 against the Canucks into tonight’s contest, with a .934 save percentage and a 2.02 goals-against average.

For reference, here’s how the team lined up yesterday against Edmonton –

CANUCKS VITALS: We certainly picked a good day to find some news on the Vancouver Canucks.

The Canucks have undergone several changes to both their coaching staff, as well their front office on the hockey operations front. The team announced that Bruce Boudreau will replace Travis Green as Head Coach, with Scott Walker joining Boudreau’s staff as an Assistant Coach, replacing Nolan Baumgartner. The team also announced that Jim Benning was also relieved of his duties last night, with Stan Smyl named Interim General Manager and Ryan Johnson named as the Interim Assistant GM.

While all newsworthy, none of the individuals mentioned above will play tonight against the Kings, so we’ll shift our attention there.

Thatcher Demko was the first goaltender off the ice tonight and if he gets the nod in goal tonight, he would be making his second career start against the Kings. Demko was victorious in his first game against LA, as he made 37 saves on 39 shots in a 3-2 shootout win in March 2019. On the season, Demko is 8-11-1 with a .908 save percentage and a 2.97 goals-against average.

In terms of the skaters, naturally last night’s news changes the individual selecting the lineup for tonight. Boudreau took his first morning skate with the team today and via Ben Kuzma of the Vancouver Province/Sun, here’s how the Canucks lined up this morning for Boudreau’s first skate –

Naturally, the state of the Canucks is a developing situation, one that could have additional details emerge throughout the day. From a Kings purpose, however, all that matters is tonight’s game, which will naturally be the main focus here.

Home Sweet Homecoming
It kind of feels like déjà vu here for the LA Kings.

Second half of a back-to-back and an offseason acquisition returning to the market where he spent a large portion of his professional career before signing to play in Los Angeles.

That player was Phillip Danault in November, with Montreal, and that player tonight is Alex Edler, with Vancouver.

Edler spent 15 seasons with the Canucks and ranked up more than 900 games played with the organization. He is the organization’s all-time leader in goals, assists and points by a defenseman, and ranks in the Top 10 in assists and goals amongst all skaters, regardless of position.

Edler recently joined myself and Jesse Cohen on the All The Kings Men podcast. Edler touched on a variety of topics, but we saved his return to Vancouver for the end, to touch on what will likely be a special night for both player and city.

“Of course I’ve thought about it, it’s the end of a back-to-back, so we’re in Edmonton the night before,” Edler said. “I don’t really know what to expect, it’s probably going to feel a bit weird to be on the other side of that building. I’m also looking forward to going back and hopefully it will be a good night.”

Listen to the full interview with Edler below –

Just How We Drew It Up
From one veteran defenseman to another, let’s take a look at Drew Doughty, now three games removed from injured reserve.

In terms of his tangible output, you wouldn’t think he missed a second. Doughty has four points (1-3-4) from three games played. Doughty was on the ice for nearly 28 minutes during his return to action, against Anaheim on Tuesday, and played more than 26 minutes yesterday against the Oilers.

Drew Doughty (1-2—3) recorded three-plus points in a game for the second time this season. Only Victor Hedman (3) has more such outings among defensemen in 2021-22.#NHLStats: https://t.co/E0Sv5wLNwn pic.twitter.com/ndqujaXIWP

One defenseman in the league has more three-point games than Doughty this season. Doughty has played seven games in total. Impressive, ain’t it?

“I feel really good,” Doughty said after last night’s game. “I think I played well in all three [games], not my best, but [Sunday] was for sure my best out of all of them. When we play those good, top players in the league, you get up for those games, and you’re going to do anything you can to shut them down as defensemen. I was really excited for this game today and happy with the way I’ve been playing.”

It certainly hasn’t taken Doughty long to re-claim his usual role, and with that the natural trust in all situations of the coaching staff. Not that there was any doubt he would do that.

Speaking with McLellan after yesterday’s game, he believes that Doughty is doing everything he needs to, and should be, doing at this stage. The Kings Head Coach had the following to say about Doughty after the win over Edmonton.

“He’s done exactly what he needs to do,” McLellan said. “I think with Drew, playing 27 minutes the first night, and the load just stays high, what we have to guard ourselves from is him beginning to pace himself, because he hasn’t played a lot for a long time. I thought he used his legs real well on the goal, and he can use his legs well in other areas, but that’s the byproduct of being out for a very long time and not playing a lot of minutes. You realize how hard it is again, and you pace yourself a little bit. Thank goodness we have him back.”

Kings and Canucks, slotted for tonight at 7 in Vancouver!