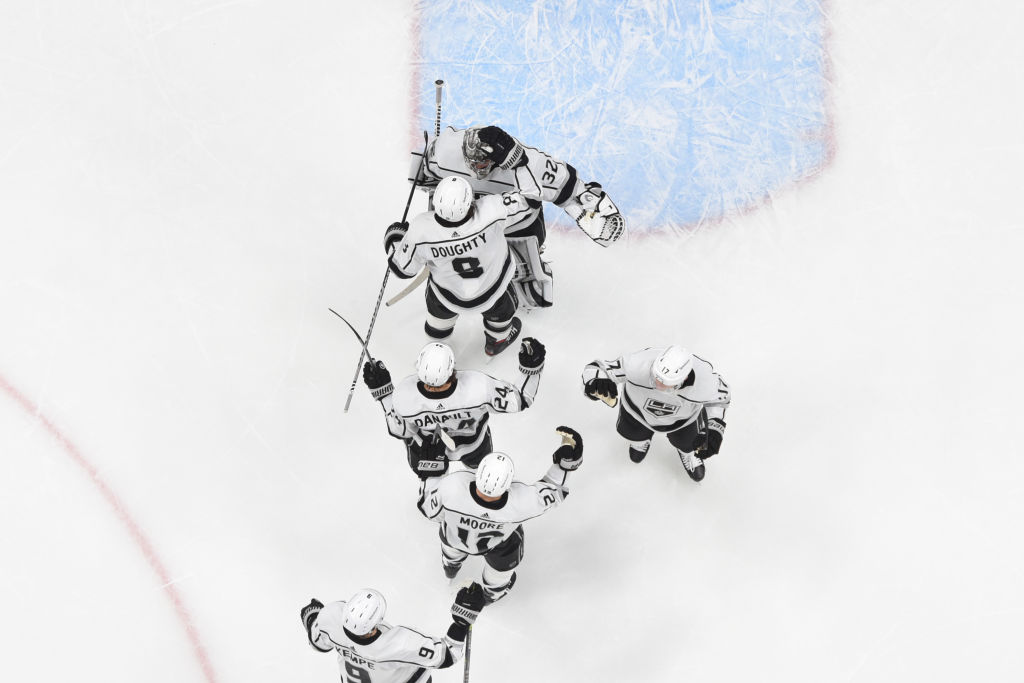 The LA Kings got back to winning ways, as they opened a short two-game trip to Canada with a 5-1 victory over the Edmonton Oilers.

The Kings scored three goals on the power play, all late in the third period, in tonight’s victory. The Kings got three points from defenseman Drew Doughty, and two goals from Adrian Kempe, to go along with a 21-save victory from Jonathan Quick.

The Kings opened the scoring on the evening, early in the first period, as Rasmus Kupari snapped a scoreless streak with the game’s first goal. Trevor Moore won a battle along the left-wing boards, creating space for himself, and he hit Kupari at the back post for a tap-in tally to put the visitors on the board.

LA doubled its advantage early in the second period, as Adrian Kempe buried his ninth goal of the season to put the Kings ahead 2-0. Kempe took a drop pass in the neutral zone from Dustin Brown, entered the offensive zone with speed and snapped a wrist shot clean past Mikko Koskinen.

Edmonton pulled a goal back midway through the middle stanza, as defenseman Darnell Nurse scored shorthanded. Ryan Nugent-Hopkins led a 3-on-2 rush, with the Kings on the man advantage, and fed Nurse down the left wing. Nurse shot top shelf from the left-hand circle for his first goal of the season and his team’s first goal of the evening.

After a third period that saw the Kings do their best to shutdown Edmonton, the visitors got a five-minute man advantage, after Connor McDavid was assessed a major penalty for boarding on Adrian Kempe, drawing blood from number nine in white in the process.

Hear from Doughty and Todd McLellan following the victory.

On the team’s third period in closing out tonight’s game
I think the other team kept us alert, just because of who they are and who they have. The way we were rolling lines, the bench was alert all the time and we check, check, check and the power play did what the power play needs to do at the end of the game.

On how well the Kings checked tonight against Edmonton
I don’t think you beat the Edmonton Oilers unless you check. You open it up and play a free-wheeling game, you’re not going to win. Checking and patience led to opportunities for us and we took advantage of a few of them.

On if he believes the three PPG’s can get the power play going overall
It was three different groups, because we got the two, and then when we went to lines, away from units, and played two defensemen, they scored a goal, which was good to see, but in those situations, the other team is kind of done. When the other’s team’s done, you need to hammer the nail in and at least our guys did that.

On keeping McDavid and Draisaitl off the board tonight
We tried to prepare for the team, but also for them. They obviously control a lot of offense. I was talking to one of the people I know well here before the game and you can almost start 1-0 or 2-0 for Edmonton at the beginning of the night, they’re that good. You’ve got to check and play them tight. Our team was fortunate, they did that tonight against those two individuals, but it’s not easy.

– Defenseman Drew Doughty tied a season-high with three points in tonight’s victory, his second such performance of the season. Only Victor Hedman (3) has more games with three or more points so far this season.
– Forward Adrian Kempe tied a season-high with two goals tonight. Kempe now has 10 goals on the season, the first Kings played to reach double-dights so far in the 2021-22 campaign.
– With an assist on Doughty’s third-period goal, forward Viktor Arvidsson extended his scoring streak to five games.
– Forward Trevor Moore collected his first multi-point game of the season with a goal and an assist in tonight’s victory.
– The Kings scored three power-play goals for the second time this season, and multiple power-play goals for the fourth time this season.
– The Kings have outshot or tied their opponents in shots on goal in 15 of the 23 games they’ve played so far this season, including tonight’s game.
– The Kings improved to 4-0-1 when playing in Canada this season.

The Kings are not scheduled to hold a morning skate tomorrow in Vancouver, in advance of tomorrow evening’s game versus the Canucks.