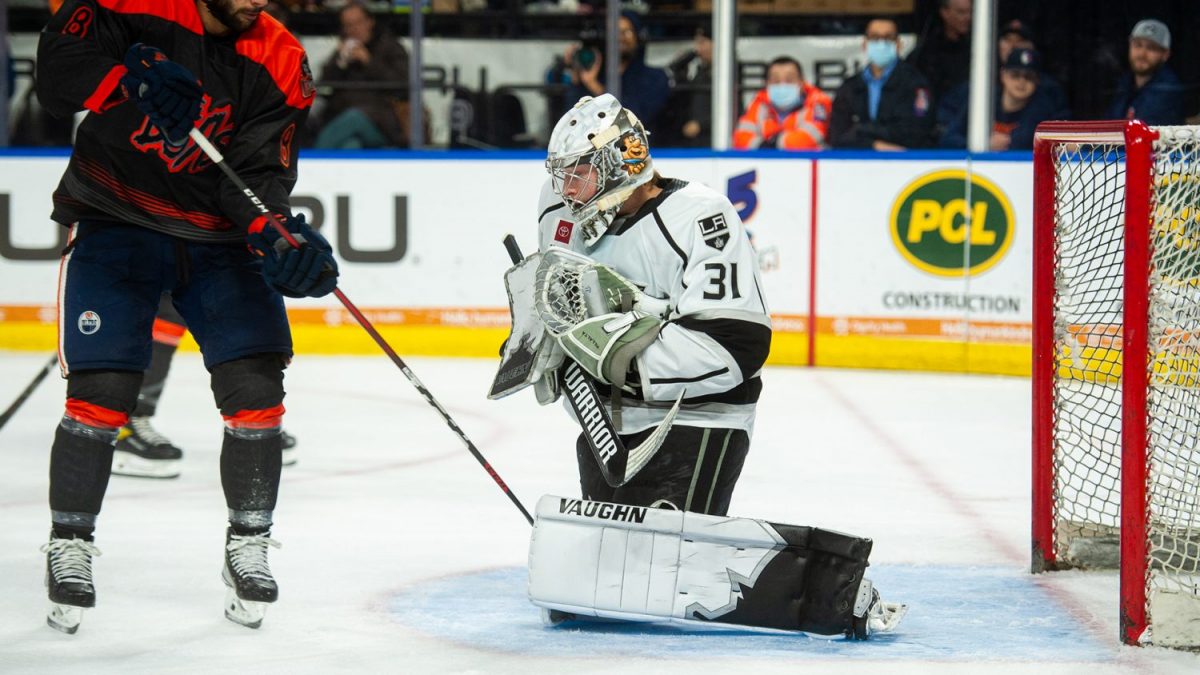 The Ontario Reign (12-4-0-1) prevailed in a shootout Saturday night to defeat the Bakersfield Condors (6-6-1-2) by a final score of 3-2 at the Mechanics Bank Arena. Forwards Vladimir Tkachev and Tyler Madden found the back of the net for Ontario, while Gabriel Vilardi netted the lone goal in the skill session.

Reign goaltender Matthew Villalta earned the win, making 28 saves in regulation and overtime before stopping all three of Bakersfield’s shooters in the shootout.

After a scoreless first period that saw Ontario come up short on two power play opportunities, the Reign capitalized on a man-advantage chance at the start of the second to take a 1-0 lead.

Akil Thomas won the face-off to begin the chance and Ontario worked the puck to the point, where Wolanin found Tkachev open on the right side. The Omsk, Russia native walked in and beat goaltender Olivier Rodrigue with a quick, well-placed wrist shot to the top right corner of the net.

The Reign held their one-goal lead into the third period where they extended the advantage on Madden’s sixth goal of the season at 4:30 from Vilardi and Jordan Spence.

But the Condors were able to come from behind and get back in the game, eventually forcing overtime. Seth Griffith cut the lead down to 2-1 at 8:08 of the third on the power play and Luke Esposito evened the score on a deflection less than four minutes later at 12:02.

Both clubs had multiple chances in the overtime period, but neither was able to find a winner, and the game headed into a shootout. Madden got the nod as Ontario’s first shooter but was stopped. Vilardi scored in round two and Vilalta turned aside Griffith to clinch the win for the Reign.

Ontario held a slim 29-28 shots on goal advantage in the contest. Each team converted once on the power play, with the Reign finishing 1-for-5 and Bakersfield ending at 1-for-4. Rodrigue stopped 32 shots in a losing effort for the Condors.

The two teams will meet once again on Tuesday night, also in Bakersfield at Mechanics Bank Arena. Puck drop is scheduled for 6:30 p.m.

Chris Hajt
On how it felt to get a win after two recent losses in Abbotsford
We had a lead, faced some adversity, but wanted to come out strong and we did. We were obviously down a forward and the guys stuck together and we were able to get the job done at the end of the day.

On what it was like on the bench with only three centers
The important thing is to keep shifts short. Again, when you’re minus a forward and guys are rotating in and out the communication and how important it is, who’s taking who, and again trying to keep your shifts as short as you can within reason is so important.

On the play of Matt Villalta in the win
You know what, Matty was just there for us tonight. He made the big saves when we needed it and he looked calm, he looked confident and we needed that game from him and he played excellent.

Christian Wolanin
On what the last few days have been like for him, coming back to the Kings/Reign
The last couple days were definitely a whirlwind. I guess it’s nice that I was coming back to familiar territory and I think the last month as a whole is just a really tough part of the business and obviously going through it is never fun but it’s part of the path that I’ve always been on. It’s always been a lot of adversity, a lot of ups and downs and I think that’s set me up well for what I just went through. But this is an awesome organization from the American League all the way up to the NHL and I was so excited to come back and the dream is to be an NHL player but they told me I was going to the American League and I couldn’t have been more excited to get reps with these coaches and this group of guys and hopefully get my game back to where it was after it being a month and a half off of playing hockey.

On how he felt in the game tonight
It felt great. I just love feeling trusted. I don’t love the way I played tonight, it felt like I hadn’t played in a month and a half, but that being said there was a lot of little things where I’m like ‘Okay, that’s fun, that’s what I can do when I’m playing well’. And then there was obviously other parts where I’m like ‘Oh man, that can’t happen.’ But it was just a lot of fun to be back and play meaningful minutes, just thankful to be back.

On joining the team’s power play and assisting on a goal
Both units have so much skill. In my unit specifically, we tried Burkie a couple times in the first period and then second period Vladdy said “try me this time”, and I’m thankful I did because he had a great shot to put it home.