“Keep It Simple” – An effective fourth line is generating momentum, and offense, for the LA Kings 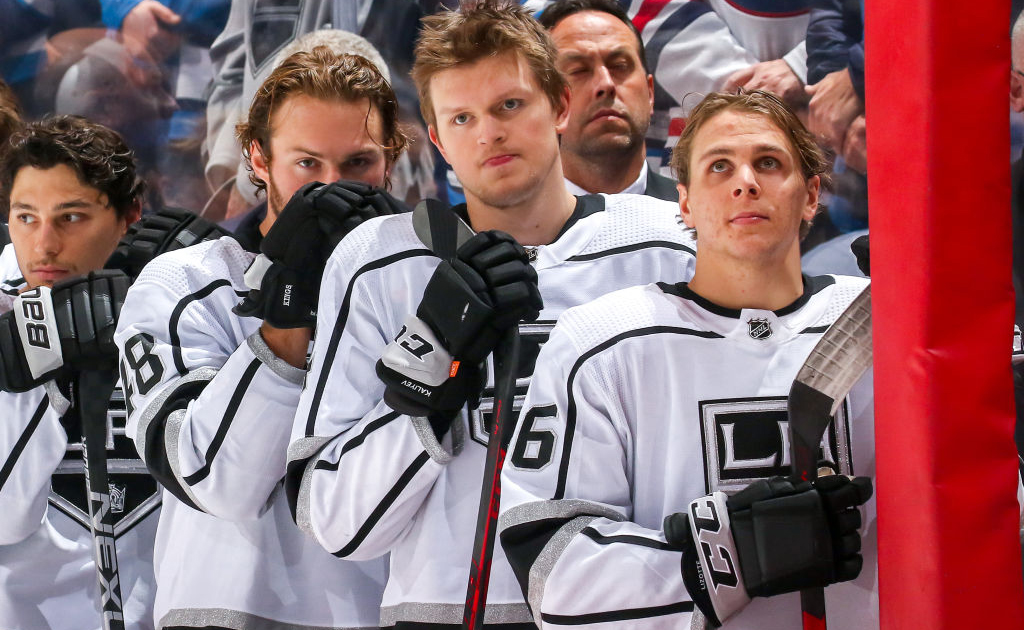 Blake Lizotte and Brendan Lemieux have had a pretty unified answer when asked about the success of their line over the last slate of games.

Okay then guys, how do you explain this play here?

Was it hardworking? Of course, and you should expect nothing else at this stage from the Lizotte/Lemieux combination, who have partnered nicely with Arthur Kaliyev on an effective fourth line for the Kings here as of late. Lizotte’s motor never seems to stop, as the Energizer-Bunny-esque centerman backchecked aggressively to force a turnover at the offensive blueline, sending the play the other way.

But was it simple? Was Lizotte looking off Alex Edler in the slot to hit Lemieux with a no-look feed a simple play? Was one-timing that pass top glove for a goal a simple play? Perhaps not. However you want to describe them though, Lemieux and Lizotte have combined for four goals over the team’s last four games and are turning some heads in doing it.

“We actually made quite a few plays that aren’t exactly our staple of being simple, but I think that’s just a beneficiary of getting more confident with each other and our play,” Lizotte said, after the game against Carolina on Saturday. “Hopefully we can continue that moving forward.”

Nice goal over the weekend aside, the identity of that line has indeed been simple. Let’s look back to the first of four straight defeats for the Kings, the 3-2 overtime loss against Winnipeg.

There’s that simple magic. Lizotte, recognizing the situation, fired his shot off the far pad, shooting strictly for a rebound, knowing he had his teammate crashing the net. Lemieux timed his run well, to use a soccer term, and buried the rebound. Keep. It. Simple.

If you polled Kings fans blindly and said that line would have four goals in four games, most would have presumed a hot streak for Kaliyev. It’s been Lizotte and Lemieux, however, who have bagged the goals as of late, and they’ve done so in a variety of different ways.

Over the last four games, that line has 42 shots attempts for compared to 24 against. They’re also controlling the scoring chances (22-14) and high-danger chances (12-5) over that span. Their marker against Arizona was two players making a play, with a bit more flash to it. That’s one way to get it done.

The goals against Arizona and Winnipeg are great examples of how it’s gone in the net in different ways for this line. Versus the Hurricanes, both goals came off of hard work in front of the net by Lemieux, creating space for Lizotte in the first period, and a rebound opportunity for himself in the third.

In that game against Carolina, with less than three minutes left in the game and the Kings trailing by a goal, Lizotte found himself double-shifted, out on the ice looking for the equalizer. The line as a whole saw time down the stretch, a reward for their play not just on that night, but their building improvements over the last series of games.

“That line was tremendous, I thought, and there’s no reason they shouldn’t be out there,” McLellan said. “They created numerous chances, didn’t give up much. Just because Blake is deemed a fourth-line player, there’s nights where he outplays the third line or the second line and needs to be out there. That’s why he was and that’s why his line was out there.”

McLellan has talked at length about his desire to see the fourth line not give back momentum as much as that unit did last season. Too often did the fourth line take the ice after a strong shift and not follow it up with one of their own.

Not only has that trend been reversed here early in the season, but that line is now gaining momentum on the Kings behalf and sending it back the other way.

“Absolutely, they’re further ahead right now, those three, momentum is handed off to the next line a lot of times,” McLellan said. “They’ve been responsible defensively as well, so we’re getting real good mileage out of that group.”

On paper, the line might seem like a bit of a weird match, but when you look at the collective of their abilities, it’s been a very effective unit.

Lemieux plays with sandpaper, he toes the edge without going over the cliff and he’s done so effectively this season, combined with a great set of hands in and around the net. Lizotte is the workhorse in the middle, with legs that never stop moving. He overcomes his size with skating ability and hard work, adding more than three percent to his faceoff metrics early in the season in the process. Kaliyev brings size and scoring ability to the line. The still 20-year-old Kaliyev has perhaps the best raw shot on the team, and a solid frame to go with it, contributing on the power play as well as even strength.

How it’s all come together has created depth for the Kings that we haven’t seen in the past. The Kings have no hesitation with rolling four lines at even strength throughout the majority of the game, with McLellan calling it a “coaches dream” on nights when he has 12 forwards all firing together.

Now, that won’t happen every night and the fourth line won’t be consistently relied on for offensive output each and every night. But they don’t need to be. Even on nights when the fourth line isn’t scoring, they’re finding ways to be effective.

Lemieux and Lizotte are each in the league’s Top 20 in terms of penalties drawn per 60 minutes. Though not power-play guys, they’re putting the team on the man advantage frequently through their play. Lemieux leads the Kings in hits per 60, while Lizotte ranks second on the team in takeaways per 60. It’s usually these little things that are praised when it comes to evaluating a fourth line, and so far, the unit is doing those with offensive production to boot.

Let’s not forget about Kaliyev either, who hasn’t quite been rewarded for his contributions, but is steadily making strides as an NHL player. He brings a different element to that line, and earned a bump to the top power-play unit on Sunday against the Coyotes. It’s easy, at times, to forget that in a non-COVID world, Kaliyev would be six weeks into his professional career, without last season in the AHL. He’s been a nice fit there with plenty of growth still to come.

As the Kings work to snap their current losing streak tomorrow evening against Toronto, they’ll need the play of the fourth line to continue to support the big guns. The offensive contributions they’re delivering are a welcomed addition right now, with the hopes they can continue their strong play, with or without the goals.

The Kings are scheduled to return to the ice this morning at 11 AM. Defenseman Sean Durzi, who was last night’s first star with the Ontario Reign, is expected to be back with the big club today. Practice notes to follow, Insiders! 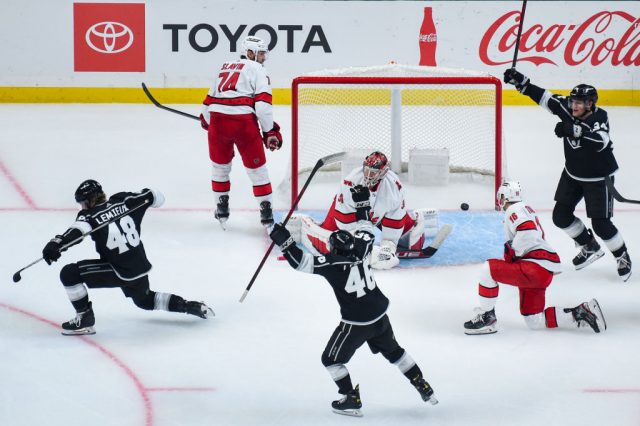 LOS ANGELES, CA – NOVEMBER 20: Brendan Lemieux #48 of the Los Angeles Kings celebrates his goal with Blake Lizotte #46 and Arthur Kaliyev #34 during the second period against the Carolina Hurricanes at STAPLES Center on November 20, 2021 in Los Angeles, California. (Photo by Juan Ocampo/NHLI via Getty Images)