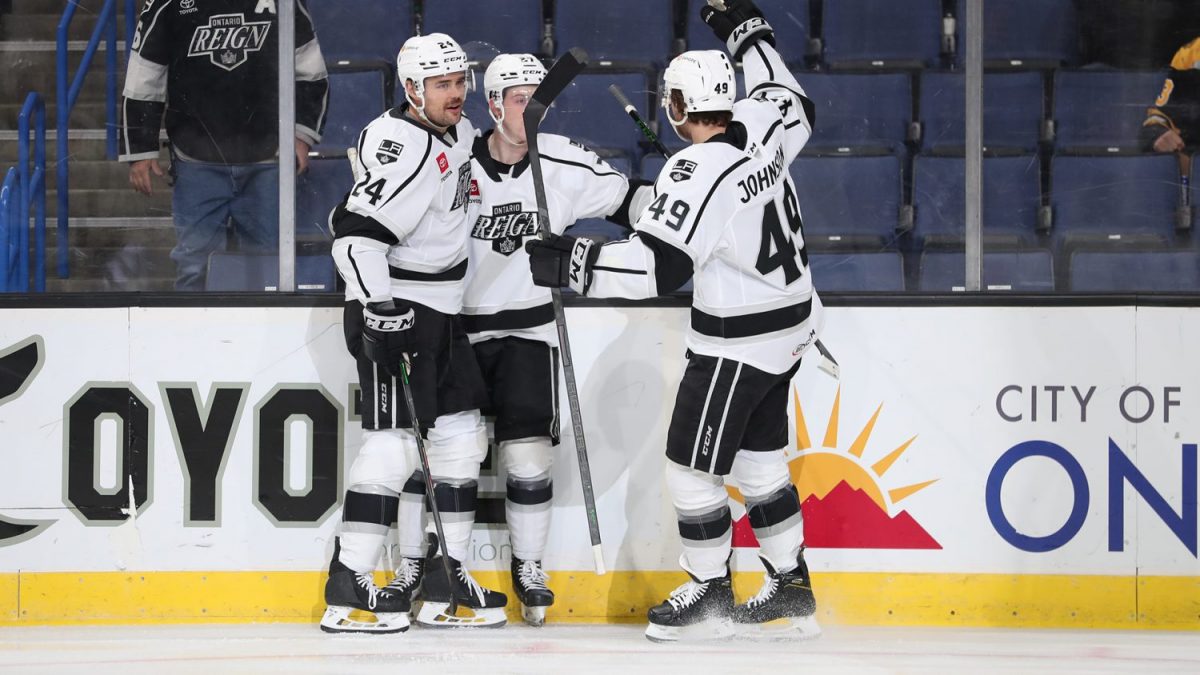 The Ontario Reign (11-2-0-1) potted three goals in the third period to earn a come-from-behind victory over the Stockton Heat (10-1-2-0) by a final score of 5-3 on Monday night at Toyota Arena. Reign forward Tyler Madden scored twice in the first period, while defender Sean Durzi picked up three assists to hand Stockton its first regulation loss of the 2021-22 season.

Ontario captain Brett Sutter scored for the third time in four games to tie the contest in the third, while forward Vladimir Tkachev was on the scoresheet for the seventh straight game and added an insurance tally in the third with his first North American pro goal. The Reign inched closer to the Heat in the Pacific Division standings and are third-best in the AHL with a points percentage of 0.821 after 14 outings.

More from Reign Head Coach John Wroblewski and Durzi below.

It was Madden who broke through early for Ontario, scoring his first of the night off a rebound just 2:13 into the opening period to make it 1-0. Assists on the strike went to defenders Helge Grans and Cameron Gaunce.

The lead didn’t last long, however, as Stockton scored twice in a span of less than a minute to take a 2-1 advantage. Matthew Phillips evened the score at 3:05 before Glenn Gawdin put the Heat in front at 3:55.

Ontario tied things back up at 2-2 later in the opening frame when Madden outraced the Stockton defense and put a puck past goaltender Adam Werner for his fourth tally of the season. A lone assist on the play was credited to defender Sean Durzi.

The Heat took the lead back in the second on a goal by Luke Philp just 1:06 into the frame that made it 3-2.

But a 3-goal outburst from Ontario changed the game in the third. First, Sutter tied the game up at 3-3 by winning a battle on the right-wing wall before putting the puck up high over Werner for an unassisted marker at 2:47.

The Reign went back in front at 6:08 of the final stanza when defender Austin Strand netted his second of the season with a blast from the top of the right circle. Durzi and Aidan Dudas had assists on the play, while Sutter provided a screen in front of the net.

Tkachev put the game out of reach for the Heat at 8:31, scoring off a feed from Durzi who got possession after a turnover by Stockton in its own end.

Goaltender Matt Villalta turned aside 18 Heat shots to earn his seventh win of the season for Ontario, while Werner suffered the loss for Stockton after making 21 stops. The Reign had a 26-21 edge in shots for the game, holding the Heat to just seven chances on net in each of the three periods.

Ontario is back in action on Friday night when they host the Bakersfield Condors at Toyota Arena at 7 p.m.