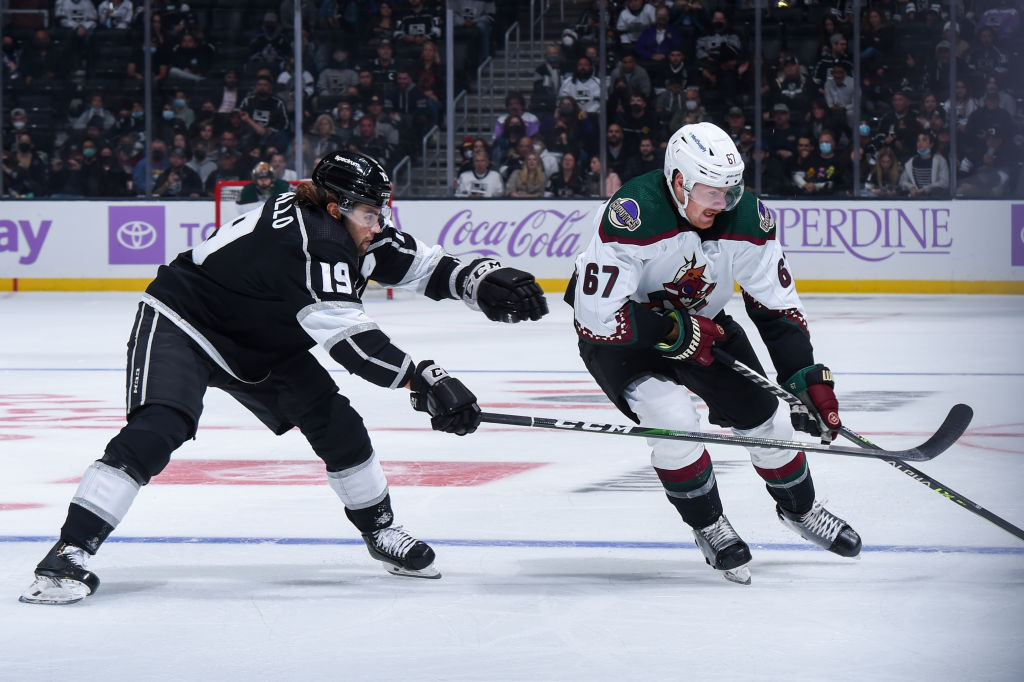 The LA Kings fell for the fourth consecutive game, the second of which in overtime, through a 2-1 defeat against the Arizona Coyotes.

Forward Brendan Lemieux scored for the second consecutive game, with Blake Lizotte collecting the primary assist, while Jonathan Quick was solid once again between the pipes with 25 saves on 27 shots in a hard-luck defeat.

The teams entered and exited the first period in search of the game’s first goal, in stark contrast to the Kings game yesterday against Carolina. The best chances of the opening 20 minutes fell to Andreas Athanasiou and Viktor Arvidsson, who each found themselves in alone on Arizona netminder Karel Vejmelka, but neither could beat the rookie goaltender to open the scoring.

The Kings broke the deadlock 5:39 into the second period as the combination of Lizotte and Lemieux combined on another goal for the Kings. As Arizona attempted to exit their own zone, Lizotte forced a turnover just inside the blueline and hit Lemieux for a one-timer from the right-hand circle, which was converted for his second goal in as many days.

Arizona knotted the game at one early in the third period, as it held the puck in the offensive zone off of a missed shot and capitalized on the second opportunity. Clayton Keller floated a pass to Shayne Gostisbehere, who hit Travis Boyd for a tap-in just outside of the crease. Gostisbehere tallied his team-leading 12th point on the play.

After a streak of late-game penalties, the two teams eventually went to overtime, where Arizona earned the extra point. On a shot that was initially ruled no goal, eventually overturned, defenseman Kyle Capobianco fired one home from the right for his second of the season, to give the visitors three wins from their last four games.

On the difference in tonight’s game
No finish, no finish on our behalf. 2-on-1’s, breakaways, staring at the goaltender, open nets, opportunities were there but no finish.

On if he feels the Kings are playing better than four straight losses
I thought we played really well in Winnipeg, I thought the two games against the top teams from out east we played very well in. Tonight, it was a frustrating night because of the amount of chances that we created. We’d probably be talking a different story if we had some finish, but we didn’t. Tonight’s a tough one to evaluate. The chances were there, it’s disappointing.

On the power play tonight, and if it was tough not to score on the one in the third period
I felt better about our power play. A full two minutes in the zone, a lot of movement, some looks. That’s the best two minutes we’ve had in a while on the power play. Despite not scoring, which I think is your point, when you get down on that, I thought it gave us a little bit of life.

On direction he gives the players on a night when pucks aren’t going in
We wanted to keep shooting the puck, we needed to get as much traffic in and around [the goaltender] as we could, numerous times, we shot the puck and hit our own players though, and just stick with it. Sometimes simplifying things, rather than making it difficult…right now, you can see coming down on some 2-on-1’s, we’re not always thinking shot first, we’re thinking pass and then when the pass dies, we’ve got nothing left. Those are 2-on-1’s, we’ve had breakaways, we had looks at the goaltender all alone and there’s nothing that I can tell them or the goalie coach [can tell them]. That’s 1-on-1 situations, where you’ve got to have skill, instinct and read what’s in front of you. We stay out of the way when it comes to that.

On the level of separation he sees from top to bottom in the NHL
Not a lot. This team, Arizona, has played really well lately. They have good structure, they’re all playing together, they make it difficult on teams and you’ve really got to earn your win when they get goaltending like that. The league is tight. We’re starting to see teams from the other conference and other divisions that we haven’t seen in a while, so we’re still all trying to figure it out, but I think the league is fairly tight.

– Brendan Lemieux (1-0-1) scored a goal for the second consecutive game. He has five points (4-1-5) in the last six games to lead all Kings skaters.
– Defenseman Matt Roy logged a career-high 30:27 tonight to lead all skaters. Roy eclipsed his previous career-high of 28:45, which was set in St. Louis in late-October.
– Jonathan Quick stopped 25 of the 27 shots he faced. Over his last six games, Quick has posted a 4-1-1 record, a .958 SV%, a 1.31 GAA and one shutout. He has allowed two-or-fewer goals in six of his nine games this season and has yet to allow more than three goals in any game.
– Blake Lizotte (0-1-1) tallied a point for the second straight game. He has four points (1-3-4) over the last six games.
– Tonight’s loss extended the team’s losing streak to four games, their second of four-or-more games this season.

The Kings are not scheduled to skate tomorrow, following the back-to-back. The team is set to return to practice on Tuesday morning at Toyota Sports Performance Center.