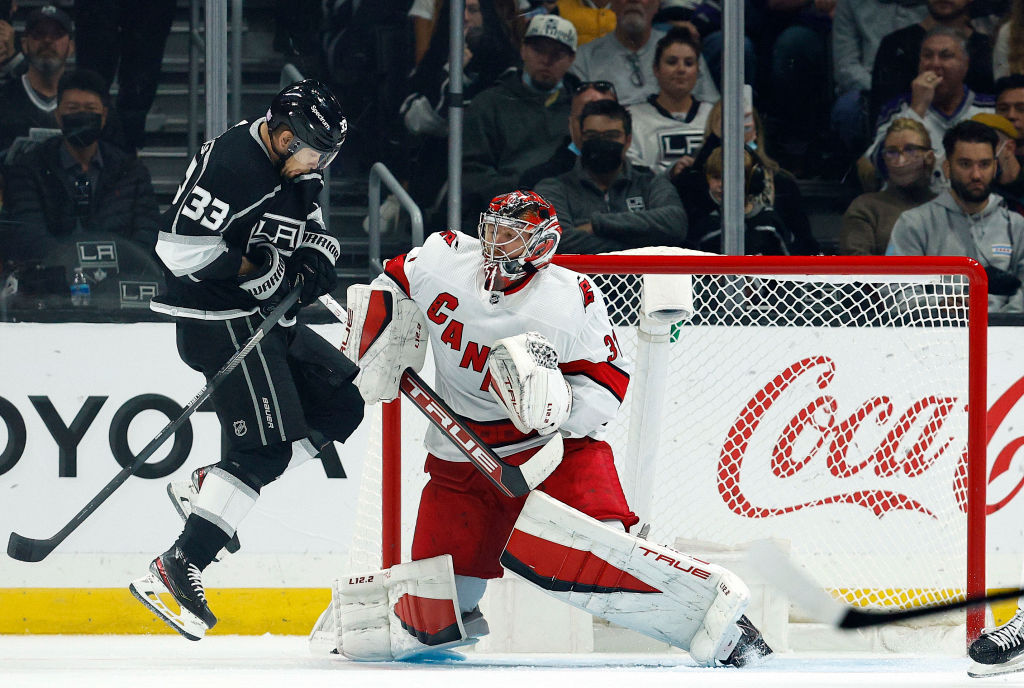 The LA Kings found themselves on the wrong side of a nine-goal affair, with Carolina claiming a 5-4 victory on Saturday afternoon at STAPLES Center.

The teams opened the game with a fast and furious first period, which ended with two goals for each side.

After Carolina opened the scoring, as Seth Jarvis finished a 2-on-1 play in transition past LA netminder Cal Petersen, the Kings fought back through their fourth line, as Blake Lizotte tallied his first goal of the season. Lemieux tied up his defenseman in front, giving Lizotte space, and the centerman fired home for the tying goal.

The Hurricanes once again pulled ahead, this time on a double-deflection, as Brady Skjei’s point shot was deflected by a pair of Hurricanes, with Derek Stepan getting the last touch for a 2-1 advantage. The Kings then tied the score on a deflection goal of their own, however, after Alex Edler’s point shot ricocheted off of Adrian Kempe and past Carolina netminder Frederik Andersen to send the game to the first intermission tied at two.

The second period featured even more offensive activity than the first, as the two teams made it nine combined goals through 40 minutes.

Carolina once again got the scoring started, as Sebastian Aho curled back off the left wing, and sent the puck through the slot, off of Tobias Bjornfot’s stick and in for the 3-2 advantage. The goal was once again answered by the Kings thought, as Kempe got his second of the afternoon. With the hosts shorthanded, Kempe intercepted a pass in his own end, went the length of the ice and buried five hole for his seventh goal of the season.

The visitors pulled ahead once more, this through off of a second opportunity in front, with Jesperi Kotkaniemi the goalscorer off a loose puck just outside of the crease, for a 4-3 lead. Lemieux then tied the game at four with a goal of his own from just outside the blue paint. The gritty forward gathered a Matt Roy rebound and swept his shot inside the far post to knot the score once again.

Forward Martin Necas capped off a wild second period with a nice solo effort to push the score to 5-4. The Czech-born forward drove down the left wing with speed, shielded the puck to the outside and deked back to his forehand to slot home his fourth goal of the season and the eventual game-winning tally.

The third period featured an ice tilt in favor of the Kings. Shots on goal read 20-2, in favor of the hosts, but the score read 0-0. At the end of the day, LA dropped its third straight game, this by a 5-4 margin.

On his game tonight, and hearing complements on the television broadcast
Yeah, it certainly validates my play. When you don’t get the outcome you want, sometimes you’ve got to clear your head and it takes a while to sink in really how you played and that’s where I’m at. It’s frustrating dropping two in a row at home, but as an individual, I’m happy with my play and my linemates play. If we can bring some of that every night, that would be great.

On what’s evolving and changing with his line right now
I think just keeping it simple. Tonight, we actually made quite a few plays that aren’t exactly our staple of being simple, but I think that’s just a beneficiary of getting more confident with each other and our play. Hopefully we can continue that moving forward.

On the Kings playing a 5-4 game tonight
I think we have the skill in the locker room to do it, certainly we were right in this game. Even in the third period, we had a few chances that could have made this game 5-5. That’s not necessarily the style we want to play. I think our team is built to win maybe more of a 3-2 type, tight-checking game. As I alluded to during the intermission, it was a little too loose for us, racehorse hockey, trading chances back and forth and that’s not typically our identity. Moving forward, we need to get back to our identity and play a little bit more tight-checking.

On earning the trust of the coaching staff to be on the ice late in the game
It’s huge. Any player wants to be out at the end of the game, when it’s a one-goal game, you’re not a competitor if you don’t want to be in that situation. Again, like you said, you earn it and it felt good to be out there. Unfortunately, we came up short. Going forward it gives you confidence that you have the coach’s trust.

On a “non LA Kings” type of game tonight
Yeah, it was probably an un-Carolina Hurricanes game tonight too, considering how well they check. It was an odd night. First two shots on goal go in, lots of goals scored, which is great for us on the for side, the against side is not how we want to play.

On Blake Lizotte’s play and earning the trust of the staff to be on the ice late
That line was tremendous, I thought, and there’s no reason they shouldn’t be out there. They created numerous chances, didn’t give up much. Just because Blake is deemed a fourth-line player, there’s nights where he outplays the third line or the second line and needs to be out there. That’s why he was and that’s why his line was out there.

On the focus when he talks with the team tomorrow
We’ll look at the chances that we created and those would obviously be positive, and then what can we clean up. There’s some careless pinches, lack of cover, we got beat with speed a little bit and a lot of that was backend reads more than the forwards. We’ll talk with the d-men a little bit and try to fix things there. It will also be to cleanse and move on. You asked me the question the other day about our next opponent, and we’ll have to begin to prepare for them.

On the balance in even-strength minutes tonight between the four lines, and if that’s his ideal rotation
Yes, I think that would be any coach’s dream, but that rarely happens that you have 12 players that are playing at the top of their game and the score will dictate. As the night goes on, the bench gets narrower and you just go with that. You get a feel for who you want on the ice and who you don’t, minutes get shortened up at that time.

On his overall takeaways from tonight’s game
I think there’s situations that we can play better defensively. I’m happy that we had the offense we had tonight, and there could have been more. Again, with the 2-on-1’s and not even getting a shot on goal, goal called off, could we have avoided the goaltender, he might’ve made the save then, who knows, but there could have been more. That’s the positive in the night, is that the offense is there. Line combinations, whether they worked or not, maybe we found something. The negative is we got away from who we are and what we do well. It cost us tonight.

– Adrian Kempe (2-0-2) registered his first multi-goal game of the season. Kempe now has seven goals this season, second on the team, trailing only Anze Kopitar.
– Brendan Lemieux (1-1-2) registered his first multi-point game of the season, the eighth time in his NHL career he’s collected two points in a game. Lemieux now has four points (3-1-4) in the last five games.
– Alex Edler (0-2-2) recorded his second multi-assist game of the season. Edler is now second on the team among defensemen in points (0-6-6).
– The Kings tied the game four different times today. This is tied for the second most game-tying goals scored in a single game in franchise history. The most is six (1.13.84 vs. WPG) and tonight was the first time since November 2, 2002 that the Kings have scored four-or-more game-tying goals in a single game. Overall, this is the seventh time in franchise history the Kings have scored at least four game-tying goals in a game.

The Kings are not scheduled to hold a morning skate tomorrow, considering the back-to-back. The team is slated to host Arizona tomorrow evening at 7 PM at STAPLES Center.