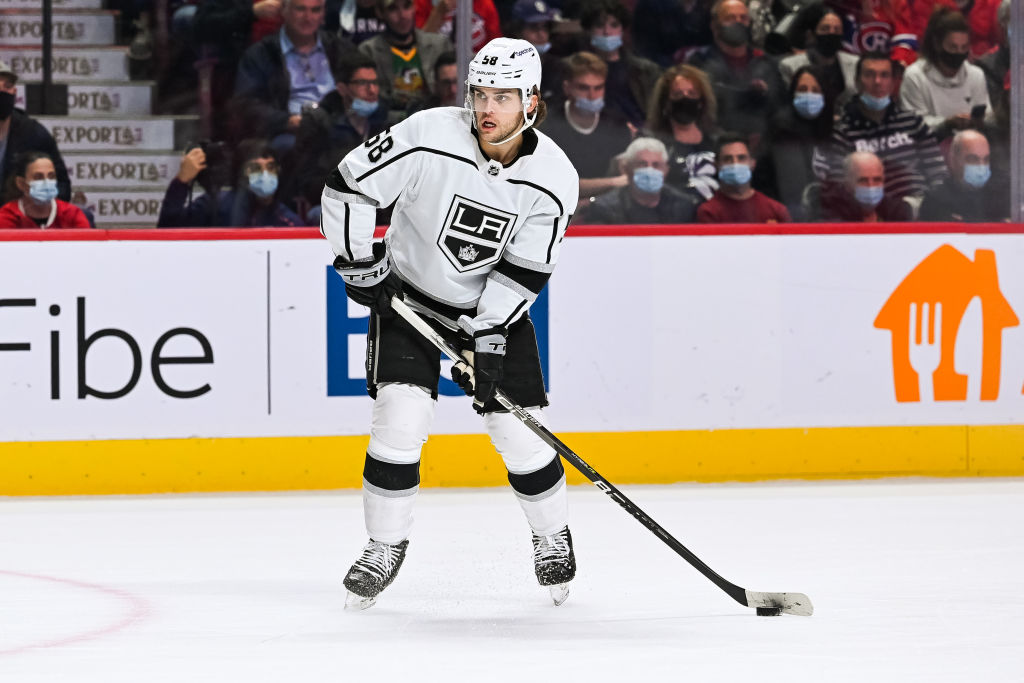 The Kings hit the ice again this morning off of yesterday’s 2-0 defeat against Washington.

Last night’s game wasn’t necessarily one that the Kings were upset with overall. They checked extremely well and they did the things that they wanted to do in a lot of areas of the game. That did not include the goal column, however, and when you don’t score, you can’t win.

This morning, the Kings made one adjustment to their line combinations, at least on the first run-through of a drill that featured line rushes. Adrian Kempe was in a gray jersey, slotting up alongside Anze Kopitar and Viktor Arvidsson, with Dustin Brown in white, skating next to Rasmus Kupari and Trevor Moore.

Todd McLellan noted that the top line hasn’t quite given the Kings the same level of offensive threat as of late that they did earlier in the season.

“That line hasn’t had as many dangerous chances as it did earlier in the year, so we’ve got to shake the tree a little bit,” he said.

When you aren’t scoring a ton of goals at 5-on-5, typically change comes. McLellan remained complementary of Brown, who now adds an element of physicality and leadership to the third line with Kupari and Moore.

“He’s 37 years old, he leads us in hits, he’s shot the puck and he’s played a hard, aggressive game, he’s doing a lot of the things,” McLellan said. “He’s provided leadership and he’s done the things that you ask of him, it’s just not going in for him right now. Brownie will be just fine where he goes, he just needs to pop one in the net and I think things will come for him.”

Speaking with Trevor Moore today, he was excited about the possibility of adding Brown to his line. That’s a player who brings a wealth of experience to any unit, and Moore pointed out his wide array of contributions as being things that he’s excited about linking up with.

“Physicality, all of the things that Brownie does,” Moore said. “He can score, he can pass, he’s been a really good player in the league for a long time. Obviously, a super impressive career, it’s always great to play with a guy like that.”

Here’s how the group aligned during today’s skate –

Focus On Scoring
After last night’s game, McLellan felt that his team created enough opportunities to score a couple of goals and last night, a couple of goals is all it would’ve taken. He lamented his group’s “polish” in those scenarios and felt that they made an extra pass when a shot would’ve been the play or didn’t capitalize on a set of odd-man rushes when they presented themselves.

“I think we had a bit more of an offensively focused day today, I think they’re going to go in, you just have to keep at it and bear down,” Moore said, when asked about the matter. “The more that you don’t put them in, the more you really focus on them when they come to you. As a group, I think we’re going to get there, too many talented guys not to.”

Speaking with Todd McLellan, he gave what I found to be a thought-provoking answer to the question, of how do you work on finishing.

It’s obviously situational, there’s not a one-size fits all approach. No two chances are the same. There’s the thought of can you work on that in a practice setting, but also the thought of does too much focus on that one area lead to complications. Do you want your players thinking in situations where they should be instinctively reacting?

“Sometimes the more you work on it, the tighter the guys squeeze the stick,” McLellan said. “You can tell the guys that have played before, you sometimes go away from it. We talk a lot about our 2-on-1’s and now they get in the situation and instead of naturally reading what’s there, they begin to think and they squeeze the sticks. We’ve got to be careful. In and around the blue paint, we worked on some of that stuff today.”

McLellan praised Saturday’s opponent, the Carolina Hurricanes, for their play around the net and called that an area of emphasis both offensively and defensively. Net play today centered around a specific drill the team ran midway through practice, which focused on smaller area situations around the net. 1-on-1 battles, 2-on-2 battles that benefitted all involved.

From an offensive perspective, there are the repetitions of getting shots, followed by second and third opportunities. Defensively, the Kings were able to work on tying up and boxing out, with goaltenders also tested in those situations. A drill that, ideally, benefitted all involved.

“We’re working on boxing out, clearing the crease, goalies are getting stress situations there,” McLellan added. “Offensive and defensive, those are the best kinds of drills you can come up with, where everybody benefits from it. It was really short bursts, so we weren’t expending a lot of energy, but we were specifically working on situations.”

Answer The Kale
With now nine games under his belt, defenseman Kale Clague is settling into his role with the Kings.

He’s averaged just over 18 minutes per game, he’s stepped into a spot on the top power-play unit and he’s finally getting an extended run of games here with the Kings, after playing sporadically over the last two seasons. Todd McLellan took some time to reflect a bit on Clague’s path this morning.

“To think about what [Kale]’s been through as an individual, he’s been in our organization for a long time, he’s waited for his opportunity,” McLellan said. “He earned an opportunity a little bit last year, didn’t quite capitalize on it. This year, he had to start down below, an opportunity knocked at his door, it doesn’t matter how you get here and who’s paying the price for that, but he got here and he’s played pretty well for us since then.”

McLellan touched on Clague’s time with the first power-play unit, and said that at times, he’s still finding his way there. It can take some adjusting to enforce your own game on a unit that features so many highly skilled offensive players. The man advantage is Clague’s place to shine right now and he’s slowly but surely doing those things on the top unit.

In terms of even strength, Clague has partnered both Alex Edler and Olli Maatta over the last stretch of games. It’s been at even strength that McLellan has seen noticeable growth from Clague, highlighting his positioning, and how that has opened up his physical gifts.

“5-on-5 play, he really understands positioning now, where we want individuals to be on the ice,” McLellan said of Clague. “His time in the organization has helped him in that area, and when he’s positioned well, his size isn’t a detriment. He can use his legs, his mind, his stick to defend and get on offense. We’ve seen a lot of improvement in his game.”

We spoke with Clague himself on a variety of topics earlier today. Hear from the young defenseman below –

The Kings are set to practice again tomorrow at 11 AM at Toyota Sports Performance Center, in advance of Saturday’s matinee game against Carolina. The team is not expected to hold a morning skate on Saturday or Sunday, when they host Arizona at 7 PM.

By Zach Dooley
2 Comments
Behind the Scenes