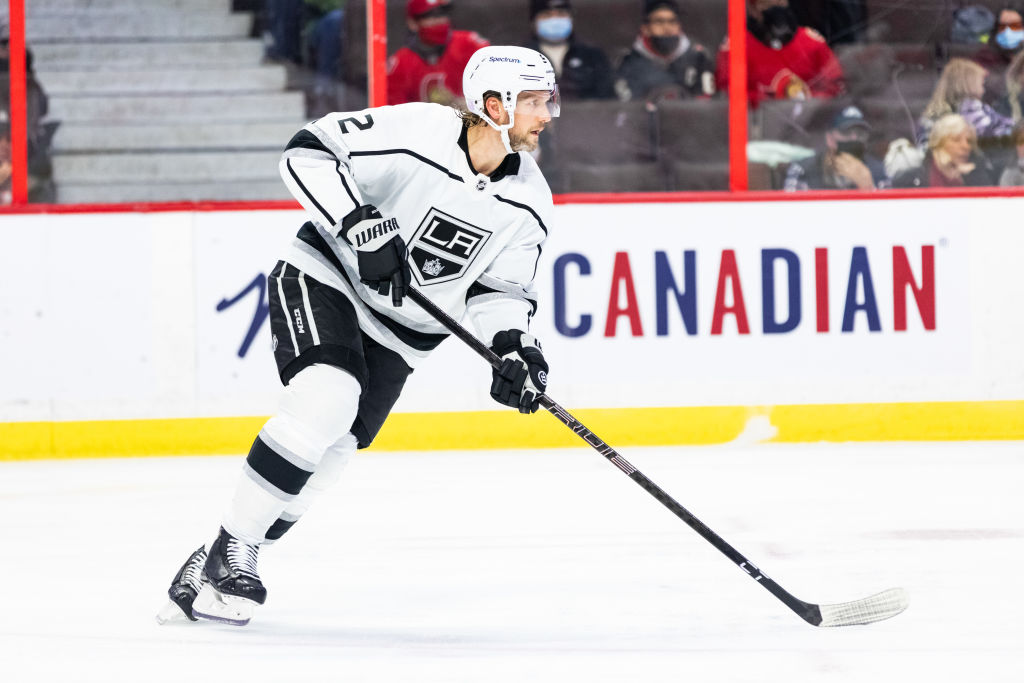 Another day on the ice, Insiders.

The biggest news of the day was that Viktor Arvidsson was back with the group today, skating in his usual spot alongside Anze Kopitar and Dustin Brown. Arvidsson has played the majority of his season in that spot, on the left side of that line, only moving off of it due to his presence to the NHL’s COVID Protocol minutes before the Kings played Buffalo late in October.

“We just got through practice, and I need to sit with him, it will probably be tomorrow morning when I sit with him and see how he’s feeling,” Todd McLellan said today. “We’ll see how he recovers after this skate. He got out of protocol much earlier than today, but had a different illness after that, he had a setback, so we’ll see how he’s feeling tomorrow. I think this guy is full of energy anyhow, I’m not worried about his energy levels, it’s just whether his hands and his mind are ready to go and I think they will be.”

In a corresponding move, forward Gabriel Vilardi was assigned to the AHL’s Ontario Reign this morning. Vilardi was in protocol alongside Arvidsson, and with Arvidsson now back in the fold, it left the Kings with 15 forwards for 14 spots. Being waiver exempt, and not having played a game in three weeks, Vilardi was the odd-man out and skated with Ontario this afternoon.

“Gabe was reassigned [to Ontario] this morning and Rob Blake and the development team sat and talked with him,” McLellan said. “I spoke to the coaching staff from the [Reign] about his situation, and it’s one that obviously none of us want to be in. He doesn’t want to be in it, we don’t want to be in it. The team is playing well right now and he needs to get playing, and that’s just how it is. I used the word competition yesterday and it’s good to have healthy competition. I think him playing a lot of minutes down there, getting some confidence, will be important for him.”

With the Kings now back at full strength at the forward position, here’s how they lined up this morning –

The personnel for tomorrow against Washington is still a bit of a guessing game. We have the lines listed above, and we know how the team lined up in their games in Winnipeg, but the status of Arvidsson for tomorrow, as well as who exactly comes out, remains up in the air.

Power-Play Prep
As the Kings prepare for Washington tomorrow, they have now had two full practices, on consecutive days, for the first time in a long time. The Kings have not had that luxury as of late and had the opportunity to work on a couple of things here, including special teams.

McLellan began by pointing out that the Kings are clicking right around the 20 percent mark here on the man advantage this season and he’s accurate, with the team sitting at 18.2 percent, firmly in the middle third of the NHL. At the same time, the Kings scored once on the man advantage on the road trip, but also conceded a shorthanded goal, which created a net zero on the trip.

“It can’t give momentum back and that’s the big thing right now,” McLellan said. “It’s finding ways to produce at certain moments. Obviously 20 percent isn’t elite in the league, but it’ll win you enough games. It’s the momentum opportunities that we’re giving away or giving back to the other team, so we’ve got to fix some of those teams.”

Once in the zone, the Kings have been okay in a lot of situations. They’ve moved the puck around, and as we saw in Ottawa, they were able to get a goal through Anze Kopitar. When McLellan believes the team has fallen short has been through zone entries.

With new personnel, it’s been that part of it that’s been struggling, as he spoke to today.

“Breakouts and entries, we’ve normally had a lot of success in those areas, but we’re struggling a little bit there, so we spent a lot of time in that area today and we’ll continue to grow it,” McLellan said. “We’ve got Clague and Arvy on the first unit, those are two new bodies, one’s a quarterback and the other an important piece, and the second unit is almost brand new without Gabe being there. There’s a lot of new pieces, we’ll figure it out as we go.”

Keep Calm and Edler On

On the recent road trip, McLellan talked about the calming presence that Alex Edler brings and showcases to a group of young defensemen.

“He has a calming presence to him, you never really see Alex in panic mode,” McLellan said. “Those veteran, Swedish defensemen, I’m not saying that he’s Niklas Lidstrom or Niklas Kronwall, he’s Alex Edler, but they have a calmness to them. Even when it wasn’t going well, they calm things down.”

Edler believes that the calming nature comes through age and experience.

“I think I’m a pretty calm guy and with more experience, you stay pretty steady out there,” he said today. “No matter what’s happening in the game, you try to play the same way through it. I think that comes with age and experience.”

Edler has served as a strong, veteran presence for some of the team’s younger defensemen to learn from and grow under. Seeing the poise that Edler has, through experience, is a great learning tool for the team’s younger players, and showcases poise in situations, especially those when perhaps a mistake was made, and is able to move past it as well as anyone.

In essence, he’s what the Kings knew they were getting this summer and he has proven adept in his role with the team.

“[He makes] one, simple play that alleviated pressure at the right time and as a veteran, with a lot of [experience] in the league, he can afford in his mind to err and overcome it,” McLellan added. “Some of the kids, they’re afraid to err, they carry it with them. Alex has maybe a little more poise in certain situations and he’s able to calm it down, I think is what I was trying to get at.”

All Over Adrian
Lastly, hear from forward Adrian Kempe today, as he spoke on a number of topics following today’s practice. Enjoy!