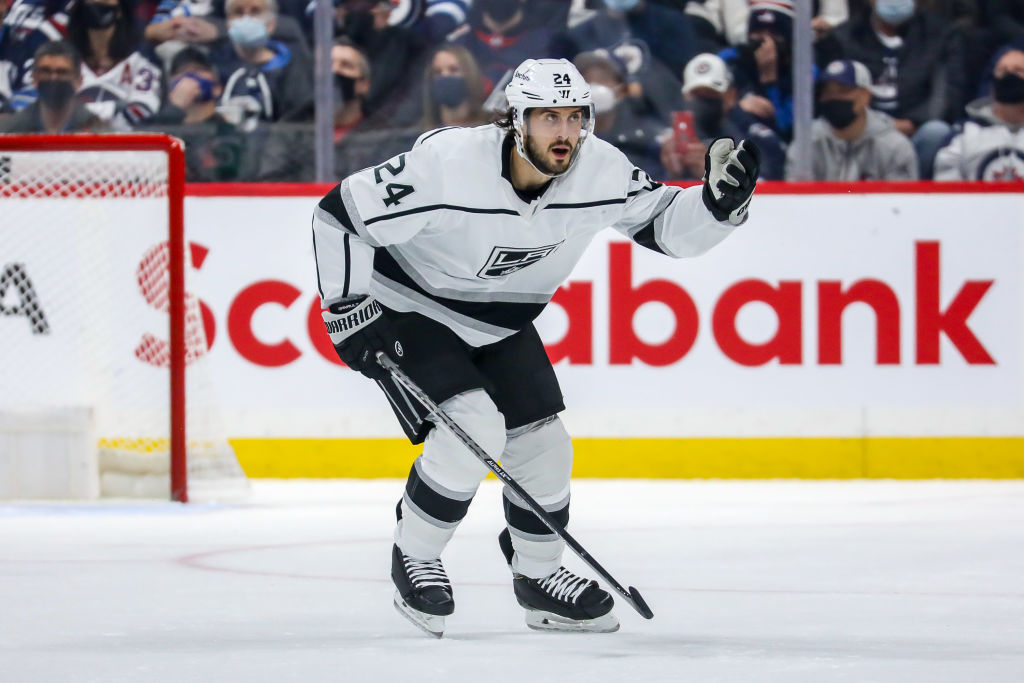 The LA Kings were back on the ice this morning at Toyota Sports Performance Center, after yesterday’s team off day.

We saw one familiar face on the ice today in forward Gabe Vilardi, but we did not see Viktor Arvidsson. Vilardi and Arvidsson are both “out of protocol” per Todd McLellan, yet neither have been officially added back to the active roster. Arvidsson was “sick” today, per McLellan, resulting in his absence.

“Arvy didn’t skate today, he’s sick, so I don’t know where he’ll be,” McLellan said, following practice. “The rest, we’ll figure out as we go. It’s hard not to reward the group that’s playing right now, although we’ve got to think about the talent level that’s sitting out and who those guys might be. We’ll have some tough decisions to make, moving forward, and we’ll make them. I can’t tell you what they will be right now.”

Also skating in a regular jersey was forward Lias Andersson, who moved from a non-contact jersey to a full-contact one in the final practice of the team’s recent road trip. A good sign that Andersson too is closing in on a return to the lineup.

The team made some roster moves over the last two days, with the duo of Kale Clague and Austin Strand assigned to the AHL, and then recalled 24 hours later, in cap-saving maneuvers. Both were on the ice today. Additionally, forward TJ Tynan was assigned to the Ontario Reign with the defensemen yesterday, though he was not recalled today. Tynan will head back to the AHL, where he tallied 13 points (3-10-13) from eight games played earlier this season.

With all that now behind us, here’s how the Kings lined up this morning –

The group didn’t really take a ton of line rushes today and when they did, the players in white jerseys were mixed, considering eight of them. The units listed above were the lines we saw in Winnipeg on Saturday, with Andersson and Vilardi listed as extras. That’s not to say though that we won’t see either of them, or Arvidsson for that matter, included in Wednesday’s lineup against Washington. Plenty to be sorted over the next 48 hours.

What makes things more challenging here is that none of the 12 players who played on Saturday have shown that they should come out of the lineup. None have played their way out, in fact some have played their way in. That’s a great problem to have in the grander scheme of things. McLellan had this to say when asked about having three NHL players ready to integrate back in, and 12 forwards playing like they don’t want to come out.

“We have an American League team that’s playing extremely well right now too, so I would start there,” McLellan said. “That is – those three factors, the two you talked about and the one I did – a sign that the organization has done a good job of building up the prospect pool. Development has done a pretty good job of bringing these players up, the American League team has done a good job of developing them and handing them off, and our group is evolving here. The depth in the organization is not only player-wise, but it’s all these other people who are handling the players, they’ve done a really good job as well. The best thing you can have in an organization is competition. There can’t just be jobs handed out for the sake of handing them out, it’s everywhere right now. It’s here, it’s the players in between, it’s the players entering the American League. You’ve got to bring it day in and day out.”

Brain Trust
Building off of the quote above, McLellan also expanded a bit on players earning the trust of the coaching staff, especially looking at those in the bottom six.

If you think about it, there’s two levels to that equation, with McLellan touching on both. First, those players have earned the trust of McLellan and his staff, meriting less shortening of the bench in key situations. Secondly, their play in those situations has been at a level of meriting more ice time, not less. Both have factored in a bit here for the Kings on their eight-game point streak.

“Yeah, of course we do, we feel way better about putting them on the ice, but it’s not as much the coaching staff changing as the players have created that trust,” McLellan said. “If you didn’t have the trust, you wouldn’t put them out there, and now you’re trying to reward them. When you get to that point, and they continue to evolve, then it’s powerful.”

We’re seeing the team’s third and fourth line logging minutes in more important situations, and they’re answering the reward with production. In Winnipeg, it was those two units responsible for the team’s two goals. Brendan Lemieux scored in Montreal, while Trevor Moore scored in Toronto.

Not only are those lines playing more, but they’re doing more with their time on the ice, and that depth is a great positive for the Kings.

Managing Minutes
Early on here in the season, Anze Kopitar has trended right around his time on ice totals from the last two seasons, actually playing a few seconds more per game, on average, than he has over the past two seasons.

A big narrative heading into the season was how Phillip Danault’s involvement and integration might lower Kopitar’s ice time by a bit. Well, in terms of overall minutes, it has not, though in a couple of other ways Danault’s presence has changed Kopitar’s situational usage.

First, there’s the thought of where Kopitar starts his shifts. He’s currently averaging the highest percentage of shifts started in the offensive zone during his entire NHL career. At just under 60 percent, it’s a sizeable bump from the last two seasons, when he started more than 50 percent of his shifts in the defensive zone.

“His o-zone starts are [up], depending on the score,” McLellan said. “As the game gets narrower, and gets closer to the end, yeah we can start him in the d-zone, but I think his minutes are a little bit…I never want to say easy for Kopi, because he works so hard and carries so many people around, but it’s shared stress now with Phil. It’s not Kopi starting every period anymore, sometimes Phil has to establish the momentum a little bit. Sometimes Ras has to establish the momentum a little bit. It’s not always Kopi starting on the penalty kill, but he’s still going to get his penalty kill and power-play minutes.”

Secondly, is the topic of penalty killing, as McLellan mentioned. The Kings are, overall, killing fewer penalties early in the season, which is an obvious positive. There’s also more balance with the PK minutes. This season, five Kings forwards are averaging between 1:00 and 1:34, with Kopitar leading the way at 94 seconds per game. That’s down 30 seconds from last season, and the drop off between the team’s top two penalty killers, Kopitar and Alex Iafallo (1:57), to Adrian Kempe in third (1:19) was drastic.

Lastly, and perhaps most interestingly, there’s the topic of shift length. When asked about the comparables between Kopitar and Danault, McLellan gave an interesting answer. When you look at individual shifts, the two are almost identical. Danault averages 25.2 shifts per game, Kopitar averages 25.1.

In terms of shift length, however, Kopitar averages 51 seconds per shift, while Danault averages 43 seconds. Kopitar’s shift length is the longest amongst Kings forwards, while Danault’s is closer to the shortest. An interesting designation.

“Shift length is a huge one,” McLellan said. “If you look at the number of shifts Phil plays, compared to the number that Kopi plays, there’s actually night’s he’s playing more. Kopi’s engine might run a little different, he’s used to playing longer shifts, Phil’s maybe run shorter, but in any case they’re pretty close and there’s nights when Phil is playing more shifts than Kopi.”

During last night's game in Winnipeg, Phillip Danault traded a puck for a military patch with a Canadian Armed Forces member. 🤝 pic.twitter.com/N71KxMAQlq

Lastly, a human moment from Danault. He was captured on camera during warmups in Winnipeg, trading a puck from the ice for a military patch from the stands. The classy forward gave an equally classy answer when asked about it today –

“I think I definitely won that trade,” he said with a smile. “It was a great moment, you don’t expect to be in those moments. I just saw my name on the [sign], it said score three goals and I’ll give you a souvenir, and you give me a souvenir as well. I gave him a puck, I wish I gave him a stick, just in the moment I got caught in it. I gave him a puck and I think it showed my support for the military. They serve us [in Canada] and in the US, it’s awesome, they do so much for us, we respect them a lot. I think it was just an honor for me to give the puck and to receive the patch from a great guy.”

You never necessarily expect to be caught in those small moments, and Danault clearly didn’t think it would blow up the way it did. He was just happy he could support a military member in the stands, and again expressed his appreciation for those that serve their country.

“As hockey players, we recognize what they do. It was definitely a great moment, it was easy for me to do that.”

Catch Danault’s full quote, and the rest of his interview from earlier today, below.

By Zach Dooley
47 Comments
Behind the Scenes