From rookies to partners, Mikey Anderson and Tobias Bjornfot excelling for Kings 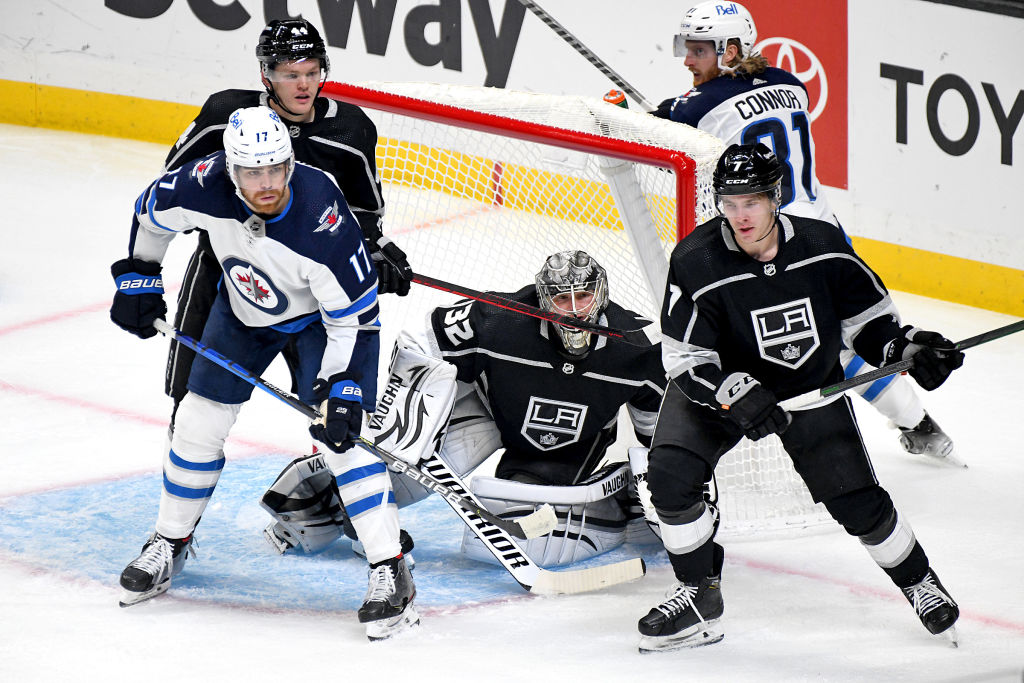 Todd McLellan was quick this morning to dish credit where credit is due.

The answer was in reference to a question about the pairing of Tobias Bjornfot and Mikey Anderson, put together right at the start of the Kings seven-game winning streak and a constant from that point on.

Anderson and Bjornfot played with more experienced partners last season – Anderson with Drew Doughty and Bjornfot with Matt Roy. With Doughty out of the lineup for an extended period of time and Sean Walker out for the season, a pair of openings were created on the right side of the blueline.

During the 2020-21 campaign, with both players in their first full seasons at the NHL level, having that experience alongside them was almost a prerequisite. Putting two rookies, then aged 19 and 21, on the ice together for an extended run seemed unthinkable. Presently, however, the situation has dictated change for the Kings, and while this pairing may not have been the first thought for the coaching staff, it turned out to be a great one.

And, on that front, cue Yawney’s influence.

Yawney felt that Anderson was the right player to move over to the right side, with the Kings facing an alignment on the backend that includes five left-shot defensemen compared to just one who shoots right. The assistant coach also felt confident in the pairing of Bjornfot and Anderson, the team’s two youngest defensemen, after Bjornfot got back on track after a slow start to the season.

“Yawns felt something there, he felt comfortable putting Mikey on the right side,” McLellan said this morning. “Toby, it took him a little while to get going during the season, but Yawns had a real good talk with Toby, we’ve talked about that numerous times. As Toby came out of it, [Yawney] felt those two would complement each other and play real well.”

Complement each other they have.

Since they were united as a pairing back in late-October, Anderson and Bjornfot have surrendered exactly one goal at 5-on-5, compared to ten in their favor. The pairing is on the positive side of seemingly every puck possession and offensive opportunity metric, showcasing that the Kings are possessing the puck with the two on the ice, and keeping it out of their net when they don’t have the puck.

In some ways, it’s an odd union, placing the soft-spoken Bjornfot alongside the effectively communicating Anderson.

Anderson’s communication skills have been praised by both McLellan and Doughty. Bjornfot is reserved in nature, and certainly not known for being a loud individual. Perhaps though, that’s why the pairing has meshed well. Bjornfot has referenced multiple times how he and Anderson have gotten to know each other pretty well, and that’s perhaps led to an increased comfort level for him with his new partner.

For his part, Anderson is doing his best to draw that conversation out of Bjornfot, though doing so to Doughty’s level might be impossible.

“He’s not a loud guy to begin with, so it’s hard to try and get him to talk, but I think he’s starting to come out a little bit more,” Anderson said. “Having some confidence, he’s playing well right now, it helps him to be a little bit more vocal, but I’ll keep making fun of him trying to get him to be as loud as Drew, but we all know that’s not going to happen. He’s been playing great, he’s easy to play with…I love playing with him.”

So, on the ice, what has worked so well for the young duo?

For Bjornfot, he’s really focused on improving the offensive side of his game, adopting a more aggressive mindset that’s led to increased offensive opportunities for both him and the Kings. Bjornfot has made a concerted effort to join the rush more and called that the part of his game where he feels he’s made the most progress from last year to this year.

“Probably my offensive side of the game, getting more involved, trying to jump up in the rush more and being a threat,” he said, when asked about his areas of growth.

Like McLellan, Bjornfot referenced that conversation he had with Yawney as being a turning point with regards to his aggression. His head coach described his style at the beginning of the year as “half in, half out” as it relates to his assertiveness. Not at all a reference to his commitment level, but rather to his style of play. He had all the tools to thrive in the Kings aggressive mindset, but he wasn’t using his skating to his advantage enough in the early goings.

In the Kings 3-2 win over Buffalo last month, we really started to see that change. The young defenseman had two assists in that game, the first multi-point game of his NHL career. His play on the game-winning goal was a perfect indication of the steps he made. He showed the aggressive mindset to join the rush as the trailer, his skating ability to power to the outside and create space, and his poise on the puck to outwait a defenseman and slide a pass to Alex Iafallo for the go-ahead goal.

“I’m trying to join the rush as much as I can and trying to just play my game,” Bjornfot said after that victory. “[The coaches] have said to me, ‘be a more offensive threat’ and play your game, use your skating. That’s what I’m trying to do.”

His new partner has noticed the same thing.

“He’s got great legs, he loves to skate, loves to join the rush if he can,” Anderson said of Bjornfot. “He’s been more involved offensively, which is what everyone wants him to do. A guy like me, I try to help him out, try and be a good partner for him, talk a lot, and encourage him to produce offense and help pick up Walks and Drew’s offense that is missing right now.”

When it comes to Anderson, for as impressive as he’s been in his first 75 games at the NHL level, there was still that “Drew Doughty’s Partner” label attached to him, though rather unfairly so in a lot of ways.

Anderson was a natural fit alongside Doughty last season, proving to be one of the team’s most successful storylines as a 21-year-old defenseman playing first-pairing minutes. With Doughty out, Anderson moved to the third pairing in the next game, before eventually finding a home on the right side, playing with Bjornfot.

Switching sides presented its own set of challenges, though Anderson played the right during his time at Minnesota Duluth, where he won two national championships at the collegiate level. The well-spoken blueliner described the differences in coming around the net, having to position his body differently to both make and receive passes, as well as the differences in angles when defending on the rush. The adjustment, to the naked eye, has felt fairly seamless.

With the strides in Bjornfot’s game offensively, it’s lent itself well to Anderson’s “take care of his own end” mentality. Last season, the Kings allowed nearly seven fewer attempts with Anderson on the ice than off it, on a per-60 minute basis. This season, the team around him has been better, but he still slots in at more than five fewer attempts per-60 minutes.

Those natural defensive abilities are evident, but Anderson has also embraced the team’s more aggressive mindset. McLellan told us that the Minnesota native has always asserted himself well defensively, but specifically in the Kings win over Ottawa, he began to show that same aggression towards the offensive end as well.

Anderson jumped into the rush at times, had a couple of good opportunities, and has shown he has more than just good defensive instincts. Let’s not pencil him in for Doughty’s offensive totals just yet, but there’s more than just a stay-at-home skillset to Anderson’s game.

How it’s all blended together has been a remarkably effective pairing. No duo has played more minutes together this season at even strength than Anderson and Bjornfot. While Matt Roy leads all defensemen in time on ice since Doughty’s injury, from a pairing perspective, it’s been Bjornfot – Anderson at the top of the charts. When the play is at five-a-side, they’ve been over the boards frequently and have turned some heads in doing so.

As the Kings continue to await Doughty’s return – estimated around eight weeks from October 27 by Kings General Manager Rob Blake – seeing that strong play continue from the team’s youngest pairing will be paramount. And, from the sounds of it, that continuing will only serve to increase the role provided to Bjornfot and Anderson moving forward.

“They’ve been good that way,” McLellan added. “Their minutes have gone up, their ability to check has been really, really strong. They’re a really good pair right now, there’s no other way to put it.” 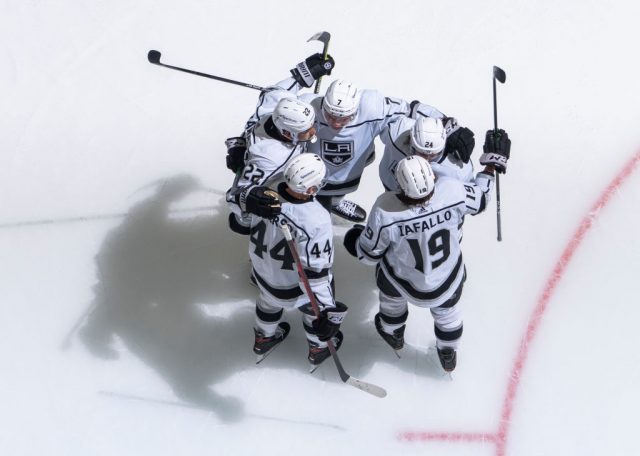 By Zach Dooley
34 Comments
Behind the Scenes