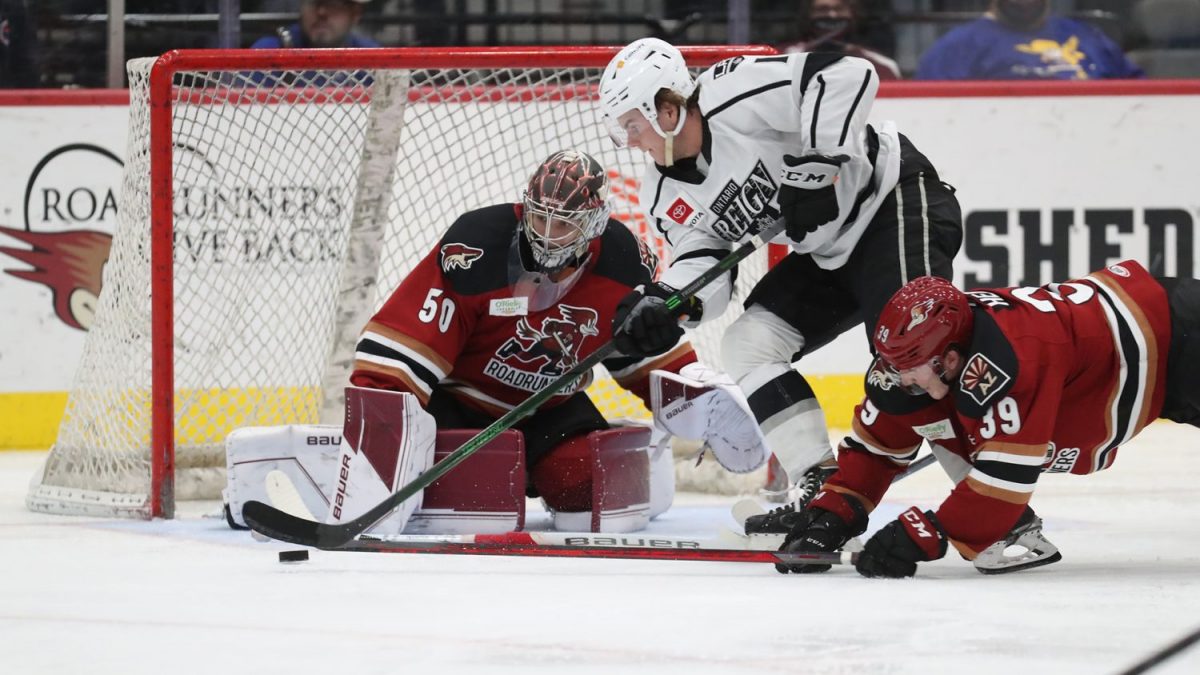 TONIGHT’S MATCHUP: After their first regulation loss of the 2021-22 season Friday, the Ontario Reign are looking to bounce back and earn a split of a weekend series in Tucson against the Roadrunners on Saturday night. The one loss was enough to drop Ontario out of the top spot in the Pacific Division standings, as it now looks up at the Stockton Heat who have won eight straight games. Friday’s win moved Tucson up from seventh into fifth place in the division with a points percentage of 0.500.

WHAT TO WATCH FOR: The Reign have three skaters on the active roster with point streaks at four or more games led by Martin Frk, who has been on the scoresheet in six straight. Forwards Alex Turcotte and Vladimir Tkachev have posted points in four straight contests, while forward Aidan Dudas has netted goals in three consecutive outings. The Reign rank second in the AHL on the power play with a conversion rate of 26.5%, while Tucson bumped their percentage up to 18.4% Friday with three tallies. Ontario has a penalty kill percentage of 72.1%, while the Roadrunners sit at 76.3%. After losses in their first two matchups with Tucson last season, the Reign were victorious in their final six meetings with the Roadrunners.

LAST TIME OUT: The Reign suffered their first regulation loss of the season Friday, falling 8-4 to the Tucson Roadrunners at the Tucson Convention Center. Aidan Dudas and Martin Frk each posted a goal and an assist for Ontario in a losing effort, while Alex Turcotte and Jordan Spence recorded two assists apiece. Ontario had previously earned at least a point from all 10 of its contests to begin 2021-22. The LA Kings’ AHL affiliate is now in second place in the Pacific Division standings with a .864 points percentage.

FRK’S HOT STREAK: After recording multi-point games in all three of Ontario’s contests last week, forward Martin Frk was named the AHL’s Player of the Week for the first time in his nine-year pro career. Frk posted four goals and six assists for 10 points in the three outings to take over the league’s scoring lead with 16 total points. His first two nights featured four-point efforts, each with two goals and two assists, on his way to being named the first star of the game. Frk extended his multi-point game streak to five on Friday with a goal and an assist in a losing effort at Tucson. Overall, his nine goals lead the AHL, while his 18 points are tied for most in the league. The Pelhrimov, Czech Republic native is also leading all AHL skaters with a +10 rating and ranks sixth with 40 shots on goal.

DAZZLING DUDAS: Reign forward Aidan Dudas has posted goals in three straight games for Ontario, the longest run of his pro career. The Parry Sound, Ont. native found the back of the net in a win at Bakersfield last Saturday, scored in the first period of a home win over Colorado on Sunday and then struck in the second period of Friday’s loss in Tucson. Dudas also added an assist on captain Brett Sutter’s first period tally Friday to record his first multi-point effort of the season. Overall, he ranks second on the team with five goals in Ontario’s first 11 games.

SCOUTING THE ROADRUNNERS: Tucson began the 2021-22 season with three consecutive series splits against Stockton, Texas and San Diego before falling on back-to-back nights to Henderson last weekend. After scoring a hat trick in Friday’s win, forward Matias Maccelli leads the team in scoring with nine points on three goals and six assists. Attacker Hudson Fasching is just behind Maccelli with eight points in the team’s nine games on four goals and four assists. Defender Janis Moser leads the team’s blueliners with four points (2g, 2a). In net, Ivan Prosvetov has gotten the majority of the playing time and holds a 3-2-1 record that includes two shutouts in six appearances. His goals-against average of 2.32 and .907 save percentage both lead the team.

TURC’S TUCKS: Reign forward Alex Turcotte posted goals in back-to-back games last week and is currently on a season-high four-game point streak. After recording an assist in Henderson last Wednesday, the second-year attacker scored in Bakersfield on Saturday by knocking a puck out of the air and into the net. Then on Sunday, Turcotte opened the scoring with his third tally of the year just 1:01 into an eventual win over Colorado. Through the team’s first 11 games of 2021-22, the Island Lake, Ill. native has nine points on three goals and six assists.

TKACHEV HANDING OUT HELPERS: Vladimir Tkachev has shown off his skill since joining the Reign, earning assists in each of his first four career AHL games. The forward had one helper in his first appearance in Henderson last Wednesday before adding a pair of assists in wins over Bakersfield and Colorado on Saturday and Sunday. Most recently, Tkachev set up Martin Frk for his league-leading ninth goal of the season late in the second period of Friday’s loss in Tucson. The Omsk, Russia native began his first pro season in North America with the LA Kings, posting two assists in four contests.