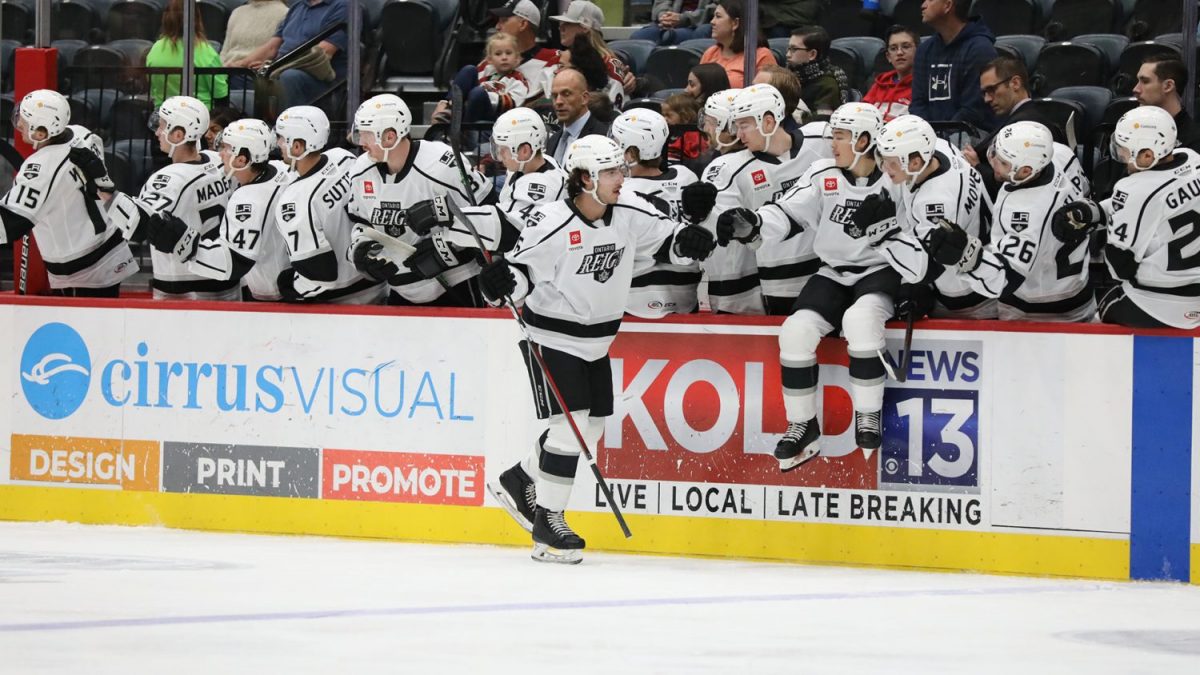 A bounceback effort propelled the Ontario Reign (10-1-0-1) to a 6-3 win on the road over the Tucson Roadrunners (4-5-1-0) Saturday night at the Tucson Convention Center. Led by forward Samuel Fagemo, who became the first Ontario player to record a hat trick this season, the Reign won for the ninth time in their last 10 games.

Defender Sean Durzi also had a big night for Ontario in the victory, scoring two power play goals and adding two assists for his second 4-point effort of the 2021-22 campaign. In addition, forward Vladimir Tkachev picked up three assists and goaltender Garret Sparks earned the win with 27 saves.

More from Head Coach John Wroblewski and Fagemo below.

Durzi put Ontario in front early when he capitalized on a 5-on-3 power play opportunity with a shot that beat goaltender Josef Korenar up high to make it 1-0 at 5:05. The assists on the strike went to Tkachev and Martin Frk. With the helper, Frk extended his current point streak to six games.

Minutes later, Fagemo one-timed a shot past Korenar on a feed from Tkachev to open up a 2-0 lead for Ontario. Durzi added the second assist on the play for his second point of the evening.

Ben McCartney got the home team on the board at 10:43 of the opening frame with a power play tally that cut Ontario’s lead to 2-1. The Reign held on to the slim advantage into the first intermission after killing back-to-back late penalties to Frk and Tkachev.

Ontario found the back of the net three more times during the second period to take a commanding 5-1 lead. First, Fagemo scored his second of the night by deflecting a shot from Durzi past Korenar at 1:03. Next, it was Durzi who struck for the second time, posting his fifth of the year on the power play at 4:59 from Tkachev and forward Tyler Madden.

Then at 11:34 of the middle frame, Fagemo took advantage of a turnover in the Roadrunner end and netted his third of the night unassisted to complete the hat trick. Fagemo now has six goals overall on the season.

Tucson cut the lead down to three before the second intermission when Janis Moser scored at 17:55 to make it 5-2 Ontario.

A penalty-filled third period didn’t see any special teams goals scored until the final minutes. Brett Sutter scored his second tally in as many nights for the Reign with an empty-net goal prior to a late power play strike for Tucson’s Jan Jenik.

Both clubs finished with two goals on the man-advantage as Ontario ended 2-for-6 and the Roadrunners were 2-for-9.

Tucson had the edge in shots on net by a 30-28 margin. Korenar turned aside 22 Ontario chances in a losing effort for the Roadrunners.

The Reign are back in action next Sunday, November 21, when they host the Stockton Heat in the first of two home games at Toyota Arena beginning at 3 p.m. PST.