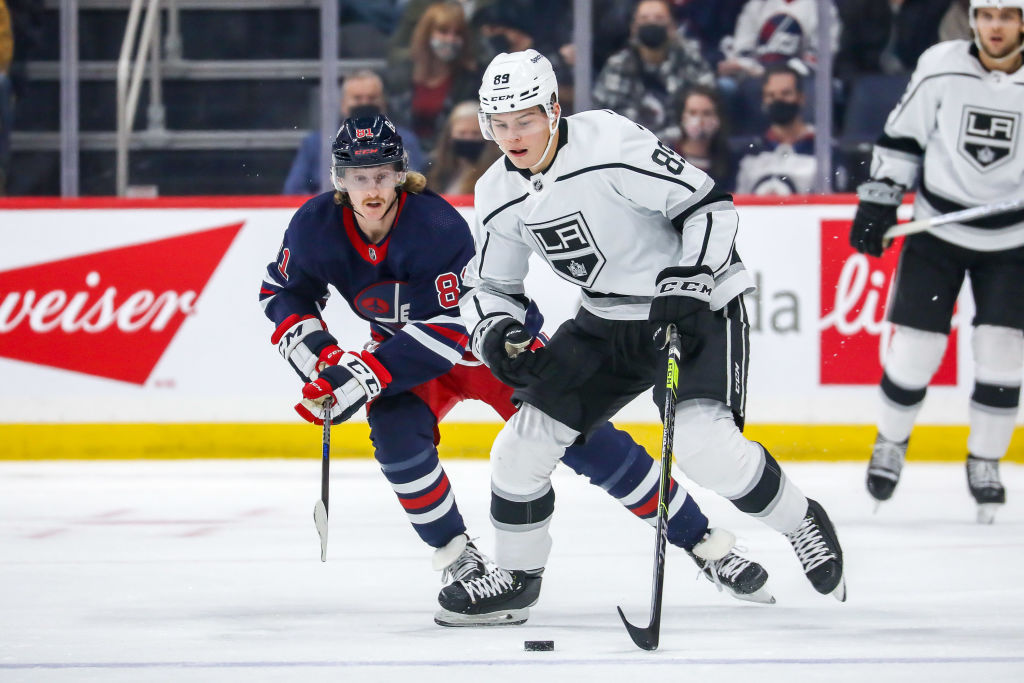 The LA Kings have now earned points in eight straight games, though they saw their winning streak come to an end in Winnipeg, following a 3-2 overtime defeat against the Jets.

Forwards Carl Grundstrom and Brendan Lemieux scored for the Kings, who capped off their road trip at 3-0-1, earning points from all four games played in Canada.

It took less than two minutes to get the first goal of tonight’s game, as forward Kyle Connor scored for the eleventh time this season to put the Jets ahead. After Cal Petersen made a pair of saves, the third rebound fell to Connor at the back post, where he slotted home for the game-opening tally.

The Kings responded well, however, as Grundstrom scored his third goal of the season to tie the game at one. Trevor Moore made a nice clearance along the boards, as he took a hit to make a play, which sprang Grundstrom on a 1-on-1 down the right wing. He drove into the right-hand circle and snapped a shot over Winnipeg netminder Connor Hellebuyck’s glove hand to knot pull the Kings level.

After a back-and-forth start to the second period, the visitors took their first lead of the evening, thanks to another timely tally from the fourth line. Leading an odd-man rush in transition, Blake Lizotte fired a shot off of Hellebuyck’s far pad, with Brendan Lemieux crashing the net to bury the rebound for the goal, his second of the road trip and the season.

Winnipeg came back with a shorthanded goal to tie the game at two. With the Kings on a power play in the latter half of the third period, the Jets led a rush the other way, with the puck eventually finding defenseman Dylan DeMelo in the slot, where his shot appeared to hit a Kings stick and go past Petersen for the game-tying goal.

After the two teams reached overtime, Winnipeg won the extra point 32 seconds into overtime, as Mark Schiefele sent a one-timer off the rush in for the game-winning goal.

Hear from Grundstrom, Lemieux and Todd McLellan following the game.

Carl Grundstrom
On his goal, and how he read the situation and put it home
I saw I had the 1-on-1 opportunity and I thought I had a pretty good opportunity to shoot it too. I just took a shot and tried to hit the short side.

On the play of his line tonight
I think this was probably our line’s best game of this trip. Even though we lost today, it was a big step for our line. I think we helped each other out a little bit better than we did in the other games.

On what the Kings did well to suppress Winnipeg, especially in the second period
We played tight, we didn’t give them anything for free. They have a really good forward core, so we didn’t want to let them get anything for free and I think we did a good job.

On the momentum generated by the team on this road trip
It’s huge. We played great the last couple of games here, so just keep building on that. Obviously, it’s way more fun to win, so we’ll try to do that.

Brendan Lemieux
On if he can see tonight’s game within the context of the larger trip, or if it’s too close to see that bigger picture
Anytime you go to the third period with a lead, and you don’t get two points, it sucks, it feels like a loss, but in the grand scheme of things, we definitely see this trip as a win. We got back to playing road hockey the way that we should, and we’ve made some strides with our team that I think we’ll remember for the rest of the year. We’ve got a good foundation to build a successful, hopefully playoff, hockey team.

On his game of playing with sandpaper, but also using discipline
I always try to. I definitely lean on the side of being more aggressive, rather than passive, in nature. So, with that comes walking that fine line and being on the disciplined side. That’s always an internal battle that I have going on, I try to play hard, play physical, be hard to play against. Those are staples of my game, so I have to work on toning it down more than working it up, but I’m happy with the way our team is playing, like I said. With penalties, this and that, I don’t think we did a poor job of it, or we’ve done a poor job of it, finding a way to win. I’m happy with the way our team is trending.

On getting a goal against his former team in Winnipeg
A lot of friends over there, something that’s outside of hockey. It’s cool to be back in Winnipeg, but I can’t say I’m not excited to get back to some warm weather. I felt the cold, I enjoyed it, but I’m ready to get back. It’s been a long trip and I’m ready to get home.

Todd McLellan
On balancing the disappointment of tonight’s loss versus the positivity of a 3-0-1 road trip
Well, you think small picture and big picture. Right now, there’s emotion in this one and it’s a game that we’re all disappointed got away on us, because I thought we played a real solid game, maybe one of the better ones on the road. We checked, we were first to a lot of pucks, we had a tenacity to us that was real good. I think we had a really good hockey club frustrated. Two special situations, one on the power play and one in overtime, gave them the chance at a win. That part of it is disappointing, but when you look at the bigger picture, when we got on a plane and went to Toronto, we were playing well, we had some confidence and I think the confidence has grown since then. We’re believing in each other, we’re believing in the system and the structure that we’re playing. Obviously there are some areas that we need to work on and improve, but there’s 31 other teams that have to do the same. Big picture, a really good road trip. Small picture, a little frustrated for the next 25, 30 minutes and then we’ll move on.

On the third line tonight and their play
They were [good], they played a lot more direct, they didn’t go 1-on-1 through the neutral zone, we saw that creeping into their game in Ottawa a little bit, and in Montreal, but that line has been pretty good for us. They’re not pretty, but they are effective. The amount of grind time that they come up with along the boards, and in front of the net, their tenacity on the backcheck is effective. They often hand off, we talk a lot about it, hand off a good shift to the next line. There’s a lot of value in that.

On his growing confidence in his entire lineup
Absolutely. When things are going well and everyone’s playing well, you want to reward them, you want to put them on the ice, you don’t want to shorten the bench. I want them looking back and me and saying hey, put me on the ice again, and when you’re going well that’s easy to do, but you have to bring it. Confidence is gained and lost by what you do on each, individual shift. I think of Lizzo’s line, with Arty and Lemieux, they’re doing some really good things on every shift, and go do it again, do it more. In turn, it gives Kopi and Danault, their lines, a little breather and it allows us to be effective longer in games.

On Brendan Lemieux’s ability to balance physical play with discipline
He’s a crafty player, he knows his trade, he knows what he should be doing and shouldn’t be doing. He adds a lot of spice to our team, we missed that early in the season, so we appreciate him bringing that to the group. Tonight, there were opportunities where he could have crossed the line, and put us down for two minutes by a man, but he made good decisions. He stayed out of the emotional stuff, which is important. That’s effective, and we appreciate that from him.

On his thoughts on the overtime period
I thought we gave up too much ice on the entry and they turned what was a 2-on-2, a soft 2-on-2, into almost a 2-on-1, we didn’t play it real well. They’re crafty players, they know how to create that situation, they did a good job. Sometimes you have to give the opposition credit too.

– This run of games (3-0-1) marked the fifth time since 2004-05 NHL Lockout that the Kings have picked up a point in all four games on a four-game road trip.
– Forwards Brendan Lemieux (goal) and Blake Lizotte (assist) made it two points from their last three games after connecting on a second-period tally.
– Trevor Moore tallied his first assist of the season with the long helper on Grundstrom’s goal.
– Defenseman Mikey Anderson was a +1 tonight, was +7 on this road trip and is +8 on the team’s eight-game point streak.
– Defenseman Matt Roy logged a team-high 24:36 of ice time in tonight’s game. Four of the Kings six blueliners played more than 20 minutes tonight.

The Kings are slated to return to Los Angeles this evening, and are not scheduled to skate tomorrow.