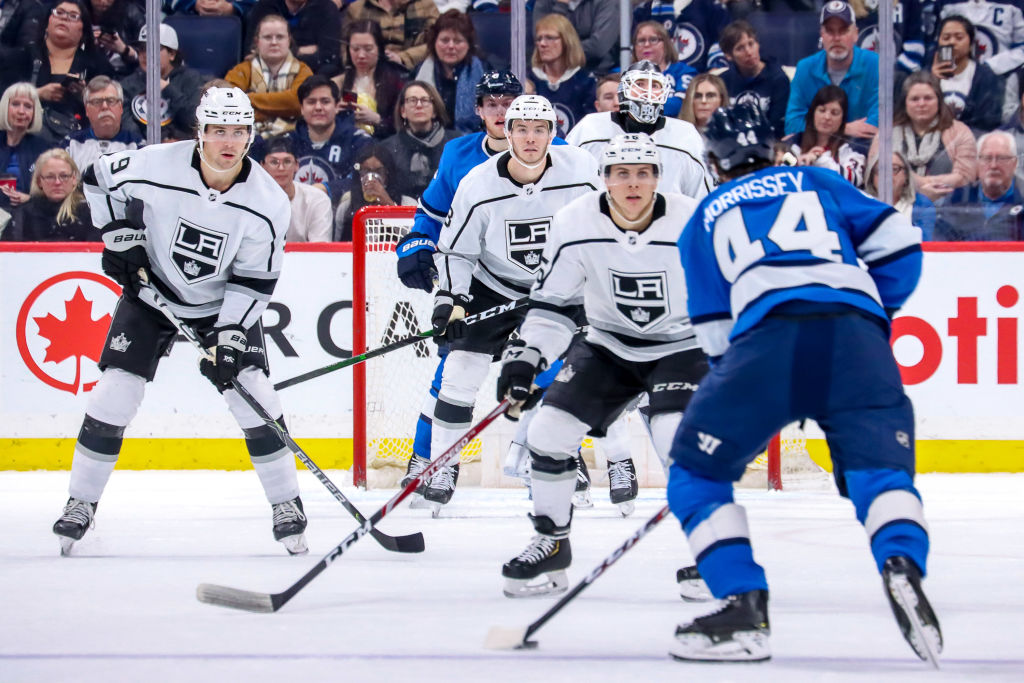 TONIGHT’S MATCHUP: The Kings conclude a four-game road trip this evening as they visit Manitoba for the first time with a meeting against the Winnipeg Jets.

HEAD-TO-HEAD: The Kings and Jets faced off once earlier this season, at STAPLES Center, with Winnipeg prevailing by a 3-2 final. Forwards Rasmus Kupari and Adrian Kempe each scored in defeat against the Jets, while Arthur Kaliyev, Alex Iafallo and Phillip Danault each tallied an assist. Throughout his NHL career, forward Anze Kopitar has 26 points (9-17-26) from 26 career games against Winnipeg. The two teams will conclude the season series on April 2 here in Canada.

KINGS VITALS: The Kings enter tonight’s game winners of seven straight games, with the opportunity to complete their road trip with a perfect 4-0 record.

The Kings did not hold a morning skate today, so we won’t know for sure on tonight’s lineup until later this evening. Assuming the rotation in net continues, however, it would point to Cal Petersen getting the nod in goal tonight. Petersen, who has won four of his first six starts this season, did not play the first game against the Jets and has faced them just once in his NHL career, when he made 29 saves on 34 shots in a 6-3 defeat in this building in February 2020.

Yesterday’s practice did not give us any direct indications of a potential lineup change, though with the team riding a seven-game winning streak, we won’t project any here. One note of interest is that Lias Andersson skated in a regular jersey during yesterday’s practice, which indicates that he is closing in on a return to the lineup. Here’s how the team set up in Ottawa on Thursday –

JETS VITALS: After they dropped each of their first three games to open the season, Winnipeg has been consistently hot over their 10 games since, with points in all but one of those appearances, including seven victories.

In net, expect to see workhorse netminder Connor Hellebuyck get the start between the pipes, per Scott Billeck of the Winnipeg Sun. Hellebuyck has started all nine of the games he’s been available for, missing one four-game stretch due to illness. On the season, the Michigan native is 4-2-3 with a .909 save percentage and a 2.97 goals against average.

Per Mitchell Clinton of the team’s official website, here’s how line rushes went during yesterday’s practice –

Forward Paul Stastny was the only Jets player not to skate yesterday, and Billeck confirmed that Stastny will not play tonight for the Jets. Stastny blocked a shot earlier this week against the New York Islanders and has missed the two games since.

21 Jump Streak
Yesterday’s practice report touched on the team’s current run of form, with seven straight wins, including three here on the road.

On an individual front, forward Adrian Kempe is currently riding the longest point streak of his NHL career, extended with a secondary assist on Anze Kopitar’s power-play goal in Ottawa. Kempe has points in six straight games, which is one higher than his previous career mark of five during February 2019. The 25-year-old forward set his career high for a goal streak during that run, with tallies in four straight games from 10/30 through 11/9.

Winning (Different) Ways
The Kings are finding ways to win games right now. The shutout win on Thursday was just another way to come out on top for this group. After yesterday’s media availability, Blake Lizotte and Andreas Athanasiou spoke on the group’s mentality in winning games in different ways.

Lizotte – Our saying in the locker room right now is that good teams find a way to win in all sorts of fashions. Whether that’s a comeback win or a grind it out game, whatever that might be, good teams need to find a way to win every game and every game’s not going to be the same. You play the games, there’s a lot of good teams, you see them every night and it’s been good for our group to learn how to win in different ways.

Athanasiou – I think we have a good feeling when we get on a run like that, and we’ve been doing it in all types of ways. It’s good to see that we have a lot of capabilities, a lot of different ways to win games and fun to be a part of it for sure.

Winnipeg presents a new challenge, with a solid lineup and another team that has played good hockey here in the early goings of the season. Their depth up front is among the league’s best, and the Kings will need to continue with the mantra that Lizotte talked about to find success this evening.

On Brand-t
Lastly, in case you missed this from the other day, hear from the LA Kings first-round selection in the 2021 NHL Draft, Brandt Clarke. Clarke joined the Bally Sports West broadcast from Toronto, where he met up with the traveling party during the day.

The 18-year-old defenseman made the trip from Barrie to Toronto, just under 60 miles apart. Clarke has been off to a hot start with the OHL’s Barrie Colts, ranking second on the team with 15 points (5-10-15) from 11 games played.

Clarke talked about how the Kings integrated him into their morning routine before the game against the Maple Leafs, meeting and talking with some of the Kings veterans, his season thus far with the Colts and how he’s progressed with the organization since being drafted.

By Zach Dooley
5 Comments
Behind the Scenes