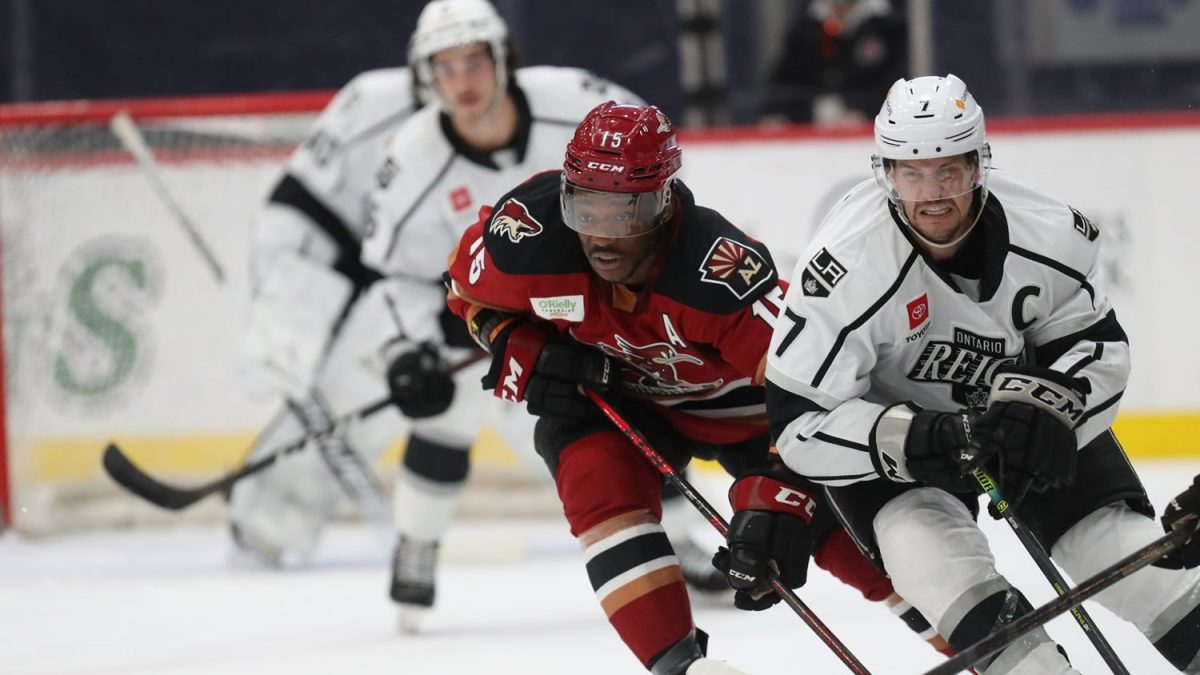 The Ontario Reign (9-1-0-1) suffered their first regulation loss of the season Friday night, falling 8-4 to the Tucson Roadrunners at the Tucson Convention Center. Aidan Dudas and Martin Frk each posted a goal and an assist for Ontario in a losing effort, while Alex Turcotte and Jordan Spence recorded two assists apiece.

Frk extended his point streak to six games, while Turcotte’s assist pushed his season-high run to four games and Vladimir Tkachev earned an assist for a fourth consecutive outing. Ontario had previously earned at least a point from all 10 of its contests to begin 2021-22. The LA Kings’ AHL affiliate is now in second place in the Pacific Division standings with an .864 points percentage.

The Roadrunners took the lead 8:03 into the opening frame on a goal by Cameron Hebig, but Brett Sutter evened the game back up at 1-1 just 36 seconds later with his second goal of the year from Dudas and Jacob Doty.

Ontario then went in front on a goal by defender Jacob Moverare at 14:53, but once again the advantage was short-lived, as Tucson tied things at 2-2 on a goal by Jan Jenik less than two minutes later at 16:43.

Dudas put his fifth goal of the season past Roadrunners’ netminder Ivan Prosvetov at 4:13 of the second and give the Reign a 3-2 lead, but Tucson again showed an immediate response.

Matias Maccelli scored his first of three goals at 4:51 to bring the teams into a 3-3 deadlock before Michael Carcone put the Roadrunners in the lead at 5:18 and former Ontario forward Bokondji Imama extended the advantage to 5-3 with a goal against his former club at 9:11. The Reign made a change in goal after Imama’s tally, replacing Matt Villalta with Garret Sparks.

Despite a five-minute major power play opportunity for Ontario when Tucson’s Hudson Elynuik was called for kneeing Dudas, the Reign were unable to capitalize.

Ontario did get back within one on Frk’s league-leading ninth goal of the year before the end of the second at 17:32, which had assists from Tkachev and Turcotte. Overall in the middle period, the Reign had a 14-5 edge in shots on goal.

Tucson controlled the third period, however, out-shooting the Reign 14-5 in the frame and converting three times on the power play. Maccelli netted his second of the game just 32 seconds into the frame before Janis Moser found the back of the goal at 7:14. Maccelli then capped off the scoring by completing the hat trick at 13:46.

The penalties piled up for both teams in the third period. Ontario had eight infractions which accounted for 24 minutes in penalties, while Tucson was whistled five times for 10 minutes. Friday’s game was also the first time this season that the Reign went without a man-advantage tally, finishing 0-for-4 on the power play. All the Roadrunners’ extra-attacker goals were scored in the third, finishing 3-for-5 on the power play in the game.

Prosvetov picked up the victory for Tucson with 19 saves. Villalta suffered the loss with six stops in 29 minutes of action, while Sparks ended with 11 saves in relief.

The two teams go head-to-head once again on Saturday night at the Tucson Convention Center. The puck is scheduled to drop at 6 p.m. PST.

John Wroblewski
His overall thoughts after the game
It wasn’t a great effort, that’s for sure. Disappointing, because after a week off we’d expect to have a little more jump. They were exactly what we anticipated in regard to work ethic, tenaciousness on the puck. There’s a lot of reasons for the loss but for whatever reason, we did not have the jump that we normally have and sometimes when we have a rough start then we usually find it. It’s certainly a concern but we’ll let it marinate and see what the tape looks like. Hopefully we get better individual efforts to start and then we’ve got game management things we have to discuss. The goals were tangible turnovers, it wasn’t bad bounces. You’ve got to give credit to Tucson for their tenaciousness but a game recognition of us 40-seconds into shifts turning pucks over, turning pucks over in the high ice, too many breakaways against, just not sharp at all mentally or physically.

On what it was like to coach in this type of a game
We always have a chance with our firepower. 5-4 going into the third and you’re saying alright let’s get this kill and see what we can do from there and you’re still optimistic after giving up the sixth one. It wasn’t our night, let’s just put it that way. We’re not going to allow that to be an excuse but that’s for sure it. We have to address why it wasn’t our night and I know that there’s a lot of guys in there that aren’t going to take that as acceptable and hopefully we’ll have a better effort tomorrow night and rebound.

On the team sticking up for each other
It’s a great group of guys. We’re all disappointed with the effort, coaching staff included. For whatever reason, we weren’t ready to go from the drop of the puck and we’ve got to be aware of that. Having a week off and coming out with that is on us too, it’s not just on the players. If they didn’t feel prepared or if they were overworked, we’ve got to address that and we’ve got to learn from it because it really was a dismal performance pretty much from top to bottom.